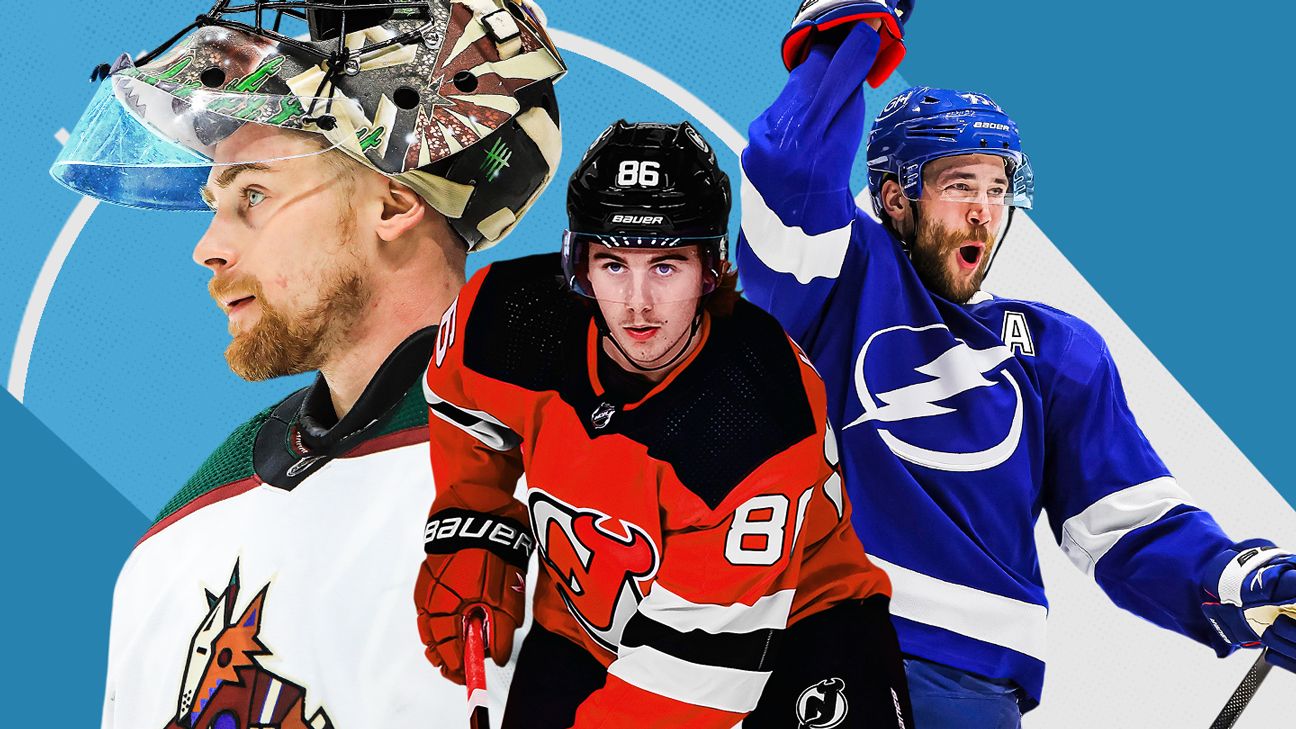 It’s certainly been a tumultuous start to the week, given a slew of additional game postponements due to COVID-19 — and many players and team staff entering the protocol — but the Power Rankings march on. And for the second straight week — and fifth time this season — the Florida Panthers top our list.

But every team from one through 32 has at least one thing at which they excel, and we took this opportunity to identify every team’s “superpower” too.

How we rank: A panel of ESPN hockey commentators, analysts, reporters and editors rates teams against one another — taking into account game results, injuries and upcoming schedule — and those results are tabulated to produce the list featured here.

Note: Previous ranking for each team refers to last week’s edition, published on Dec. 8. Points percentages are through Tuesday’s games.

Superpower: Depth. Aleksander Barkov missed 11 of Florida’s first 27 games. Anthony Duclair has been in and out of the lineup. How have the Panthers stayed elite? Depth of contributions. Over half of the team’s roster is in double-digit point totals, the Panthers have been limiting shots against and Sergei Bobrovsky is rebounding admirably. Super stuff.

Superpower: Consistency. The Capitals appear unflappable. They have not lost consecutive games in regulation and they have not been shut out this season. When one area isn’t firing as well — like the power play lately — the penalty kill aligns to keep pucks out of the net. Washington is a well-oiled machine.

Superpower: All-around all-stars. There are no real glaring holes for the Hurricanes. They can do it all. Carolina is top 10 in goals, the league’s best in goals against, sits over 20% on the power play, is top three on the penalty kill, has a star in Sebastian Aho and is getting Frederik Andersen‘s best work in years.

Superpower: Soup-er stars. The Leafs don’t have (or need) a single MVP. One night it’ll be Auston Matthews dangling through the D. Next, it’s William Nylander tickling the twine. John Tavares is a constant threat. And Jack Campbell‘s been elite in net. No Mitch Marner? No problem for Toronto.

Superpower: 5-on-5 play. Minnesota is tough to beat at even strength. Through 28 games, the Wild had scored the second-most 5-on-5 goals (68) and had the third-best 5-on-5 shooting percentage (9.7%). During its recent eight-game win streak, Minnesota allowed the second fewest 5-on-5 goals in the league in that span (10). Who needs to go on a power play when you can do all that?

Superpower: All the offense. Colorado can hardly be stopped. The Avalanche have the best 5-on-5 shooting percentage in the league (10.5%), so it’s no surprise they also average the most goals per game (4.32). Colorado scored five or more goals in 10 of its first 24 games and recently went three straight games with seven goals scored in each. Fire.

Superpower: Resiliency. How many teams could be dealt Tampa’s hand and still thrive? The injuries (Kucherov! Point! Cirelli! Cernak! Bogosian!) have piled up and the Lightning have made no excuses. Even after a lopsided shutout loss in Ottawa and amid penalty kill struggles, there’s little doubt the Lightning will rally. As usual.

Superpower: Special teams. You could argue Trevor Zegras might have actual superpowers after that “Michigan” goal, but I digress. The Ducks have been among the NHL’s best all-around clubs on special teams. Through 30 games, Anaheim was the only team landing in the top five in the power play (25.3%) and penalty kill (86.7%). Just one more example of the Ducks flying well past all previous expectations for this season.

Superpower: Shesterkin. Yes, Igor Shesterkin was sidelined by lower-body injury earlier this month. And yes, the Rangers won without him. But two victories over the Blackhawks and one over Buffalo does not lessen the super status of Shesterkin’s stellar play. And a bonus: Shesterkin is skating again, on his way back from that injury.

Superpower: Stinginess. Before Calgary’s season was paused due to COVID-19, Darryl Sutter’s group was locking things down against everyone. Through 28 games, the Flames had ceded the fewest 5-on-5 goals (37), were 31st in goals against per game (2.21) and fourth in shots against per game (29.3). Good luck getting through that.

Superpower: Overachieving. Who penciled the Predators in as a top Central Division contender? Don’t see many hands raised out there. Nashville has outshot expectations early, thanks to great starts by Matt Duchene, Mikael Granlund and Juuse Saros. A top-10 power play and being top five in shots against has helped too. And the Predators are still rolling on a five-game win streak.

Superpower: Comeback kids. It’s not every team that gets better as games go along, but St. Louis can claim it. The Blues are the NHL’s best team when trailing after the first period (.625 winning percentage through their first 28 games) and they’re in the top third of the league when trailing after 40 minutes. The second period is really when the Blues shine, outscoring opponents 35-22. St. Louis stays in it until the end.

Superpower: Jarry-good goaltending. Forget all the players Pittsburgh has been missing. Tristan Jarry has been available, and he’s been the team’s MVP. While bodies have moved in and out of the Penguins’ lineup, Jarry has remained steady and produced incredible numbers through 21 starts (12-5-4, .934 save percentage, 1.92 goals-against average).

Superpower: Adaptability. The Golden Knights have no fear of curveballs. They’ve seen it all. COVID-19 issues, injuries to key players (Max Pacioretty, Mark Stone and William Karlsson specifically), salary cap snafus and a slow start that had critics burying Vegas in October. No bother for the plucky Golden Knights, who are still firmly in the playoff mix.

Superpower: Stayin’ alive. Boston stepped into the playoff picture for the first time this season last week by doing what it does best: no matter what, keep moving forward. The Bruins didn’t have coach Bruce Cassidy behind the bench due to COVID-19, Jake DeBrusk‘s trade request is distracting, trusted forwards have sputtered and the team’s goaltending has been shaky at times. And yet, Boston continues to find a way through it all.

Superpower: One-two punch. Things haven’t been great for the Oilers lately. Nor has it been a great run in December for Connor McDavid and Leon Draisaitl. However, having those players anchoring Edmonton’s top six is what makes this team go. It makes them special. And there’s certainly time for a turnaround.

Superpower: Top tandem. The Stars don’t score a lot. That’s less of a problem when Braden Holtby and Jake Oettinger are tag-teaming between the pipes. The rookie Oettinger went 5-1-0 with a .951 save percentage in his first six starts this season, and Holtby had a .923 save percentage through his first 14 games. If Dallas can get out of the bottom third in scoring, the Stars will really rise.

Superpower: Top-tier effort. Winnipeg gets a lot out of its key players. When adversity strikes, that consistency keeps the Jets aloft. Kyle Connor (32 points in his first 27 games) has gone multiple games without a point only once. Pierre-Luc Dubois has already passed last season’s point totals. And now Nikolaj Ehlers is stepping up too. Those efforts — and even more from Mark Scheifele — will be crucial to Winnipeg surviving the latest injury to Blake Wheeler.

Superpower: Killer instinct. The Sharks have had an up-and-down season, except for one area: the penalty kill. No matter what’s befallen the Sharks, San Jose continuously draws momentum from its special teams. Over the season’s first 28 games, the Sharks had allowed multiple power-play goals against them only once, given up the second fewest man-advantage goals overall (10) and been top five overall on the kill throughout.

Superpower: Home cookin’. Home is really where the heart is for Columbus. The Blue Jackets owned a 9-3-1 record through 26 games at Nationwide Arena and outscored opponents 47-33 on home ice.

Superpower: Veteran moves. Anze Kopitar. Drew Doughty. Jonathan Quick. That’s it. That’s the list. When those three are the Kings’ best players, which they have been (when healthy) this season, Los Angeles can look great. And everyone else knows to follow their lead.

Superpower: “Bruce, there it is.” Ignore everything that happened before Bruce Boudreau’s arrival in Vancouver (just for a second). The Canucks responded well to their new coach, starting 4-0-0 with Boudreau behind the bench. For now, at least, things are looking up.

Superpower: Rising stars. It’s been a weird month for the Red Wings, with a five-game win streak stuck between sets of consecutive losses. But like a microcosm of Detroit’s season, those five games highlighted the true strength of its team: young talent. Lucas Raymond had three goals, Moritz Seider had four points and Dylan Larkin had five. The more Detroit gets from them, the merrier.

Superpower: Scoring threats. New Jersey might be middle of the pack in scoring, but it has gotten some seriously talented shooters. Jesper Bratt is having a career year, Andreas Johnsson is also playing some of his best hockey and Dawson Mercer‘s impressive rookie season has earned plenty of attention. When they’re all creating, the Devils are fun to watch.

Superpower: Carter Hart. The Flyers don’t help Hart out much, but the young netminder muddles along well regardless. Philadelphia averages the most shots against in the NHL and Hart still owned a respectable .913 save percentage and 2.91 goals-against average through 17 starts. In short, Hart gives Philadelphia a chance most nights, and that’s pretty super.

Superpower: Leadership pedigrees. Is it too late for the Islanders to recover from a 7-11-5 start through 23 games (which included an 11-game winless streak)? Maybe. And you can only give New York the benefit of the doubt because it’s got Barry Trotz and Lou Lamoriello. If any coach-GM tandem can guide a team through this muck, it’s them.

Superpower: Seen it all. There’s no other way to put it: The Blackhawks have seen it all at this point. Never mind the off-ice sexual assault investigation and subsequent front office purge. From starting 1-9-1 under Jeremy Colliton to winning seven of their next 10 under Derek King, from overachievers and underperformers, Chicago’s run the gamut. And when you’ve already weathered so much together, it can help unite a dressing room like nothing else.

Superpower: Creating (franchise) history. Everything the Kraken do is being done for the first time. The highs and lows of an expansion team’s first season are only experienced once. Each game, each record, it’s milestone city and only this group of players gets to go through it. That excitement can fuel a roster.

Superpower: No excuses. The Sabres could blame the Jack Eichel trade or Craig Anderson‘s injury for their doldrums. But Buffalo has tried to keep on a positive path. The results haven’t been there often lately, but Kyle Okposo and Tage Thompson have led the way in dragging Buffalo along.

Superpower: Rattling the cage. The Senators draw a lot of penalties (averaging over four per game). They’re annoying that way. Ottawa wants to channel its inner Brady Tkachuk and get under the skin of opponents. It’s also a team that aims to play hard. When Ottawa achieves that (and gets good goaltending, natch), it has toppled even top teams like Tampa and Carolina.

Superpower: Carey Price. It’s assumed that goaltender Price will be back at some point, and do the Habs ever need him. Someone find that man a cape.

Superpower: Staying in Arizona. No amount of unpaid taxes or loss of venues will change Gary Bettman’s mind about moving the Coyotes out of Arizona. For now, anyway.