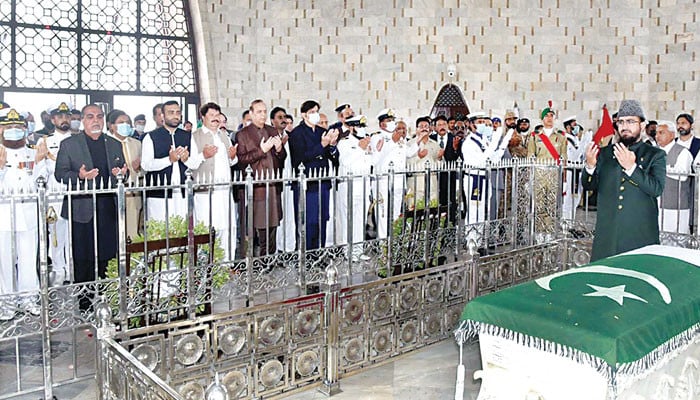 KARACHI: The nation celebrated the 145th birth anniversary of Father of the Nation, Quaid-i-Azam Muhammad Ali Jinnah, across the country with traditional zeal and fervour.

Quaid-i-Azam was born on Dec 25, 1876, in Karachi. The day was a public holiday and the national flag was hoisted on principal government buildings throughout the country.

The day dawned with special prayers for the security, progress and prosperity of the country. A change of guards ceremony was held at the mausoleum of the Quaid.

A smartly turned-out contingent of Pakistan Military Academy took over the guard duty. PMA commandant Major General Umar Ahmad Bukhari was the chief guest. He offered fateha and laid a floral wreath at the grave of the Quaid.

Special events were held in government and private organisations to highlight the Quaid’s political struggle and his guiding principles of unity, faith and discipline.

The celebrations were aimed at educating the youth about the Quaid’s vision and Pakistan’s ideology. Early in the morning, several people from all walks of life visited the tomb to pay tribute to Quaid-e-Azam for the services he rendered for the creation of a separate homeland for the Muslims of the sub-continent.

A lawyer and politician, Jinnah served as leader of the All-Indsia Muslim League from 1913 until Pakistan’s independence on 14 August 1947, then as Pakistan’s first Governor-General until his death on September 11, 1948.