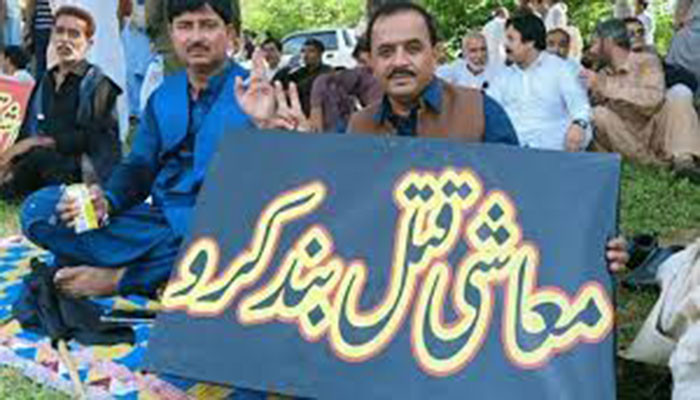 ISLAMABAD: The Supreme Court of Pakistan on Friday dismissed review petitions against its judgment striking down the Sacked Employees (Reinstatement) Act 2010 and ordered reinstatement of 16,000 employees by exercising its jurisdiction under Article 184 (3) of the Constitution.

Justice Syed Mansoor Ali Shah in his dissenting note said the parliamentary sovereignty or legislative supremacy is the cornerstone of a strong democracy and stressed recognizing the central role of the legislature. “Undermining the legislature undermines democracy,” he noted.

“For reasons to be recorded later, by a majority of four to one (Justice Syed Mansoor Ali Shah dissenting), these review petitions are dismissed,” Justice Umer Ata Bandial announced in a short order.

“However, in exercise of the court jurisdiction under Article 184 (3) of the Constitution read with Article 187, we have taken into consideration the services rendered by the reinstated employees of the “employers” [as defined in Section 2(d) of the Act]”, says the short order. The court said that the employees who were holding posts from 01.11.1996 to 12.10.1999 did not require any aptitude or scholastic or skill test, for appointment. They shall be restored from the date of the judgment under review to the posts they were holding on the same terms and conditions of service applicable to the date of their termination pursuant to the judgment under review.

“Any improvement in the terms and conditions of service of all the restored employees shall be granted strictly in accordance with the laws and rules applicable to their service or employment and in the absence thereof by regulations laid down for this purpose by their respective employers,” the short order said.

The court said relief will not be granted to employees whose initial termination of service (from 01.11.1996 to 12.10.1999) was on the ground of absence from duty, misconduct, corruption, misappropriation of money/stock or unfitness on medical grounds if such termination was not set aside finally by a court of law.

Justice Mansoor Ali Shah said both the legislature and the judicature must play their role in a spirit of profound respect for the other and within the limits set out in the Constitution. “The rule of law is not merely public order, it is social justice based on public order,” he noted, adding that the law exists to ensure proper social life by balancing the needs of the society and the individual. He said the courts must protect this rich concept of rule of law. “Under Article 8 of the Constitution, any law enacted by the legislature is void if it takes away or abridges fundamental rights of people,” the judge noted. “For the reasons to be recorded later and subject to ancillary and incidental declarations and orders (if any) to be made in the detailed judgment, I allow these review petitions in the following terms and the judgment under review is recalled,” Justice Mansoor Ali Shah held. The judge declared some sections and part of the Sacked Employees Reinstatement Act 2010 as ultra vires to the Constitution.

The provisions of the said sections, except the words one scale higher, shall remain operative with effect from the date of enactment of the act, and be read to mean the reinstatement and regularization in the same or restructured, as the case may be, scale, grade, cadre, group, post or designation, Justice Mansoor Ali Shah noted. The judge said Sections 2 (f) (vi), 11, 12 and 13 which deal with reinstatement and regularization of the employees who had been dismissed on account of absence from duty, misconduct, mis-appropriation of government money or stock, or unfitness on medical grounds, and the determination of their guilt or medical unfitness attained finality by being unchallenged or unsuccessfully challenged.

“Such employees fall outside the class of sacked employees who suffered “political victimization,” envisaged by the act for a beneficial treatment, and they by themselves do not constitute a distinct class having an intelligible differentia which bears a reasonable relation to the object and purpose of the act,” Justice Mansoor Ali Shah said, adding that all employees dismissed on the basis of the judgment under review stand restored in the service with effect from the date they were dismissed, and shall be paid the pay of the intervening period, treating the said period as an extraordinary leave with pay.

Similarly, the judge held that the cases decided by the judgment under review, which now stands recalled, shall be deemed pending and decided on their own merits by the regular bench of this court in accordance with the provisions of the Sacked Employees Reinstatement Act 2010.

After the announcement of the judgment, a large number of male and female employees belonging to various government departments standing on the Constitution Avenue celebrated their restoration and chanted slogans in favour of the court decision. “We are thankful to the court for announcing the decision in our favour,” said a sacked employee of the State Life Insurance.

In a statement on Friday, he said lawyers Nayyar Hussain Bukhari, Latif Khosa, Raza Rabbani, Aitzaz Ahsan and others presented the case of the sacked employees in the best possible manner. “Due to the efforts of the PPP, these 16,000 employees have already been reinstated by the parliament,” he said, adding that the PPP has always stood by the working class and will continue to do so.

ISLAMABAD: Prime Minister Imran Khan Monday said that the Bhutto and Sharif families were responsible for the country’s present situation.

In an interview to foreign media, he said Pakistan was rich in resources but the Bhutto and Sharif families had used the resources unfairly. He said his government wanted Pakistan to become a prosperous country and it was fighting against the two families, which were superrich. He alleged the two families were working to set up their dynasties in Pakistan and were responsible for the present mess in the country. He said corruption destroys a country and no society can survive without the rule of law.

Chairing a meeting of the government spokespersons, he said that PMLN President Shehbaz Sharif had robbed the people of their money. He alleged that Shehbaz and Hamza had been appointing people against government posts by taking bribe, and added that Shehbaz would be held accountable for each penny of money laundering.

The prime minister also directed the spokespersons to highlight the Sharifs’ money-laundering. Giving a briefing on the economic situation in the meeting of the spokespersons, Finance Adviser Shaukat Tareen said that soon the exchange rate of the dollar to the rupee would reduce as the government was providing a subsidy of one trillion rupees to the people. Imran reiterated that inflation is lower in Pakistan than in other countries of the world.

Moreover, the issue of Electronic Voting Machines (EVMs) was also discussed in the meeting of the spokespersons and the members were informed that a dead (person’s) vote was also cast in the Khanewal by-election.

Prime Minister said that the PMLN and the PPP were opposing electronic voting for the fake voting process, and insisted that EVMs were necessary for transparency in the electoral system.

Meanwhile, chairing a meeting of heads of regulatory authorities Friday, Prime Minister Imran Khan said regulators had a pivotal role to play in the protection of the rights of people, ensuring effective monitoring and compliance with the legal and regulatory requirements.

He stressed the effective role of regulatory authorities to keep a check on cartels and mafias and directed all the regulators to ensure fairness and quality of services to develop the sectors they are regulating.

Heads of all the regulatory authorities held out an assurance to the Prime Minister to take effective measures for the capacity-building of their relevant authorities to ensure better service delivery to the citizens.