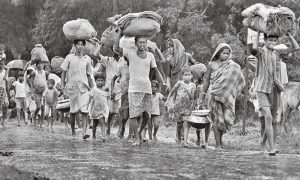 The first screening of Javed Jabbar’s documentary “Separation of East Pakistan_The Untold Story” was held at Cinepax, Packages Mall, Lahore. The documentary is all set to release on 16 December 2021.

It has been 50 years since Bangladesh also known as East Pakistan launched its war for independence, which ended in the country’s separation from Pakistan. The liberation struggle began in March 1971 and lasted nine months, ending on December 16, 1971, when Bangladesh was officially recognized as an independent nation.

Javed Jabbar is a public intellectual who contributes to a variety of think tanks, research centers, and public forums on a variety of topics. He has been awarded various national and international awards for his services and achievements. Pakistan’s famous writer, artist, and former Information Minister, Javed discloses the facts with hard evidence and verified information that formed an environment that led to East Pakistan becoming an independent country. The documentary will serve as a fact-based comprehensive narration and will provide the true picture of what actually happened in 1971.

The documentary will share that how the first president of Bangladesh, Shiekh Mujibur Rehman, did not have the vision of separation from Pakistan and how he was played by the international community. His demand was the Coalition, not the partition. It will also mention the Indian propaganda of breaking Pakistan and how they misinterpreted the facts to support the liberation movement.
The untold story of East Pakistan will also rectify the false allegations on Pakistan and how India was directly involved in it. The audience will have a view of how things actually happened. It will explain the naivety and immaturity of the political leaders of that time. Javed Jabbar, with the help of world-renowned panelists, mentions how the leadership of that time allowed the external forces to do politics and change the dynamics of the sub-continent.
The important thing is to reveal the hidden facts, not to declare victory over one another so that the nations can work together to improve their relations and strengthen their brotherly ties. After all, they were born as one. With a fact-based approach and no exaggeration, history has been demystified. The good news is that people will enjoy Javed and his team’s thought-provoking effort, which will be delivered with unprecedented clarity and accuracy.

Previous articleLog4j vulnerability: Why your hot take on it is wrong
Next articleJahangir Tareen says he ‘never gave a penny’ for Bani Gala’s household expenses

US, Pak-Afghan & the Rising Concerns over stability in the region