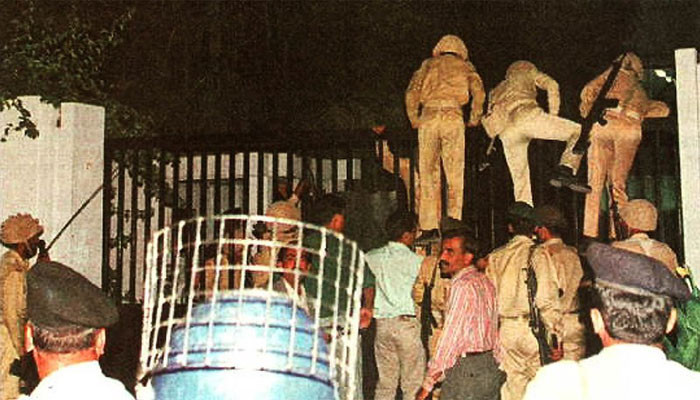 ISLAMABAD: Lieutenant General (retd) Salahuddin Satti, commander of the Triple One Brigade, which oversaw the overthrow of former Prime Minister Nawaz Sharif government on October 12, 1999, has termed the coup an unfortunate incident.

In an exclusive interview with journalist Waseem Abbasi of the Saudi Urdu News website, the former Chief of General Staff General (retd) Satti said the incident of October 12 1999 should have never occurred.

He said he met former Prime Minister Nawaz Sharif twice before the toppling of his government and found him a polite and mature person as the premier. The former head of the Triple One Brigade, who supervised the military coup against Nawaz Sharif, spoke for the first time about the incident and its aftermath. In his interview with the Urdu News, he said there is an impression that the military operation against Nawaz Sharif was pre-planned, which is totally wrong.

General Satti revealed that he was busy in Quran recitation at his residence on October 12, his birthday. According to him, the same day he was informed that Prime Minister Nawaz Sharif had removed General Pervez Musharraf and appointed General Ziauddin Butt as Chief of the Army Staff.

“I must have read half a chapter (Sipara) of the Holy Quran when my nine-year-old son came and told me that General Pervez Musharraf had been removed and General Ziauddin Butt was made the army chief. I immediately called Corps Commander Rawalpindi Lieutenant General Mahmood Ahmed but he was playing golf. I asked his wife to inform him immediately and if that has happened, then what should be our reaction,” General Satti told Urdu News.

According to him, after five to ten minutes, General Mahmood called him and told him to send some troops to stop the news of removal of the army chief. He further said that some soldiers and officers went to PTV and stopped the broadcast, after which Brigadier Javed Malik, Military Secretary to the Prime Minister, reached there, pointed a pistol at the officer and said, “You cannot do this.”

“As the commander of the Triple One Brigade, I did not go to the Prime Minister’s House or even Islamabad. I controlled the entire operation and gave instructions through mobile. Apart from sending a unit from the Presidency to PTV, some troops were dispatched to the Prime Minister’s House. But our troops did not cross the PM House’s gate till the evening when General Mahmood reached there,” Gen Satti told Urdu News.

He said the rest of the contingent was sent to the airport and there were a few key ministers who had been taken into custody by the Triple One Brigade and kept under house arrest. According to him, General Mahmood went inside the Prime Minister’s House for the first time in the evening. He was accompanied by Major General Ali Jan Orakzai and some soldiers and they brought Prime Minister Nawaz Sharif from there.

Referring to the atmosphere inside the Prime Minister’s House, he said that tension had arisen when the troops faced the newly-appointed COAS General Butt who was accompanied by highly-trained retired SSG commandos. They were armed and very active.

General Satti further stated that the commanding officer called and told me about the situation and said if Gen Butt’s commandos opened fire, then it will be difficult to handle the situation. However, the commanding officer told the armed personnel accompanied by Gen Butt to stop as they could not guarantee anyone’s life. After this warning, they stopped their movement and General Ziauddin Butt was kept under house arrest there and later shifted to the CMH because he was not feeling well.

“If it was a pre-planned operation, then how could General Ziauddin have entered the Prime Minister’s House? However, our army is a professional force, thank God not a single bullet was fired in this whole process. All I can say is that it was an unfortunate incident,” General Satti said.

He said that since he was called from Siachen in July 1999 and appointed commander of the Triple One Brigade, tensions between the military and the civilian government were at the peak.

“General Ziauddin Butt was the head of the ISI. An impression was created through the media that the military wanted to topple Nawaz Sharif’s government. However, there were no such preparations as perceived in the media,” commented Gen Satti.

Talking about his personal training, he told the Urdu News that he was the Chief of Staff at the X Corps when two years prior to this incident President Farooq Ahmed Leghari had toppled Benazir Bhutto’s government. The military was moved at that time too. Therefore, being Chief of Staff of X Corps, he knew how to make such arrangements under these circumstances.

Once the issues were resolved apparently, General Musharraf left for Sri Lanka on an official tour. What happened behind him is history now, he said.

According to General Satti, it was very unfortunate that the new army chief was announced in a room with a few people. There is a proper procedure in the army. The outgoing chiefs are given an opportunity to bid adieu and similarly the newcomer is also honored under the appropriate decorum.