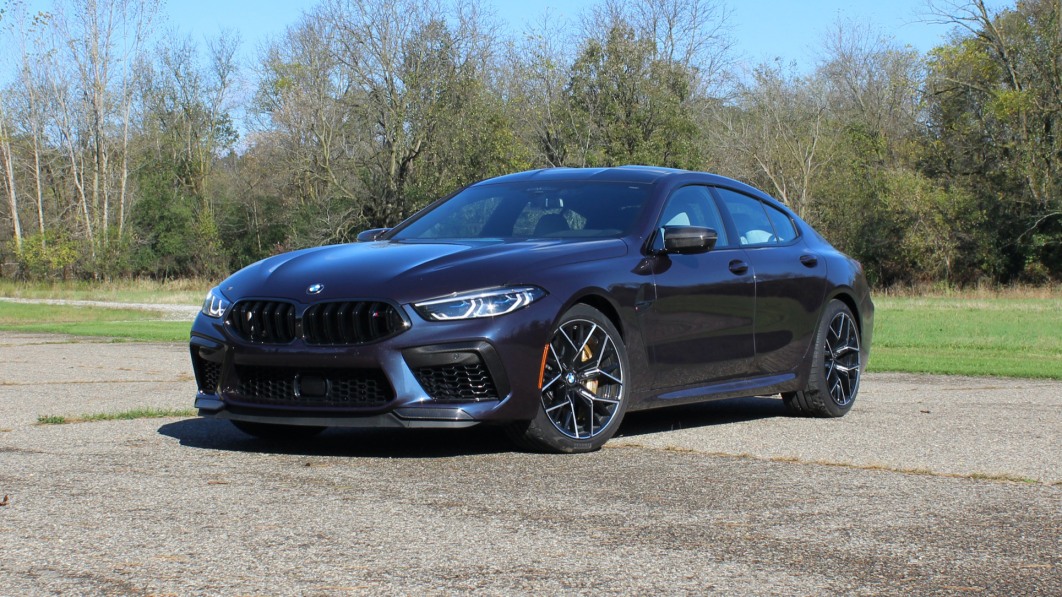 ANN ARBOR, Mich. — The BMW M8 Competition Gran Coupe posed a striking figure parked in the driveway. This tester arrived in Macau Blue Metallic paint, which, depending on lighting, presented as anywhere from a blackish void to a moonlit sky to a berry wine. The long hood ends in a toothy smile of a grille, with a lot of breathing room between it and the radiator. It had carbon fiber all over the place: Front spoiler and air intake surrounds, vents behind the wheel arches, mirror caps, rear lip spoiler, rear exhaust surrounds and the whole damn roof.

The interior mirrored this heavily carbon-clad aesthetic. In some cars, this much carbon looks gaudy, or too raw, or just out of place. It’s an apt fit for the M8, though, bringing some of the exterior aesthetic into the cabin. The M-trademark tri-color stitching and seatbelt stripes announce this car’s sporting intentions, while quilted, perforated Silverstone leather reminds you that this is a posh beast, too. The little M8 logos in the front headrests illuminate at night, drawing your eye past the windshield deep into the car’s interior.

Powered by a twin-turbocharged 4.4-liter V8 producing 617 horsepower and 553 pound-feet of torque, BMW claims it can sprint to 60 mph in just 3.0 seconds. It’s the sort of speed that comes almost too quickly and effortlessly. There’s hardly time to enjoy the barrage of sensations through acceleration before you have to ease up or otherwise find yourself in an excessively illegal and unsafe driving situation.

The powertrain’s beautiful soundtrack is also heavily filtered. You can hear the engine working its way up the rev ladder, but it’s muted and smoothed out, as opposed to the aggressive snarl you can only enjoy with the windows down. For someone outside of the vehicle, though, the M8 is likely to leave a sonic impression with a baritone idle and raspy bite as the pitch and volume elevate through the M Sport exhaust. 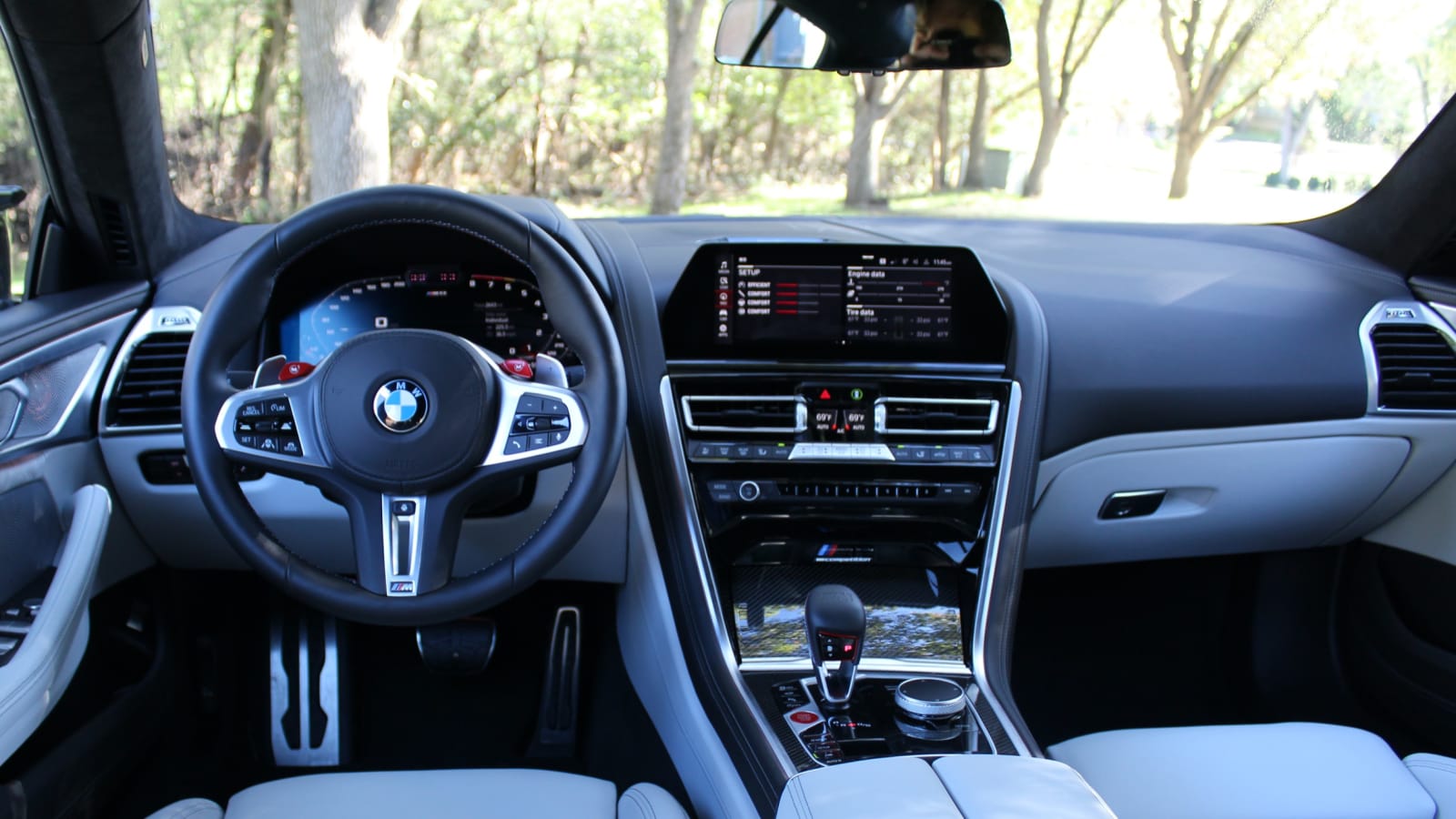 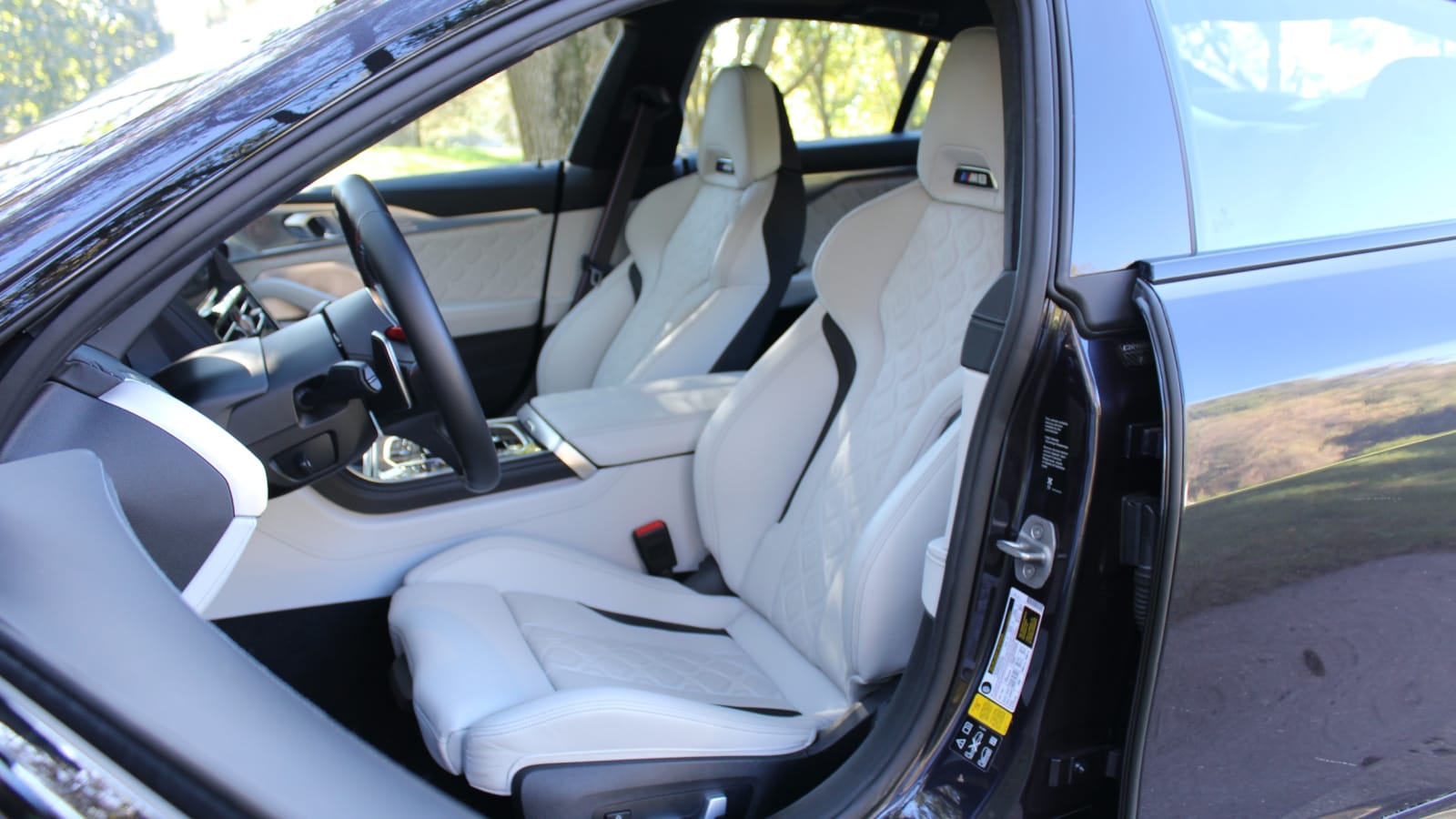 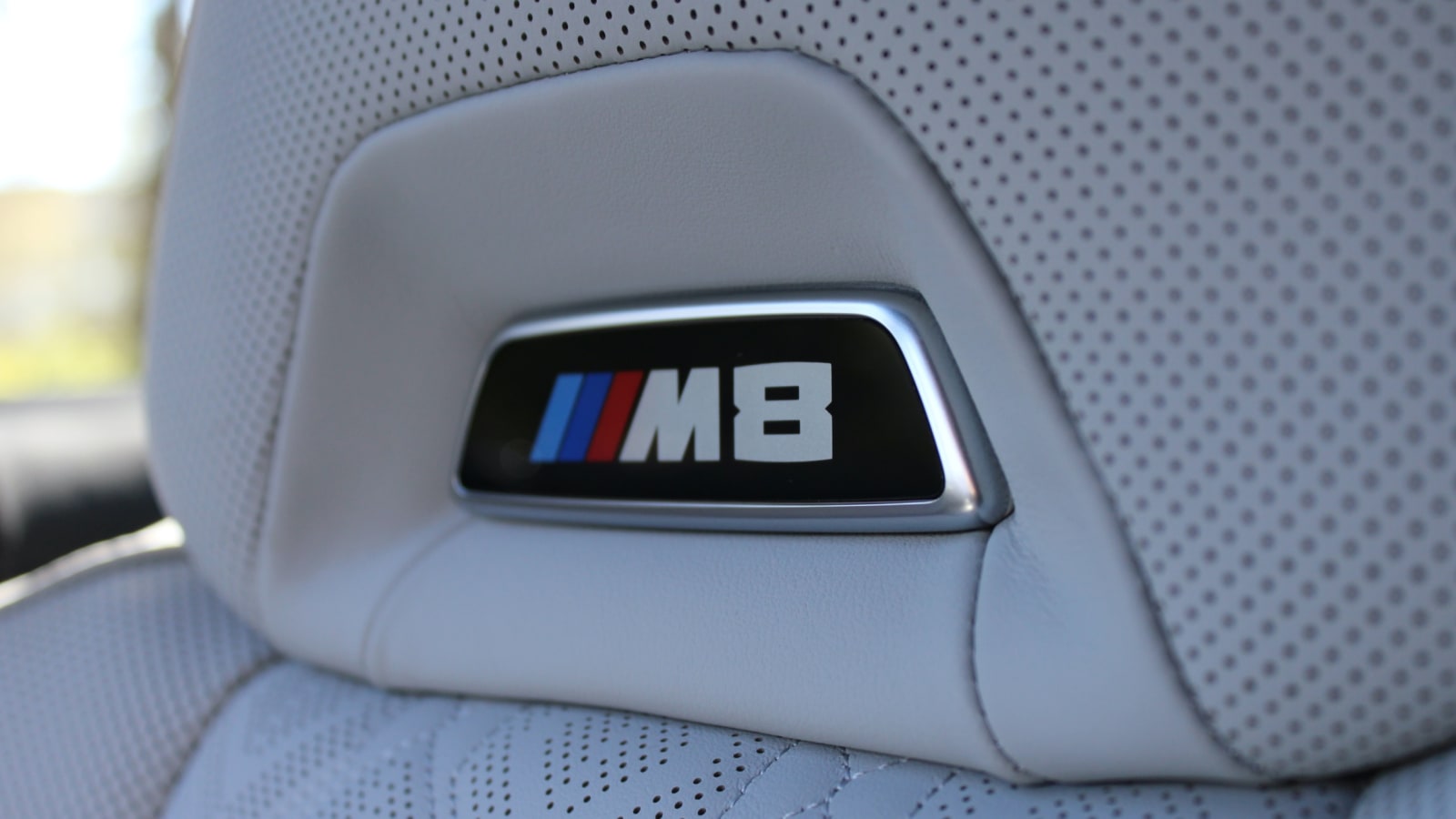 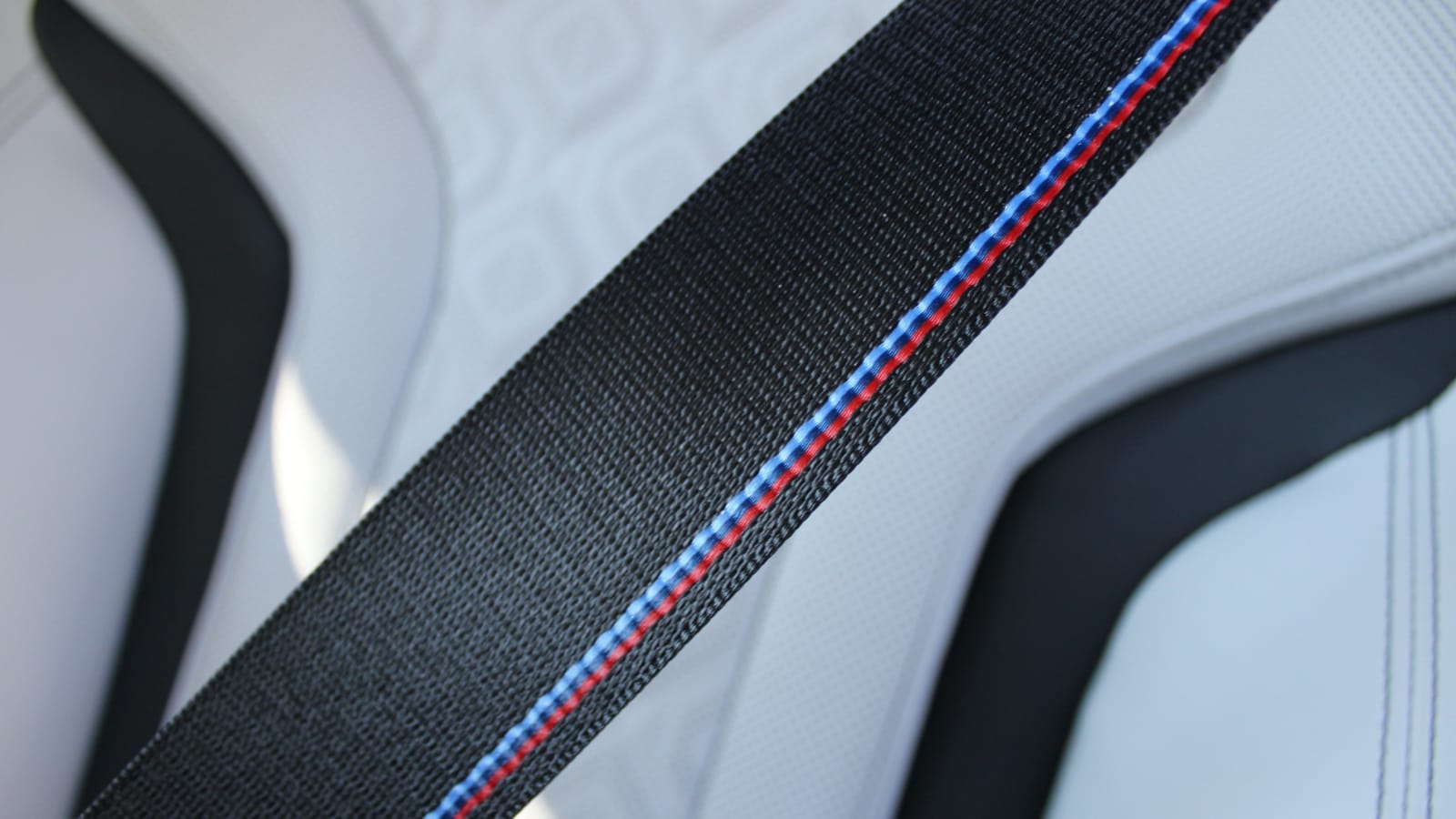 The one challenge the M8 presents is timing your shifts in the eight-speed transmission’s manual mode. As this thing winds up so quickly, you have to be quick on the paddles to hit your swap before bouncing off the car’s 7,200-rpm redline. Get it right, and you’re rewarded with a crisp, quick change and the resultant punch of landing in the heart of the engine’s power band.

Despite the car’s outright aggression, it’s not a punishing daily driver. It feels smooth on the road despite the tiny sidewall on the 20-inch Pirelli P Zero tires. The adaptive suspension is accommodating even on downright shoddy roads. It’s spacious inside, with plenty of creature comforts for the driver and passengers. Even installing car seats in the back is an easy chore, with plenty of room to work and easily accessible LATCH anchors hidden neatly behind little leather flaps. When not absolutely exploding onto a freeway on-ramp, this thing can cruise in luxurious comfort. As speed builds, though, it feels planted and precise, a true super sedan capable of tracing flat arcs down winding roads as surefootedly at 65 mpg as at 35.

I had considerable rain during my time with the M8, and the all-wheel drive came in handy. Despite the soggy roads, the M8 was happy to bite down into the pavement and propel itself forward almost as forcefully as on dry roads. Of course, the massive power was still eager to overcome traction on looser roads, but no surprise there. With great power comes the responsibility to use the right pedal judiciously, as tempting as it is to act like a fool with it. 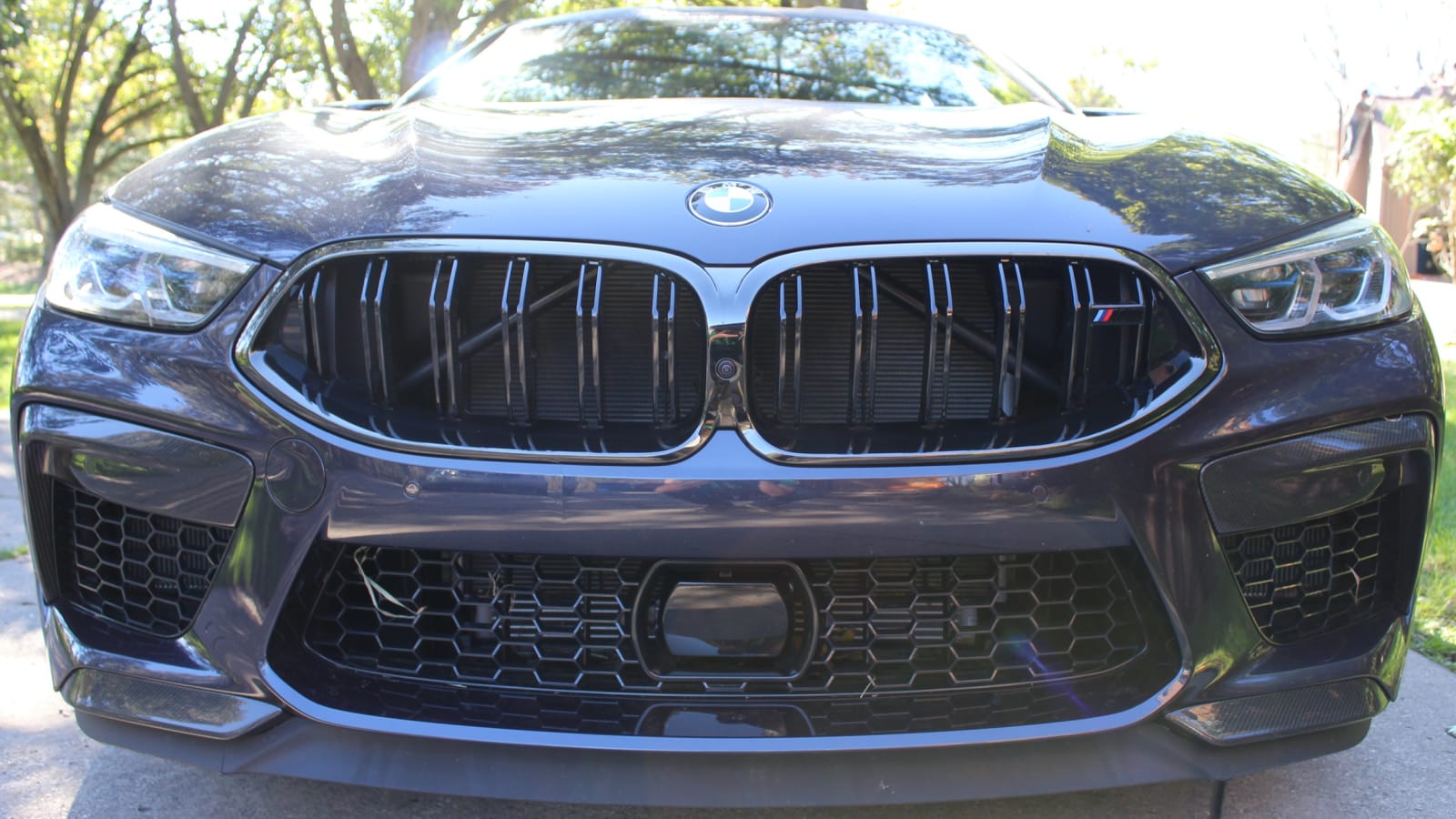 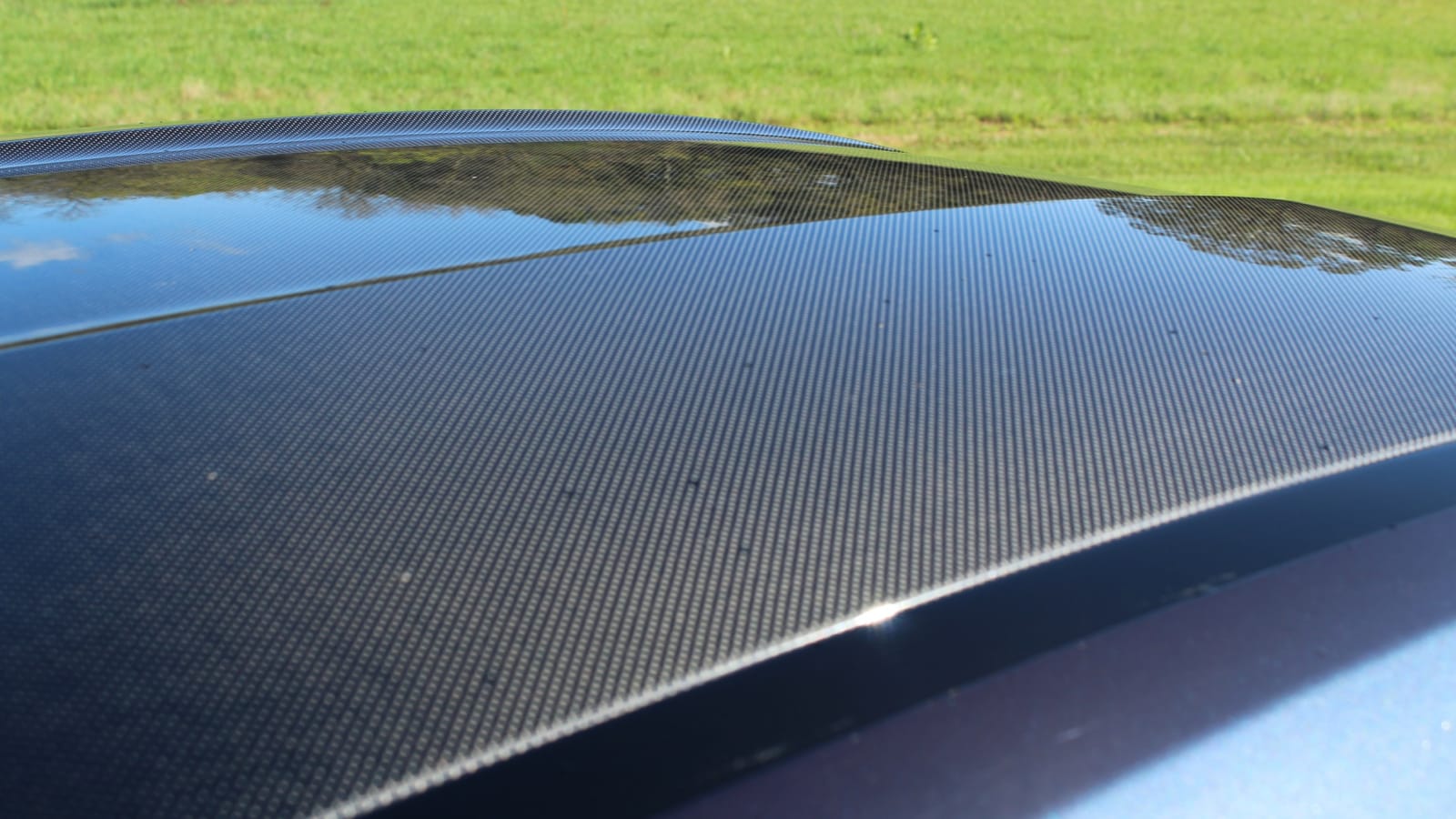 This M8 also came equipped with the Driving Assistance Professional package. This made some of the more boring stretches of highway easier to deal with. Especially given how easily this car will violate the speed limit with the slightest provocation, turning on adaptive cruise control served me well in the radar-patrolled sections of I-96. This is a car to which speed comes easily and stealthily. If you don’t keep an eye on the speedometer, it’s easy to find yourself cruising a good 20 mph faster than you feel like you’re doing.

Prior to testing the M8, I had the Audi RS E-Tron GT, a car with a similar body style and specs — 637 horsepower, 0-60 in 3.1 seconds. Of course, it has a completely different approach to achieving those numbers. The M8 does it with cylinders firing and a lot of fanfare; the E-Tron does it with motors spinning and eerie calm. They even come at a similar price, with this $163,095 gas-guzzling BMW coming in at $1,205 more than the electric Audi.

During my time with the M8, I also couldn’t help but think covetously of Mercedes-AMG’s magnificent boosted inline-six. At this price tag, and with this much power, the cleaner Audi seems just as engaging as the M8, but if I’m looking for a high-performance sedan to usher out the ICE age with a bang (and some crackles), the riotous Mercedes-AMG GT 53 is the more emotional and engaging ride since the engine is a complementary part of the experience rather than a grand-standing scene stealer. That’s just a personal choice, though. Take your pick: a BMW V8, Mercedes mild-hybrid inline-six or Audi’s/Porsche’s stellar e-motor setup. There’s not a bad choice to be made here.