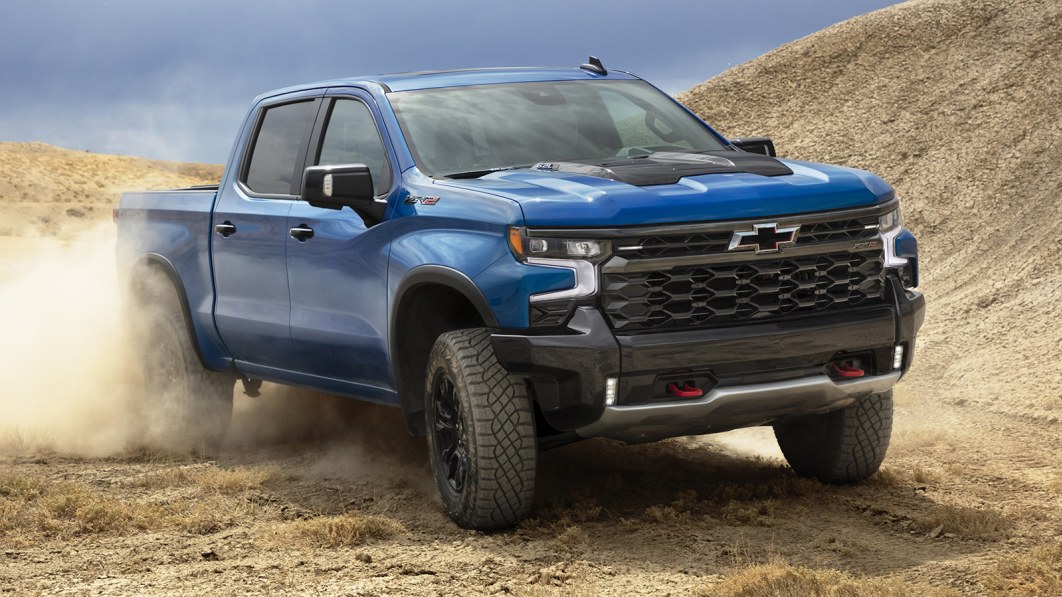 GM Authority says it heard from “sources familiar with the matter” that Chevrolet plans to price the 2022 Silverado ZR2 like the automaker knows what it’s got. Base MSRP is rumored to be pegged at $65,100. Add the $1,695 destination charge to that, and you end up with $66,795 for the most off-road-capable Silverado one can buy from the Chevrolet factory. That sum is a bunch of pretty pennies. First, let’s recap what it buys. The pickup fits Multimatic DSSV spool-valve shocks and matched springs providing two inches of lift compared to a standard Silverado, just like the less expensive Silverado Trail Boss, but with more suspension travel and comfort than the Trail Boss. There are front and rear locking differentials, skid plates, 11.2 inches of ground clearance, 33-inch tires on unique wheels, a Terrain Mode for one-pedal backwoods driving, a front bumper with removable end caps and a shape that provides an excellent approach angle, plus relocated exhaust tips that should stay out of the way of remodeling obstacles on the trail. The only configuration will be a crew cab with the short bed, and a 6.2-liter V8 making 420 horsepower and 460 pound-feet of torque, shifting through a 10-speed automatic.

It’s not exactly a Ford F-150 Raptor competitor, but it’s priced like one. In fact, these numbers make the 2022 Silverado ZR2 cost $995 more than the 2021 Raptor, which starts at $65,840 after destination. We don’t know what kind of standard features Chevy plans to throw at the ZR2, so a like-for-like comparison could alter the math. But we do know the Raptor’s 3.5-liter twin-turbo V6 makes more power than the Chevy, its twin-pipe grumble representing 450 hp and 510 lb-ft of torque.

More intriguing is how much daylight the ZR2’s rumored price puts between it and competitors aimed at the Silverado Trail Boss, the 2021 Ford F-150 Tremor and 2022 Ram Rebel. The Tremor comes with a 3.5-liter twin-turbo V6 doing 400 hp and 500 lb-ft, trailing the ZR2’s equipment list by having a couple inches less ground clearance, a locking diff only in the rear and an optional Torsen LSD in front, and a lower tow rating. It starts at $51,200, a substantial $15,595 below the ZR2. The Rebel with the optional 5.7-liter eTorque V8 producing 395 hp and 410 lb-ft  start at $55,090. It matches the ZR2’s 33-inch tire size, but is down on power and numerous other bits, and both it and the Ford lack the ZR2’s trick suspension.

If GMA‘s figures are accurate, it will be interesting to see how the ZR2 fares. Once Chevy revamps its configurator with the new truck, we’ll know the real differences.