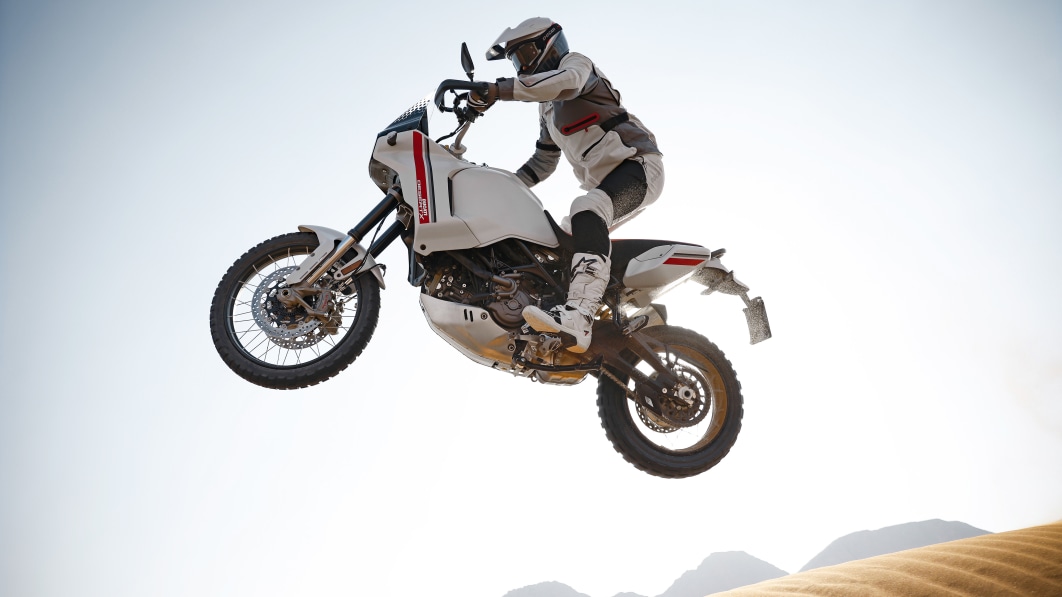 Ducati has kept its promise of bringing the Desert X concept it unveiled in 2019 to production. Now called DesertX, it looks a lot like the heritage-soaked design study introduced two years ago, but it has received several updates that should make it even more fun to ride.

Most of the key elements that defined the well-received concept are accounted for on the regular-production model. Inspired by vintage Ducati-powered Paris-Dakar racers and 1980s enduro motorcycles, the DesertX wears white fairing with red, gray, and black accents. It also stands out with a futuristic-looking interpretation of the twin round headlights seen on the Cagiva Elefant that took first place in the 1990 edition of the Paris-Dakar, and it rides on a 21-inch front and an 18-inch rear wheels. Both are wrapped by Pirelli Scorpion Rally STR tires.

Bigger changes are found on the specifications sheet. While the concept was mechanically related to the Scrambler 1100, the final version is powered by a 937-cubic-centimeter two-cylinder engine tuned to develop 110 horsepower at 9,250 rpm and 68 pound-feet of torque at 6,500 rpm. The twin is an evolution of the water-cooled Testastretta engine that powers the Multistrada V2, among other models, and it’s connected to a six-speed transmission whose bottom five gear ratios were made shorter for better acceleration on loose surfaces. First and second were made significantly shorter; however, sixth was left long to ensure the DesertX remains well-suited to long highway trips.

Ducati is primarily known for road- and track-focused bikes, but it has more than enough experience to develop an off-road-ready suspension system. Up front, the 445-pound DesertX features a Kayaba fork with about nine inches of travel; out back the aluminum swingarm provides around 8.6 inches of travel. Factor in the nearly 10 inches of ground clearance and the DesertX sounds extremely capable off the pavement.

It should be equally at home on the pavement. The riding positions for rider and passenger were set for comfort, it can be fitted with a variety of bags and cases that provide about four cubic feet of storage space, and adventurers who need more range than the standard 5.5-gallon fuel tank offers can order a second tank with a two-gallon capacity at an extra cost. It’s mounted near the back of the bike, and hitting a switch on the dashboard is all it takes to switch. Riding range hasn’t been released yet.

Ducati dealers across the United States will begin receiving the 2022 DesertX in June 2022. Pricing starts at $16,795.