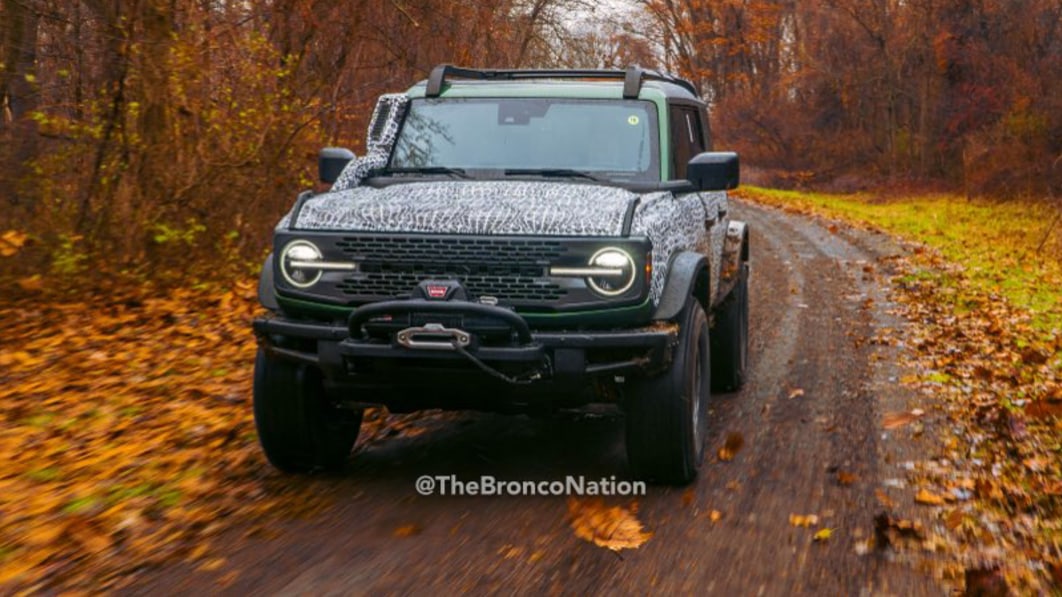 Ford teased the 2022 Bronco Everglades again Friday with photos of its prototype wearing a little less camo than we’ve seen previously. These pics from Bronco Nation actually go so far as to show a bit of the Bronco’s paint finish. Scandalous, in an Edwardian sort of way.

Without the billowing vinyl roof disguise and some of the flush bits removed, the Everglades is starting to look like a for-real Bronco, which is fitting. The Everglades is expected to bow next summer alongside the new Bronco Raptor, which Ford conveniently teased earlier this month.

The company confirmed in October that the winch-adorned prototype was indeed headed to production and would be marketed as the “Everglades,” confirming what curious fans discovered in Ford’s ordering system in September. Its interior was listed as being marine-grade, which likely means heavy-duty vinyl. The ordering system listed Area 51, Cactus Gray, Shadow Black, the recently added Eruption Green (shown here) and an as-yet-unannounced color named Desert Sand.

We’re hoping the Everglades will get more of these flashy color options, but gator-skin green is certainly a good start. The snorkel, winch and bumper (which was engineered to work with the Bronco’s factory safety systems even with the winch installed) are known to be included with Everglades, but full details and pricing are not expected until Q1 of 2022 when the package officially debuts.