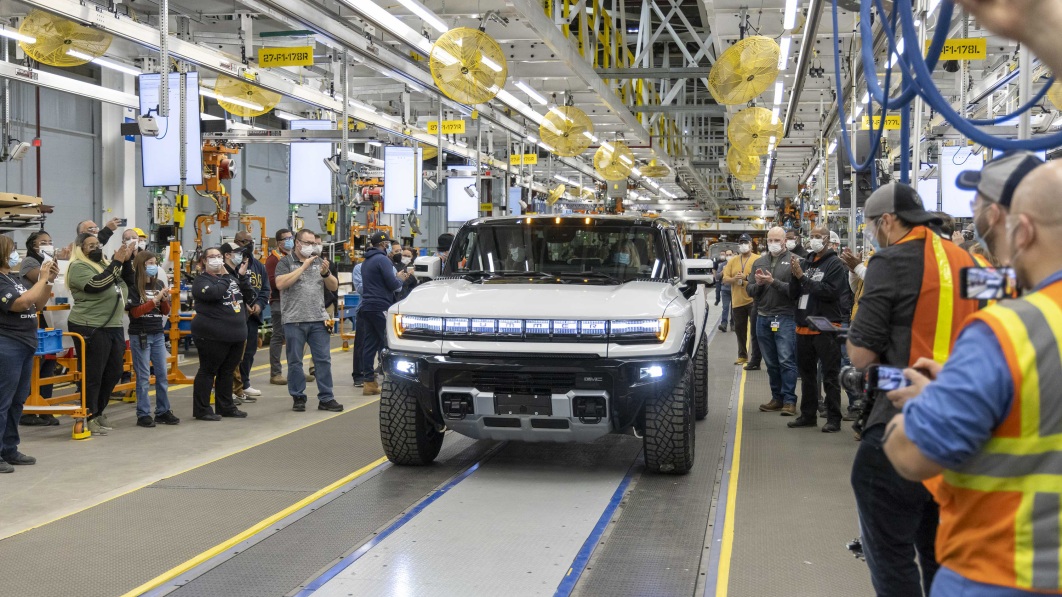 It’s official: Two years after GM announced the electric GMC Hummer pickup, the first couple dozen units have left the line at the GM Factory Zero Detroit-Hamtramck Assembly Center, according to GM president Mark Reuss. In an interview with CNBC to celebrate the milestone, Reuss said 17 Hummer EVs are ready for delivery to customers. This makes the Hummer the first of GM’s new Ultium-based EVs to leave the factory, and the second electric pickup on the market after the Rivian R1T.

The first 1,200 Hummer EVs made will be Edition 1 models, all of which are Interstellar White outside with Lunar Horizon interiors and bronze badging. Each of the $112,595 pickups is powered by three Ultium motors producing a GM-estimated 1,000 horsepower and 11,500 pound-feet of torque, loaded with features like height-adjusting adaptive suspension, skid rails and rock sliders, 35-inch tires, the diagonal-driving CrabWalk, the launch control system Watts to Freedom that unlocks a three-second sprint to 60 miles per hour, and Super Cruise. Range is a GM-estimated 329 miles when the 200-kWh battery is fully charged.

As these filter out to eager owners, GM is prepping the next four phases of the Hummer rollout. About a year from now, in autumn of 2022, Factory Zero will begin production of the first widely available Hummer, the EV3X pickup that starts at $99,995 before destination. Three Ultium motors will provide an estimated 800 horsepower and 9,500 pound-feet of torque to a range estimated beyond 300 miles. Spring of 2023 is expected to deliver the Hummer EV2X pickup at an MSRP of $89,995, utilizing two motors producing a total 625 hp and 7,400 lb-ft over a range also estimated to go beyond 300 miles. Around the same time, the first units of the $105,595 Hummer SUV Edition 1 are planned to head down lines at Factory Zero. Finally, in the spring of 2024, the entry-level $79,995 Hummer EV2 pickup and its two-motor powertrain should arrive, making the same output as the EV2X, but only good for a range of around 250 miles.

That won’t be all we see from Factory Zero, either. GM invested $2.2 billion in the Detroit-Hamtramck plant that once built bread-and-butter GM fare like the Chevrolet Impala, Buick LaCrosse, and Oldsmobile Toronado in order to turn the facility into its first EV base of manufacturing operations for Ultium products. The battery-electric Chevrolet Silverado and GMC Sierra pickups will be built there, as will the Cruise Origin robotaxi.