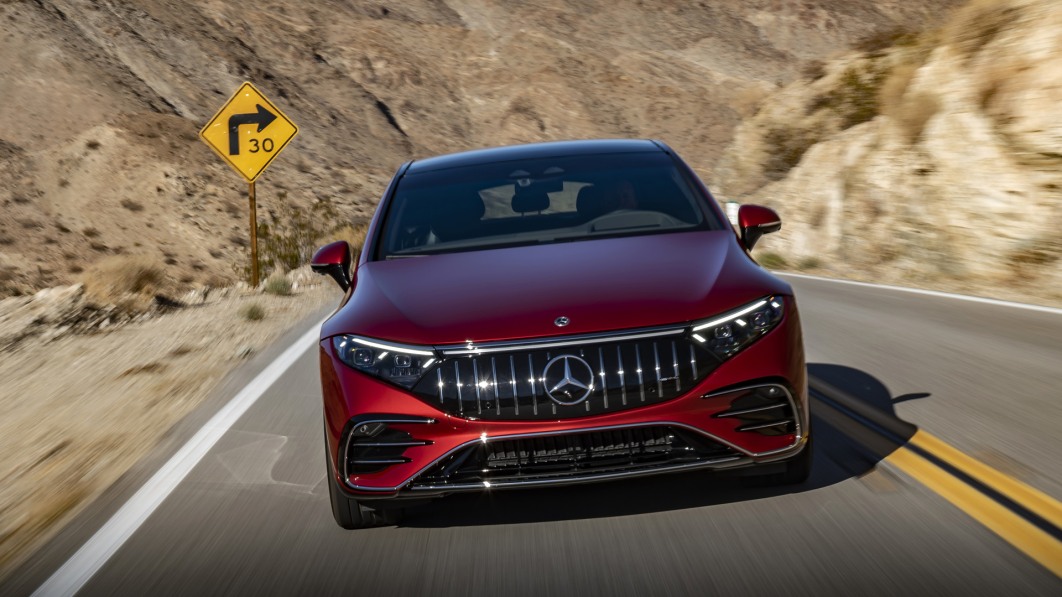 PALM SPRINGS, Calif. — What makes an AMG? To many, it’s a badge glued to their gold C300. That’s extremely incorrect. To most, it’s vicious acceleration punctuated by a snarling, angry exhaust note. It’s all a bit naughty and a touch nasty, like turning a refined lady into (avoiding sexist metaphor). So the question is, how do you make an electric sedan that’s quieter than a whisper and already packing 516 horsepower and a 4.1-second 0-60 time more rapid, more vicious and in any way snarling? That’s effectively the task of the 2022 Mercedes-AMG EQS, the first electric car tackled by Mercedes‘ former in-house tuning firm and current sub-brand, AMG.

For the rapid bit, there are AMG-specific electric motors at the front and rear axles. If you’re used to reading and/or understanding internal combustion engines, get ready for some new learnings. According to AMG, there are “new windings, stronger currents and new actuation via inverters with specially designed software (that) allows higher rotational speeds and thus more power.” The rear motor is particularly powerful thanks to a “six-phase design based on two windings with three phases each. The stators with move-in winding ensure a particularly powerful magnetic field.” There was also much greater cooling capacity added, a requirement for the sustained higher speeds expected of an AMG, by way of a “water lance in the shaft of the rotor” and AMG-specific elements like “special ribs on the stator and the needle-shaped pin-fin structure on the invertor, which is made of high-performance ceramics.”

If at this point you haven’t gone cross-eyed, congratulations. Either way, the end result is 649 hp and 700 pound-feet of torque, plus a boost function that briefly increases output to 751 hp and 752 lb-ft when using the Race Start function included with the AMG Dynamic Plus package that comes standard on the American-market AMG EQS. With it engaged, the 0-60 time falls to 3.4 seconds. That’s basically the same as the Porsche Taycan GTS. 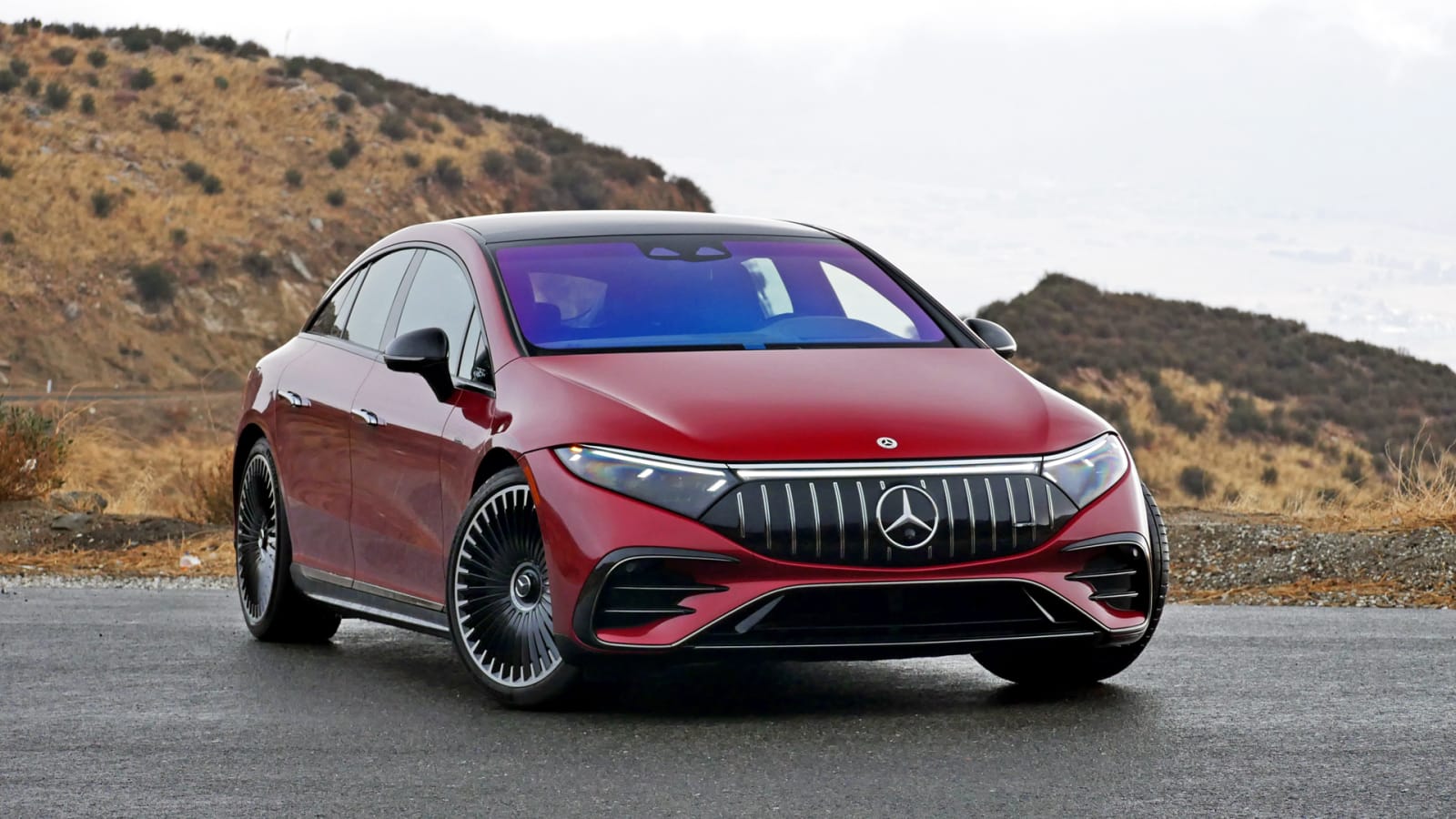 Its acceleration can certainly be described as rapid, and the way it snaps you into the more encapsulating AMG front seats is indeed vicious. But, can you really tell the half-second difference between EQS 580 and AMG EQS? Unfortunately, a 580 wasn’t on hand to offer that point of comparison, and it’s been two months since I drove one. It didn’t seem that different, which would jibe with such 0-60 differences of internal combustion cars. We’re talking degrees of breathtaking here. Really, the biggest difference seems to be the increased cooling capacity when you’re really pushing it on a mountain road, track or the Autobahn.

Ah, but what to do about the noise? While the regular EQS provides a menu of artificial noise “sound scapes,” keeping them off seemed appropriate in a car for which “quiet” is a defining characteristic. On the other hand, a quiet AMG is an oxymoron. Even AMG seems to agree, as its press materials and presentations effectively lead off with describing the “AMG Sound Experience” created for the EQS. It features a “new, powerfully sonorous sound” created using additional speakers and other hardware that matches the “tonality and intensity” of the selected drive mode or preference of the driver.

Our preference was to immediately turn it off. Not because this EQS is still better for being silent, but because the noise is terrible. The louder of the two, “Performance,” loudly emanates from all around you, like you’ve beamed into the warp core of the starship Enterprise. It gets louder as you lay into the throttle, but even while cruising, it’s this deep, electronic, overly sci-fi ambient noise that draws way too much attention to itself. Going from on to off is stunning, like turning on your noise-cancelling headphones mid-flight. And the noise isn’t just artificial in its creation; it’s artificial in its sound and placement. By contrast, the Porsche Taycan’s piped-in noises sound like they’re coming from roughly where the rear motor is and are literally based on recordings from that motor in action. The other EQS setting, which is inaccurately named “Authentic,” is quieter but still suffers from so obviously coming from the car’s sound system. Thankfully, if there was ever a key element of the driving experience that could be easily corrected by an OTA update, it’s the fake Jetsons noise machine. 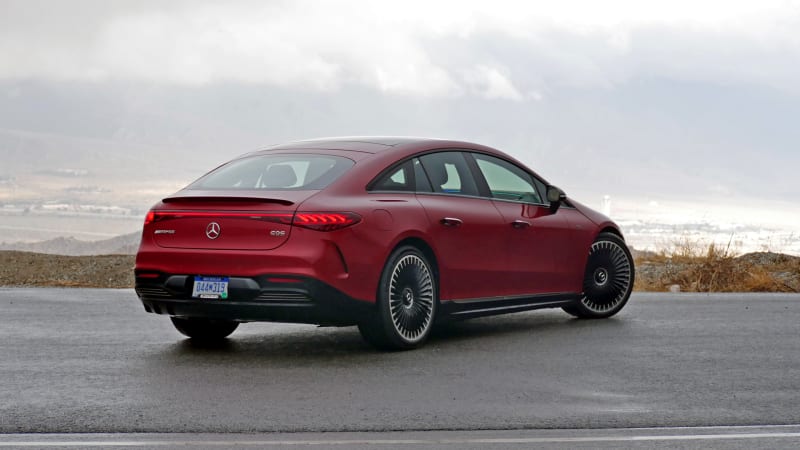 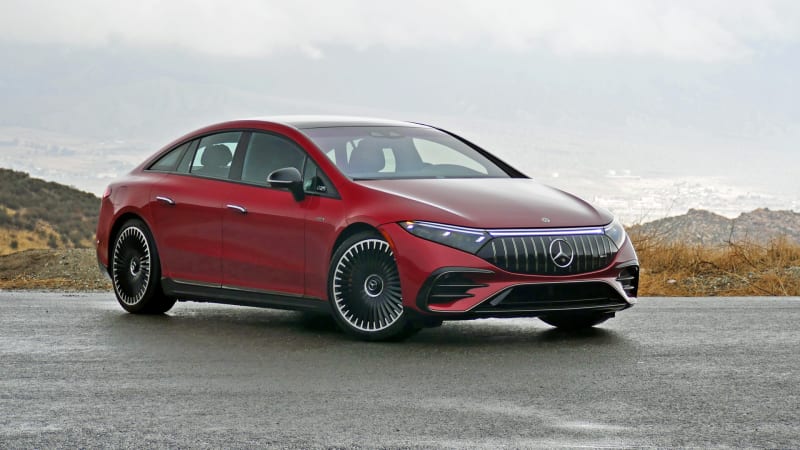 Rapid acceleration and silly noises are only part of the modern AMG experience, of course. While the regular EQS wafts along with a pillow-soft ride that isolates you from impacts like few other cars, the AMG EQS has a more direct, connected feeling that lets you feel more of the road while still saving you from its most unpleasant topographical features. Selecting Sport Plus mode will even have it bobbing and jostling as other such max-attack settings do.

Both the regular and AMG EQS models share a common suspension design, with a four-link front, multi-link rear, air springs and adaptive, electronically controlled damping. The componentry is unique to the AMG, however, including a different rear axle beam, subframe and motor mountings, transverse stabilizers and control arms. The air suspension also uses two pressure relief valves, as on the AMG GT 4-Door Coupe, allowing for a greater differentiation in rebound and compression travel. In other words, it can be even firmer for handling purposes without abandoning ride comfort.

We’d love to say how much of a difference it all made, but road conditions were not on our side. A thick blanket of fog dampened the road and limited visibility on the assigned drive route of California Highway 243 that ascends from the desert up beyond 6,000 feet toward Mount San Jacinto and Idyllwild, Calif. We can at least report that the more connected overall feel means it doesn’t provide the same sense of cognitive dissonance, whereby it’s shocking that the car that was just wafting along a second ago can suddenly whip itself around corners with stunning agility rather than heave-ho-ing to starboard. The AMG EQS gets the same various bag of tricks, including standard rear-wheel steering (it moves up to 9 degrees versus 10 due to bigger wheels), variable all-wheel drive, low center of gravity and anti-roll efforts of the adaptive air suspension, but thanks to its suspension upgrades, that stunning agility feels cohesive with the car’s general demeanor. 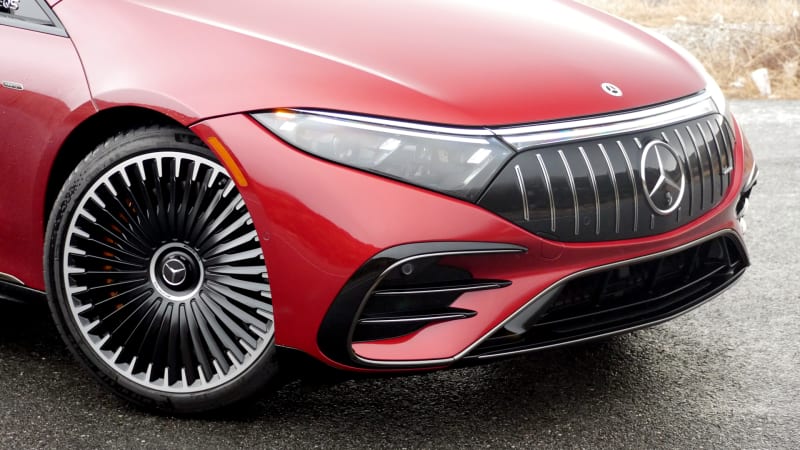 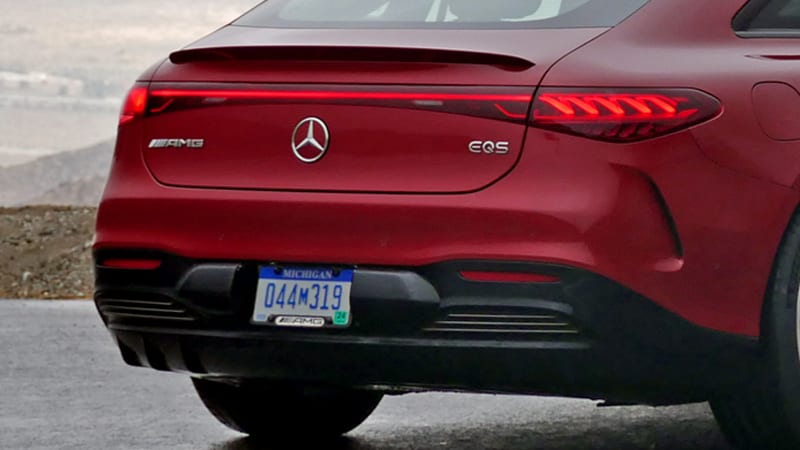 The brakes get an upgrade to AMG’s high-performance compound brake system that has six-piston calipers up front and single-piston rears (as in other EVs, the regenerative braking system reduces the size requirements at the rear). You can also outfit AMG ceramic high-performance brakes that increase in size and heat resistance, but even if we couldn’t push the AMG EQS to its fullest up in the mountains, we’re pretty sure you’d never really want to push it so hard in a way that would require ceramic brakes. It’s not a Taycan, and that’s OK.

Visually, the AMG EQS is most easily identified by the vertical chrome slats in its gloss black frontal shield that mimic those of the Panamerica grille found on other AMGs. There were also changes made to the car’s aerodynamics for improved high-speed stability, including a front splitter and decklid spoiler, which do increase the drag coefficient to 0.23 up from an industry-best 0.20. This, along with the greater motor output, will undoubtedly further reduce the estimated range of the 107.8-kilowatt-hour battery shared by every EQS. While the base EQS 450+ is estimated at 350 miles, those for the EQS 580 4Matic and AMG EQS have yet to be announced. 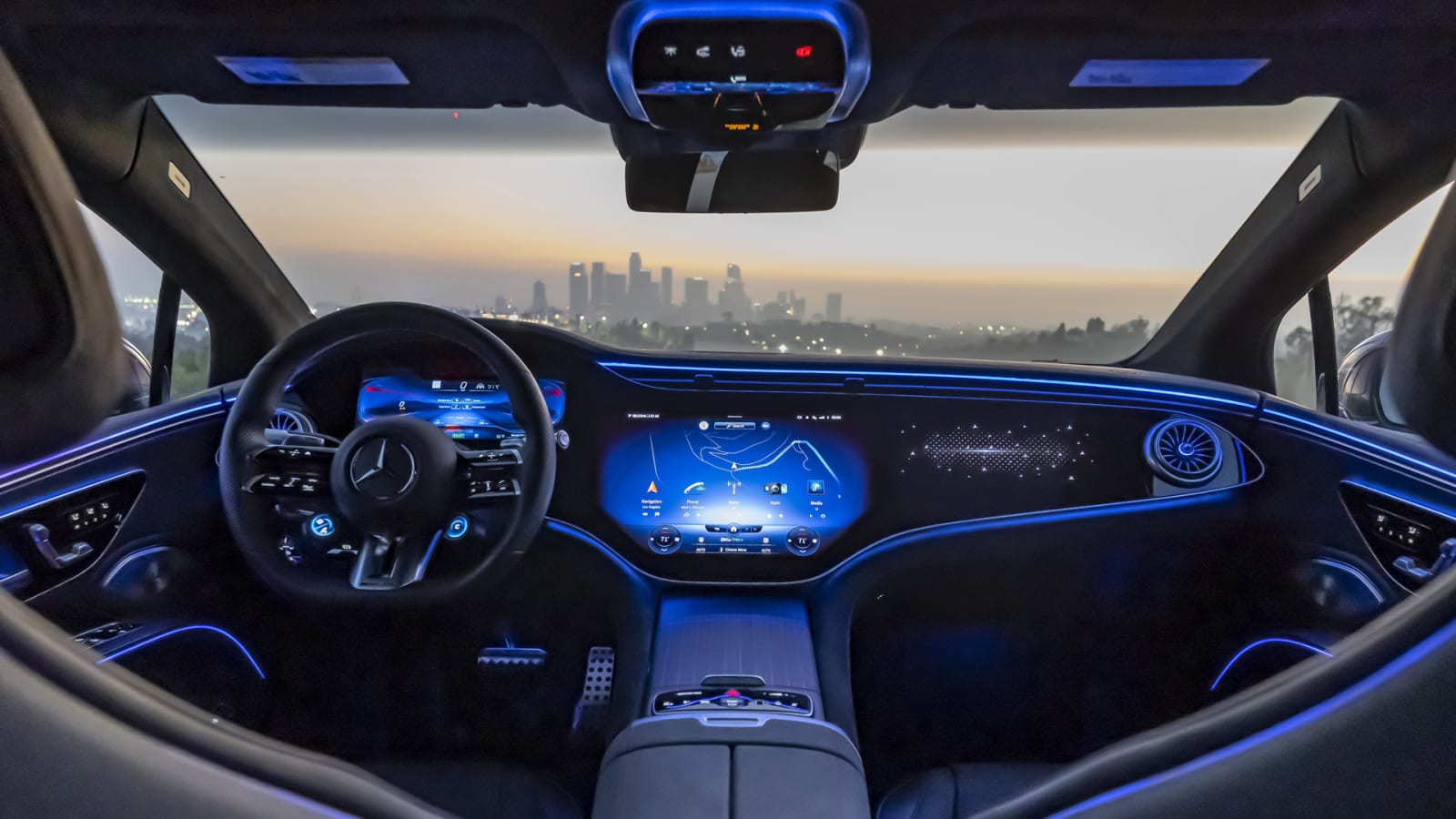 The interior gets standard MB-Tex simulated leather upholstery (real leather is optional) with red stitching and microfiber inserts that match the surfaces of the dash’s lower surfaces. Its upper surface, plus those of the doors, gets a unique space grey MB-Tex with a special surfacing known as “Neotex.” Of course, it’s hard to notice anything when the standard Hyperscreen and its three giant displays are shining at you (not to mention the Tron ambient light show). They’re basically the same as the one offered in the regular EQS, but the instrument panel screen receives unique AMG-specific gauge designs. Mercedes’ new augmented reality head-up display is standard.

Pricing will not be announced until closer to its on-sale date early next year, and it’s hard to know how much of a premium the AMG will command. We’re guessing its closer to the $10,000 bump you see between various 450 and AMG 53 Mercedes models as opposed to the giant $42,000 chasm that separated the old S 560 and S 63 Coupes. That would put the Mercedes-AMG EQS in the $130,000 ballpark, or about the same as the Porsche Taycan GTS. That seems appropriate as its degree of comfort, space and opulence is balanced by the Porsche’s far superior dynamic talents. What about the Tesla Model S Plaid? It too starts in that ballpark, and although Tesla pricing seems to change like the weather, its performance advantage and assumed superior range is countered by Mercedes’ overall quality and chassis wizardry. In other words, if it’s indeed $130,000, that seems OK.

Ultimately, though, the real bogey is the EQS 580 and whether the AMG EQS really is that much better, or rather, a more serious performance machine. It just doesn’t seem to be. The more connected driving feel is nice, but the regular car is still shockingly capable around corners. No one will ever complain about more power, but the gains are a matter of piling excess upon excess. And let’s not bring up the noise again. It just seems like an electric AMG should push the envelope further.