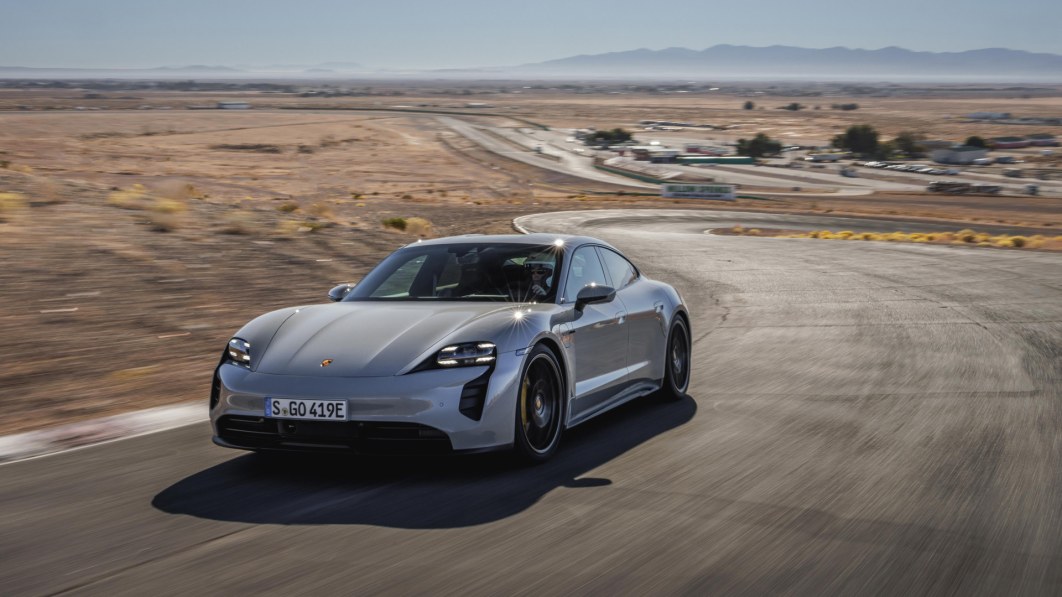 ROSAMOND, Calif. – Talking about electric cars inevitably comes down to charge times, range, kilowatts this and volts that. Even the lone performance-oriented element that gets frequently mentioned, the 0-60 time, is itself just a number. It’s all so very geeky. Much as the common sports fan doesn’t fall in love with the game because of advanced analytics, it’s not surprising that the common car fan hasn’t exactly been falling head over heels for electric cars. For them, it’s about the feels, the looks and the emotion, not the numbers.

The 2022 Porsche Taycan GTS is not for the geek squad. Its EPA-estimated range, when eventually announced, should be little better than the Taycan Turbo’s rather meh 212-mile estimate. Its 0-60 time of 3.5 seconds, whether put up by the sedan tested here or the Sport Turismo wagon we’ll be reviewing away from the track in two weeks, is slower than the Lucid Air Grand Touring and Tesla Model S Plaid. Its impressive 800-volt battery architecture does allow you to recharge from 5% to 80% in 22.5 minutes, but again, check your pocket protector Sheldon.

Nope, all those facts and figures immediately drain away as the Taycan GTS slingshots out of pit lane at Willow Springs International Raceway, effortlessly getting up 70 mph or so after its unique gear change at around 55. After the third turn, any thought about this car’s means of propulsion is even out the window as the attention turns instead to just driving as quickly and as smoothly as possible around the circuit. Basically, you forget it’s an electric car and instead revel in it being a Porsche. And as this is the new GTS, it is the most performance-focused version of this particular Porsche yet. 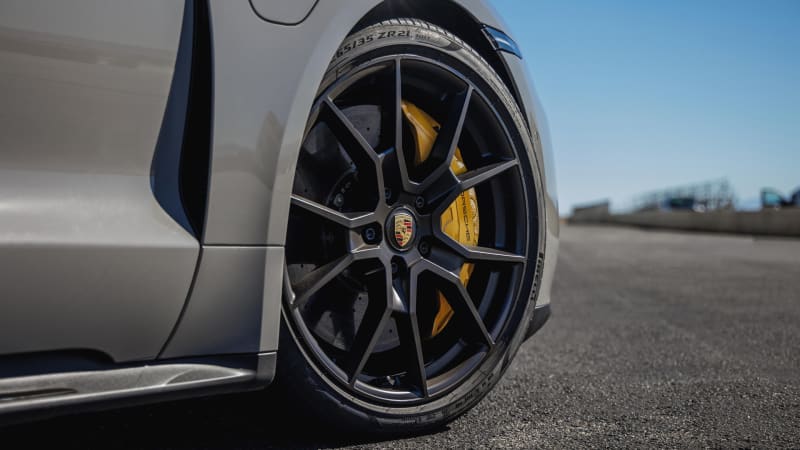 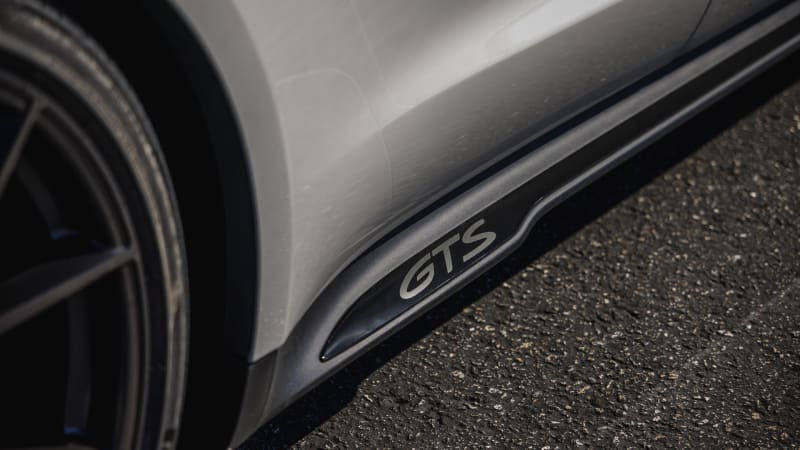 Although the suspension componentry, including air springs and dampers, carry over from the Taycan 4S, the calibration and tuning are unique to the GTS. Porsche says it results in improved response and a greater sense of connection to the road, but as there wasn’t a different version on hand, we can only say that the GTS stayed wondrously flat and composed around the veritable rollercoaster that is Big Willow. There is astonishing grip provided by the Pirelli PZeroes, the front and rear motors providing all-wheel-drive traction, and the inherently low center of gravity courtesy of all those batteries.

The steering is feelsome and immediate with a tight, eager turn-in enhanced by the standard brake-based Torque Vectoring Plus system and available rear-wheel steering system that rotates the back wheels by as much as 7 degrees (the norm is 5 degrees). The latter would probably be better appreciated on a tighter, more technical circuit, but there’s no denying the agility this long and heavy car exhibits. It’s tremendously balanced too, more 718 than 911, with its batteries spread between the axles and motors whirring front and rear. There’s not a hint of understeer, and although the rear did kick out at one point with the stability control reins loosened, that was more the result of track conditions and driver error. Like the mid-engined 718 Cayman GTS or GT4, this is a car about neutral precision, not histrionics. Can you drift? As with some other high-performance, all-wheel-drive vehicles, it’s indeed possible, and the rear-wheel steering response is even programmed to slow in such instances, but that’s really not its M.O. 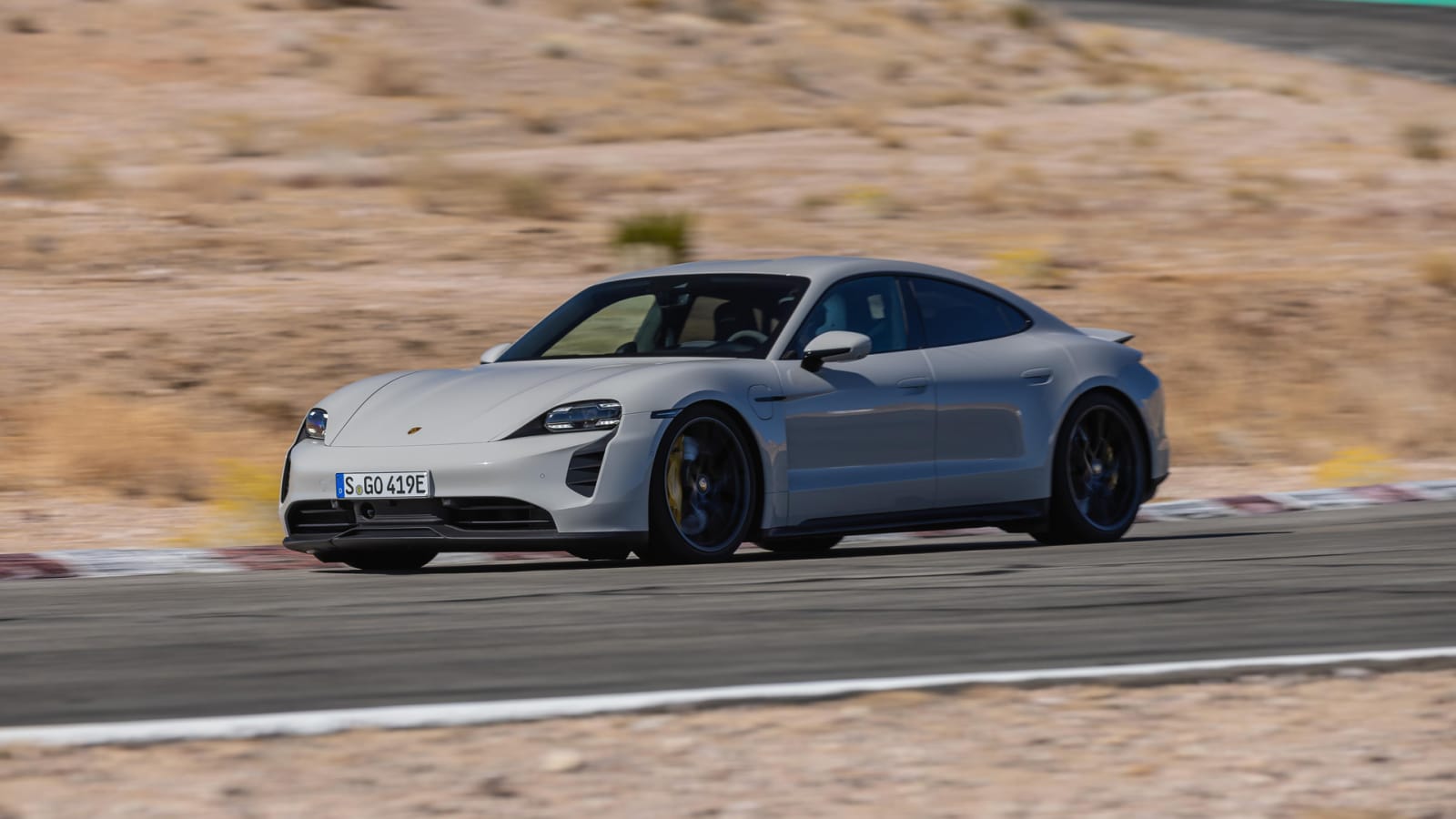 It certainly wasn’t the point as I continued to attack Big Willow, lap times consistently lowering as familiarity with track and car increased. Importantly, throughout the endeavor, the Taycan GTS never felt out of place as some high-performance sedans can with that little voice in the back of your head pondering, “this is all well and good, but is anyone really going to do this?” With the Taycan GTS, maybe they won’t, but they’ll be missing out on the maximum, numbers-be-damned experience. I’ve had the good fortune of driving the 718 Cayman GT4 at Knockhill in Scotland and the last-generation GT3 RS at Road Atlanta, and although this was certainly a quieter experience, the Taycan GTS felt similarly at home turning lap after lap.

Quieter yes, but not completely mute. Putting the Taycan in Sport Plus mode automatically engages the “Porsche Electric Sport Sound” function that is tweaked for the GTS. As in other Taycans, the artificial noise was created by recording and digitally futzing with the actual whir of the rear motor, but the GTS gets a louder, bassier version that’s more in keeping with a high-performance application. The rumbling electric whir that seems to emanate from somewhere behind you (just like a proper Porsche’s engine noise should) absolutely adds to the drama and engagement, and I actually switched it on throughout my street drive of the Taycan Sport Turismo regardless of drive mode. It was also helpful on track, adding some useful extra context in regards to speed and throttle position.

Other GTS performance enhancements include the enormous brakes, up to a Turbo-matching 390 mm up front from the 4S’ 360.  They can be upgraded to the Ceramic Composite Brakes as fitted to our car, which are not only lighter and less susceptible to fade, but grow in size by 30 mm and gain four extra pistons for a total of 10(!) in each front caliper, and grow 58 mm at the rear. Besides their sheer girth, you can ID them by their yellow paint versus the standard red calipers (oh, and the $9,080 that gets removed from your bank account). Our car had the yellow ones and they were utterly flawless, with a firm, reassuring and easily modulated pedal feel with no semblance of regenerative-related weirdness. The Taycan does add some extra regenerative braking when in Sport and Sport Plus mode, but the result is more akin to the sort of off-throttle slowing expected of an internal combustion car and transmission. The Normal driving mode feels more like a coast when you lift off the throttle. Our test cars also included the optional 21-inch RS Spyder wheels, in the GTS-exclusive satin black finish, which shave off a total of 11 pounds from the base wheels and are the lightest available on a Taycan. 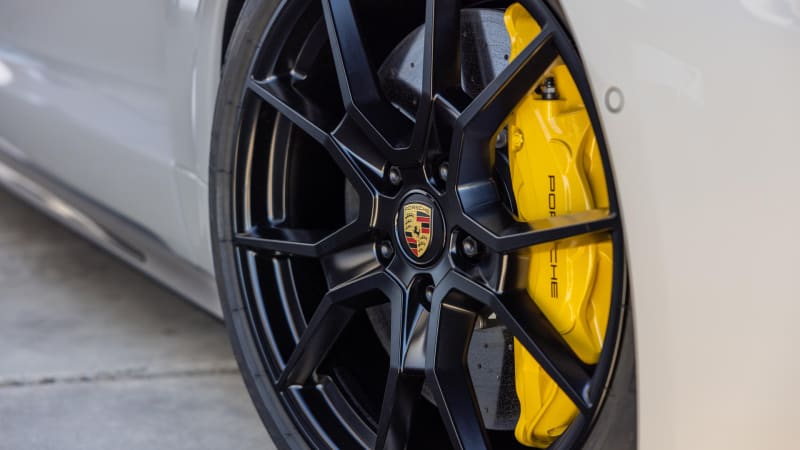 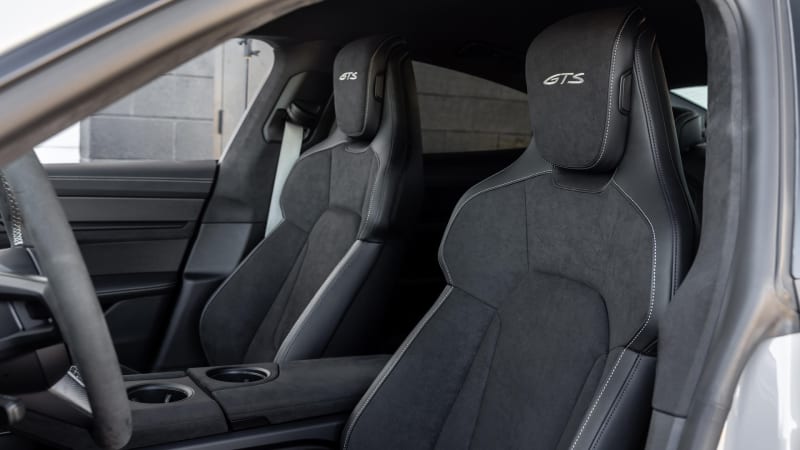 Of course, there’s also the motors. While the one up front is shared with the 4S, the rear is upgraded to the Turbo unit for a grand total of 590 horsepower. That’s right in the middle of its respective motor-donating siblings, and results in that 0-60 time of 3.5 seconds that’s similarly in between (3.8 seconds for 4S and 3.0 for the Turbo). The GTS sedan starting price of $132,750 splits the difference between them, too. The 93.4-kWh Performance Battery Pack Plus with its 800-volt architecture is shared with the Turbo and Turbo S, and as we alluded to, can be usefully topped up in the time it takes to a watch a sitcom. Not exactly a gas tank’s splash and go, but damned rapid for an EV nevertheless.

Visually, the Taycan gets the same hefty diet of black exterior trim as other GTS models, plus the Sport Design body kit optional on other Taycans that adds a unique front fascia, side skirts and rear diffuser. They’re all in black, too. The interior gets slathered in black Race-Tex suede-like cloth. We’ll touch on it more in our road drive of the Sport Turismo, but it honestly looks a bit cheap. At least the 18-way power front seats that Race-Tex covers, with their power-adjustable bolsters and thigh support proved to be sufficient for track use. Are they the fixed-rake carbon buckets of a GT3? No, but then this is still a GTS, and should still be livable on road.

For that part of the story, you will have to wait until Porsche’s embargo for the Sport Turismo and therefore on-road driving impressions lifts on December 14. For now, we can happily report that the Taycan GTS sedan defies the geeky electric stereotype by absolutely dripping cool in the most old-school automotive way possible: on the track. It’s further proof that the electric future doesn’t need to be boring, soulless and best appreciated on a spreadsheet.