SUVs come in all sorts of shapes and sizes, including those that seriously strain the definition of “SUV” or even “crossover.” The 2022 Subaru Crosstrek is really just an Impreza hatchback with a serious lift, rugged roof rails, body cladding and the option of a burlier 2.5-liter engine. That it competes so well against a growing segment of small SUVs designed from the ground up to be SUVs speaks to this little Subaru’s well-rounded design that caters to the outdoor adventure seekers that tend to buy them.

The Crosstrek is simple, versatile and capable regardless of how much of an SUV it is or isn’t. Its back seat and cargo area are bigger than those of most subcompact SUVs, and basically match those of larger midcompact models. It has way more ground clearance and off-road capability than models from either segment (OK, maybe not the Ford Bronco Sport or the Jeep Trailhawks), and its capable all-wheel drive system is standard. It’s also sturdily built with simple controls, and although its handling is bit ponderous, it counters with a comfy ride. This is a vehicle that knows what it needs to do and does it well.

After many noteworthy updates and upgrades last year, the Crosstrek is unchanged for 2022. It arrives in dealers early in 2022. 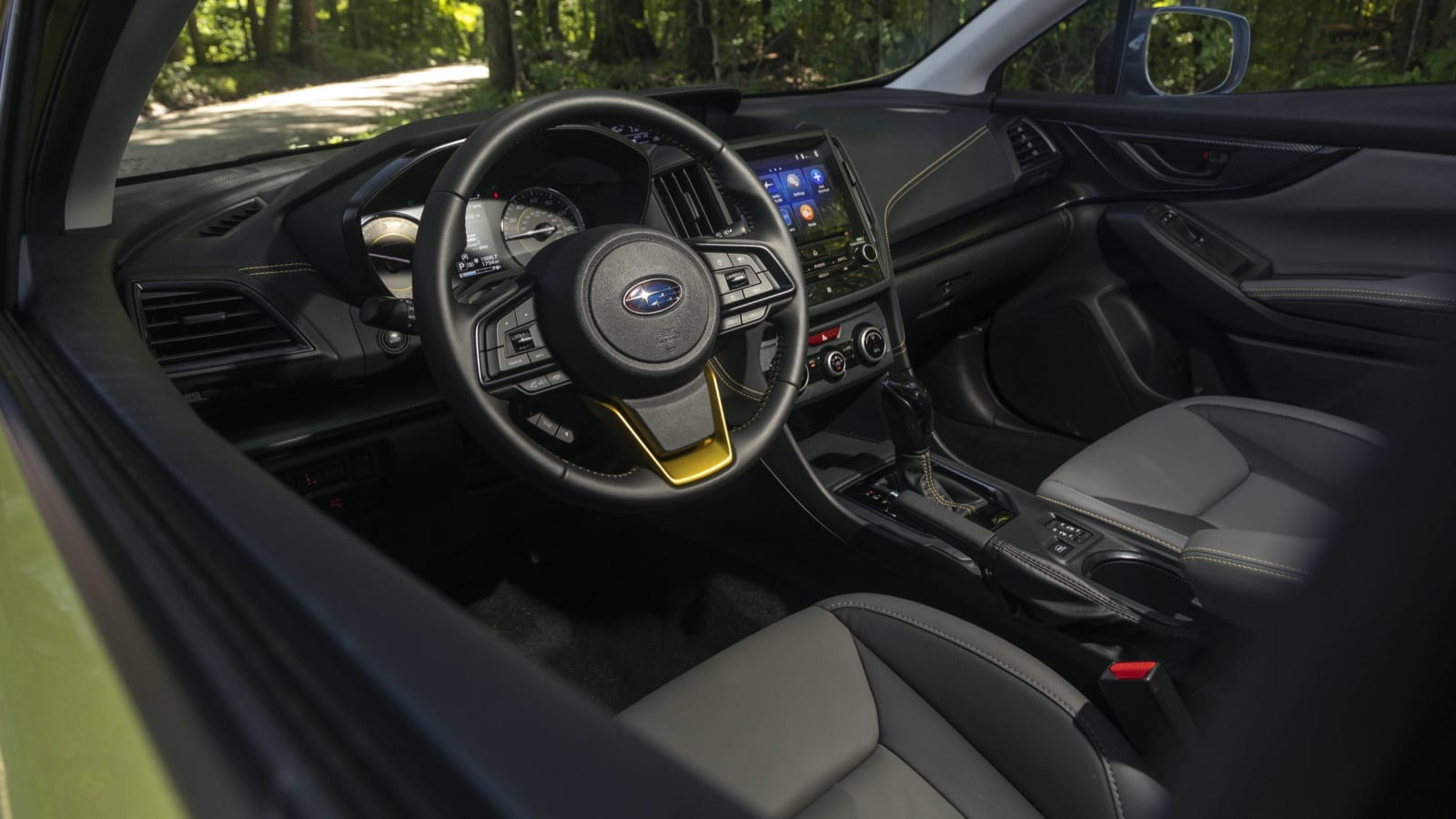 What are the Crosstrek interior and in-car technology like?

The interior is comfortable and feels light and airy due to its upright pillars and plenty of glass. It’s not particularly exciting to look at, but the plastics are all high quality pieces and upper-trim models get two-tone seats and, depending on trim level, yellow or orange accents. Those do a good job of keeping the interior from feeling like an all-black sea of sameness.

There are buttons and dials for the radio and climate controls, which we appreciate. A 6.5-inch touchscreen comes standard; an 8-inch is available on the Sport and Limited (pictured below left). Both are refreshingly simple, painless to use and feature large icons. Apple CarPlay and Android Auto are included.

The main tech annoyance is that various vehicle functions are displayed and controlled through the touchscreen, an instrument panel display and Subaru’s distinctive dash top display (below right). The latter two displays are operated using buttons on the steering wheel. It’s always confusing to know which of the three possibilities controls what, especially driver assistance functions … or whether it’s just a stand-alone button. 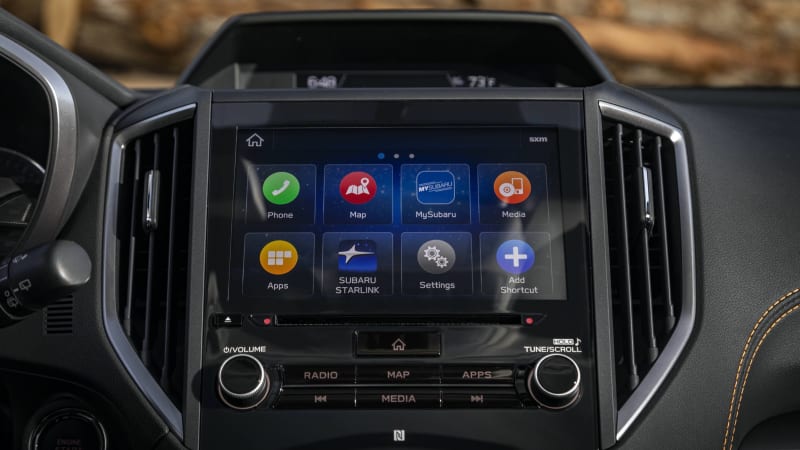 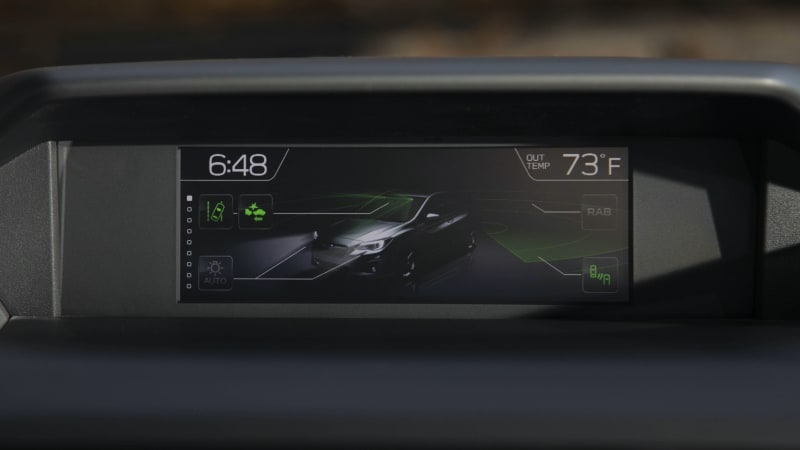 How big is the Crosstrek?

Subaru officially lists front legroom at 43.1 inches and rear legroom at 36.5 inches. That would put it above the little Toyota C-HR and between the reasonably sized Jeep Renegade and spacious Honda HR-V. In the real world, though, there’s plenty of space for four 6-foot-tall passengers and perhaps more so than the official numbers and competitor comparisons would indicate.

There’s 20.8 cubic feet of cargo space behind the rear seats and 55.3 with those seats folded. That may be less than the shockingly spacious HR-V and Nissan Kicks, but it’s more than every other subcompact and pretty comparable to various midcompact SUVs. The area is deep and wide, which makes up for its comparative lack of height. You can read our real-world cargo capacity test here where we managed to fit six pieces of luggage back there. A word of warning, though: none of the above applies to the Crosstrek plug-in hybrid. Its battery pack raises the cargo floor considerably and thus greatly reduces space both on paper (15.9 cubic-feet) and in terms of what you can actually store back there since it reduces the cargo area’s height even more.

A roof carrier seems like a must have for the hybrid, and judging by current Crosstrek owners, not a bad idea for the regular version as well. Thankfully, the Crosstrek’s standard roof rails are big, sturdy and are of the raised design, meaning you can use your own crossbars of choice that can most likely be transferred between cars. The Crosstrek’s roof is also lower than the typical crossover SUV, making it easier to load things up top. 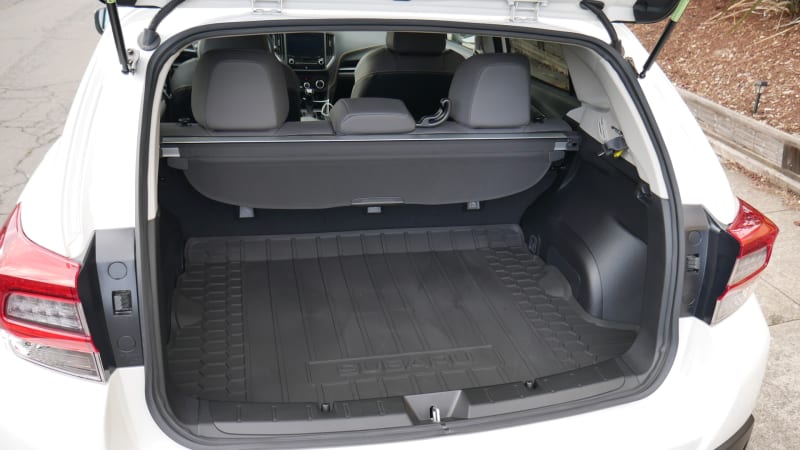 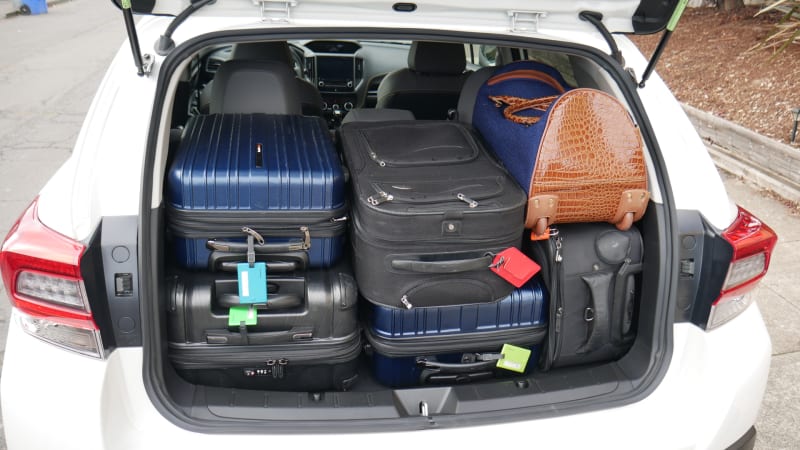 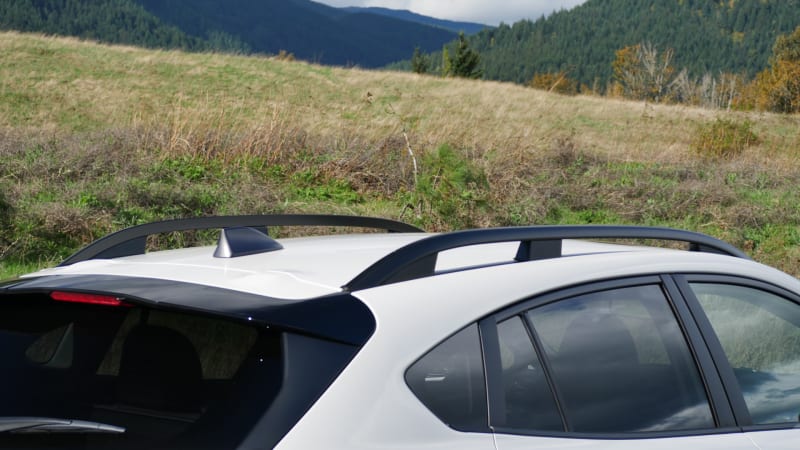 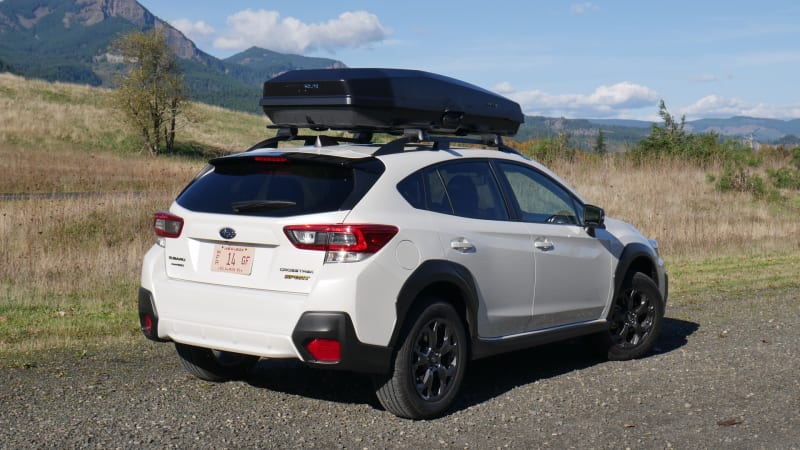 What are the Crosstrek fuel economy and performance specs?

The Crosstrek’s base engine is a 2.0-liter four-cylinder that makes 152 horsepower and 145 pound-feet of torque. Those ponies are sent through a standard six-speed manual transmission or an optional continuously variable automatic. All-wheel drive is standard across the board. Subaru says this base engine can push a Crosstrek to 60 mph in 9.7 seconds, which is very slow, even for this segment of slow vehicles. CVT-equipped 2.0-liter Crosstreks get EPA ratings of 28 mpg city, 33 mpg highway and 30 mpg combined. The few shift-for-yourselfers who choose the standard six-speed manual fare far worse with EPA ratings of 22/29/25.

Sport and Limited models come standard with a 2.5-liter four-cylinder with 182 hp and 176 lb-ft of torque. Subaru says Crosstreks equipped with the larger engine can do 0-60 in a far more competitive 8.2 seconds, and that’s unusually with a driver, a passenger and a dog onboard (Great Dane or Chihuahua? Subaru didn’t specify). The bigger engine doesn’t have a noticeable effect on fuel efficiency. The larger 2.5 gets basically the same fuel economy at 27/34/29.

Buyers looking for the most fuel efficient Crosstrek will want to look at the plug-in hybrid version. It pairs a 2.0-liter engine with a pair of electric motors and an 8.8-kWh lithium-ion battery pack supplied by Toyota. Total power output for the hybrid drivetrain is 148 horsepower. Unfortunately, the plug-in is only good for a modest 17 miles of all-electric range. On the other hand, it’s rated at 90 MPGe combined gas and electric, and a solid 35 mpg combined on gas only. Additionally, it doesn’t take long at all to charge it up. It’ll refill in about two hours on a Level 2 charge, or five hours on a regular household 120-volt outlet. 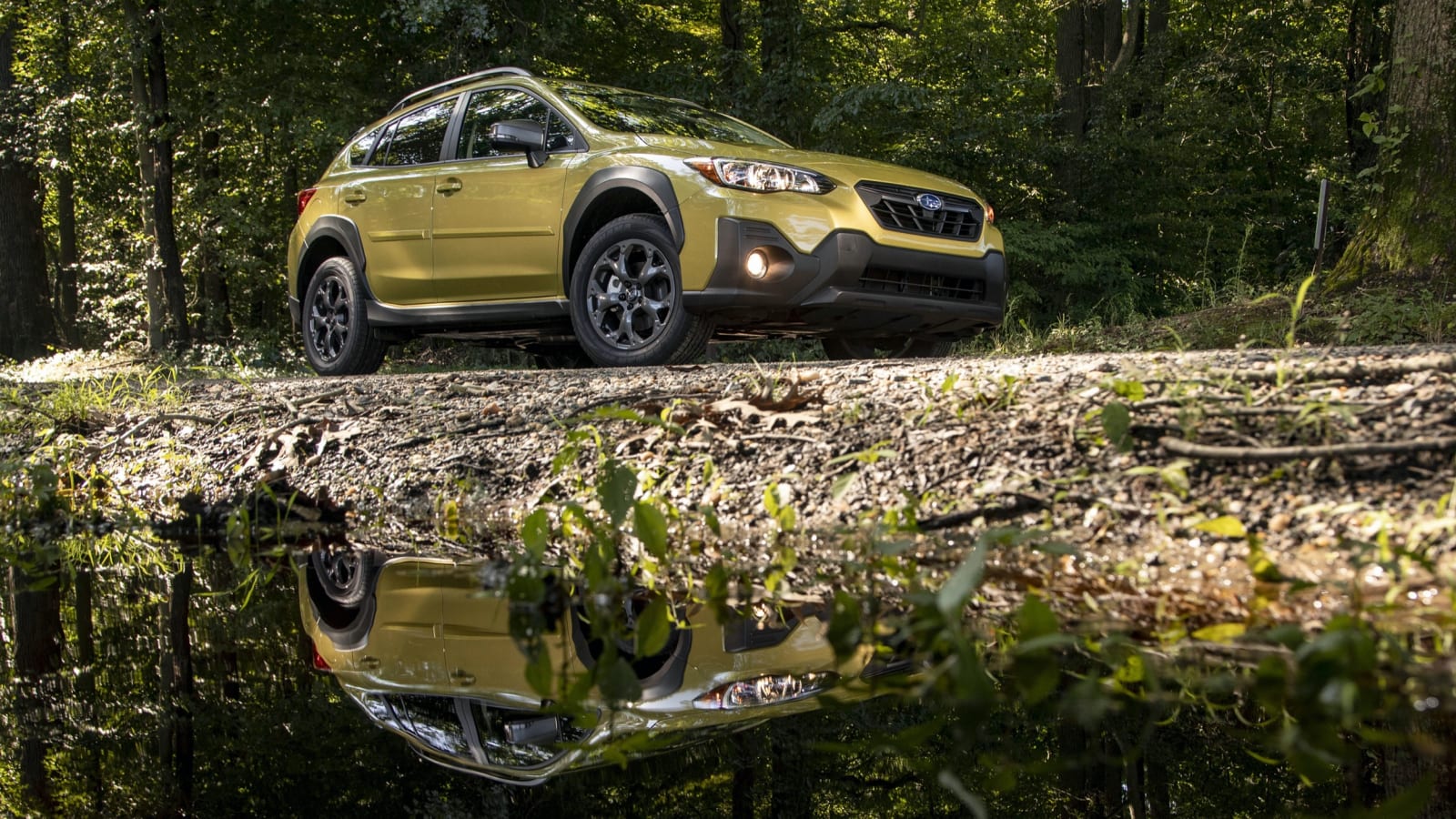 The base 2.0-liter takes an agonizingly long time to get up to speed, something noticed by our editors and current Crosstrek owners alike. As such, we strongly recommend stepping up to the 2.5-liter engine if at all possible. It doesn’t remotely turn the Crosstrek into a rocketship, but it does slide this 3,300-pound vehicle up the scale from underpowered to properly powered. Passing maneuvers no longer elicit panic, and freeway onramps don’t immediately send the engine to dronesville.

Really, the added power was all the Crosstrek needed. It rides well, with good comfort from what feels like greater suspension travel than subcompact SUVs like the Hyundai Kona and Toyota C-HR. There’s quite a lot of body roll in quick transitions (lifting a compact hatchback to a ride height greater than most SUVs tends to do that), but in this class of vehicle that’s a reasonable tradeoff for big-bump cushiness. The Crosstrek’s steering is a little overboosted and numb, but we appreciate the quick 13:1 steering ratio that makes the car feel nimble and quick to change direction with a light flick of the wrists. It’s also noticeably more responsive and confidence inspiring than the rather inert steering of an Outback or Ascent.

Drivers with sporty intentions may also appreciate the steering wheel-mounted paddle shifters on Premium, Sport and Limited trim levels. There aren’t any actual gear changes happening from the CVT, but they do lock the transmission into eight predetermined virtual gears, which is nice when setting up for a winding road or when you want to use engine braking down long downhill grades.

What other Subaru Crosstrek reviews can I read? 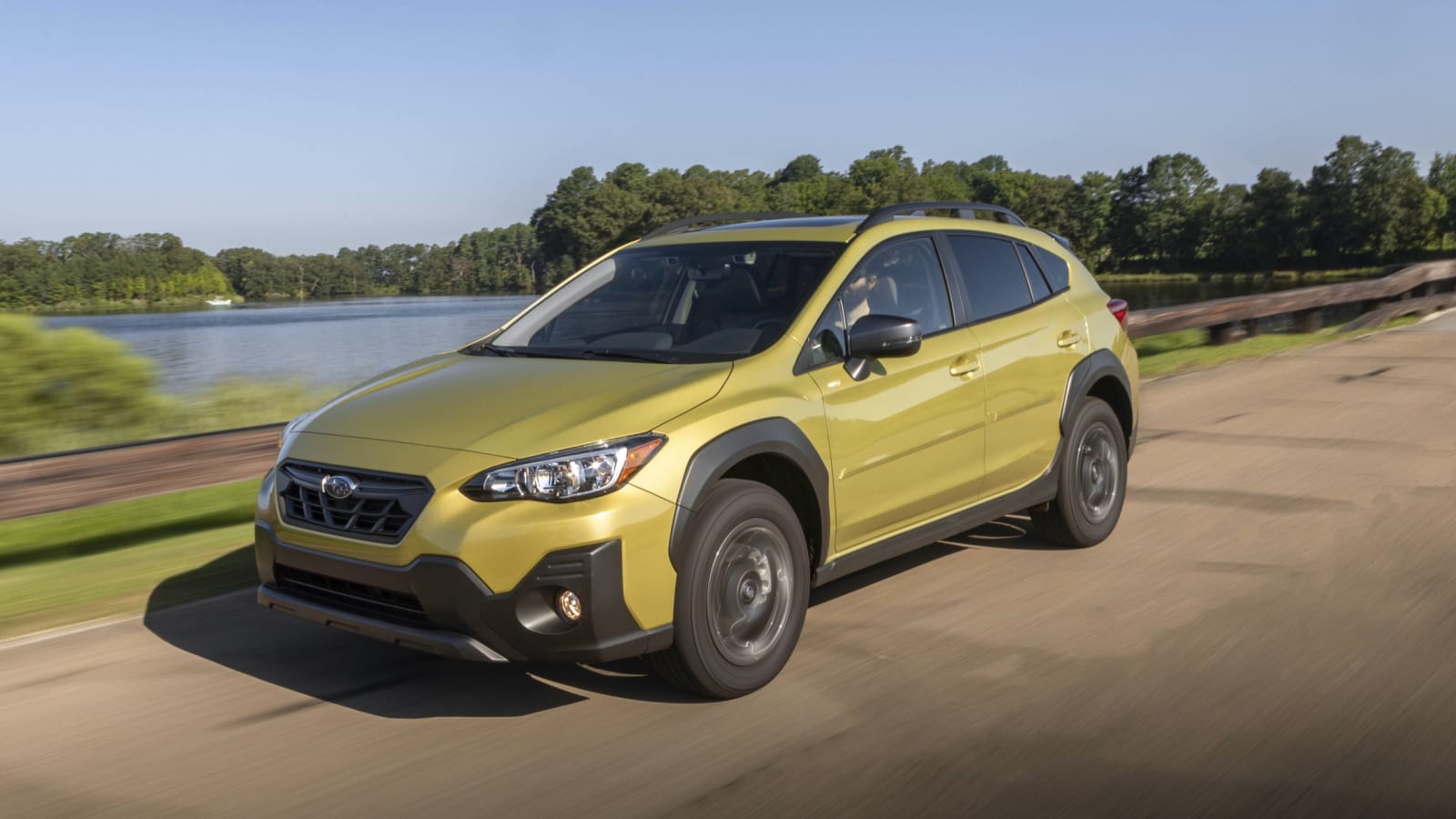 Buyers who want an affordable all-wheel-drive compact crossover — a popular combination — but also want a plug and freedom from range anxiety will find plenty to like in the Crosstrek Hybrid. 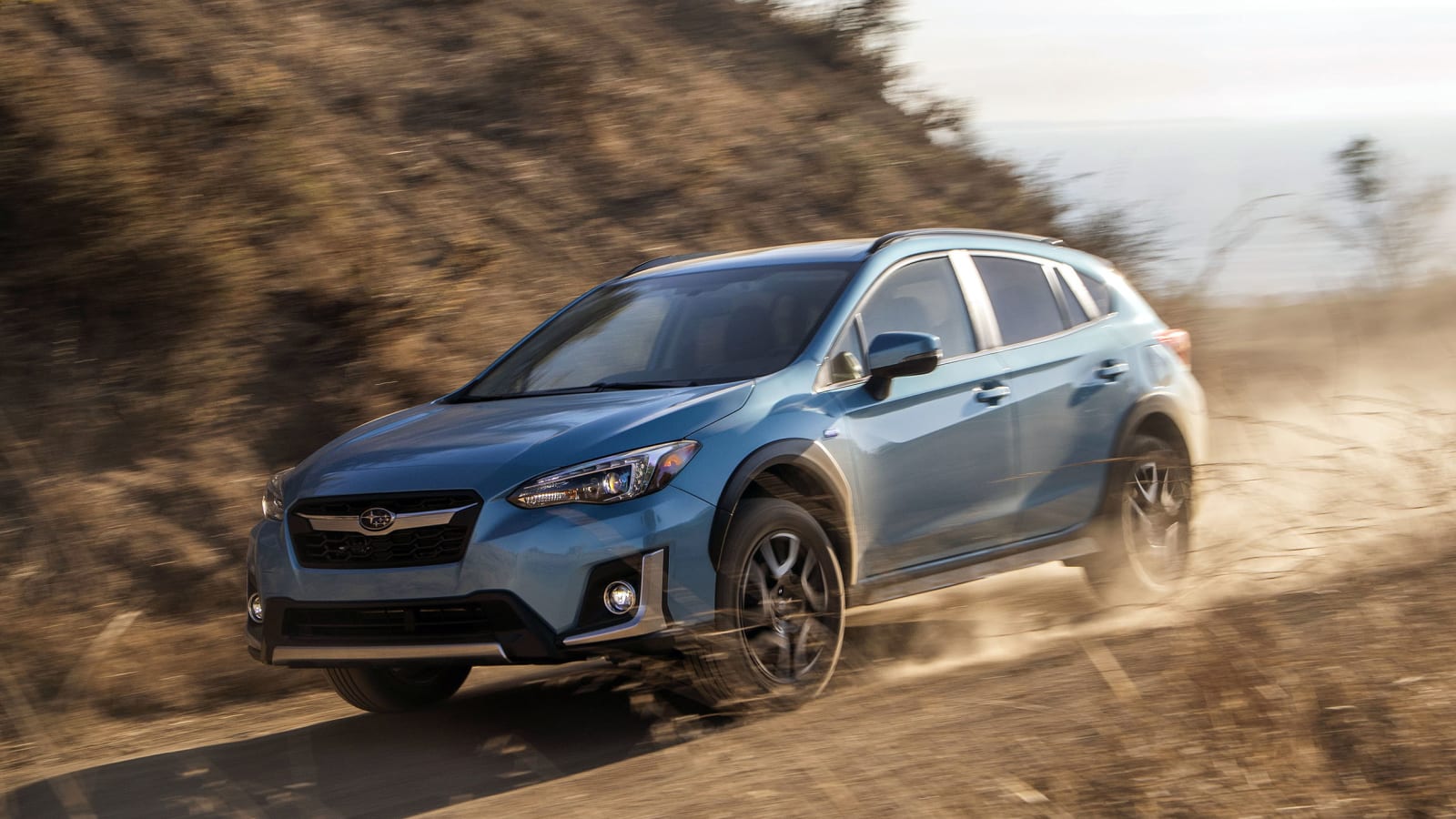 2021 Subaru Crosstrek Luggage Test | How much fits in the cargo area?

It doesn’t look very big, but the numbers say it’s better than most other subcompact crossovers. We put that to the test with actual stuff. 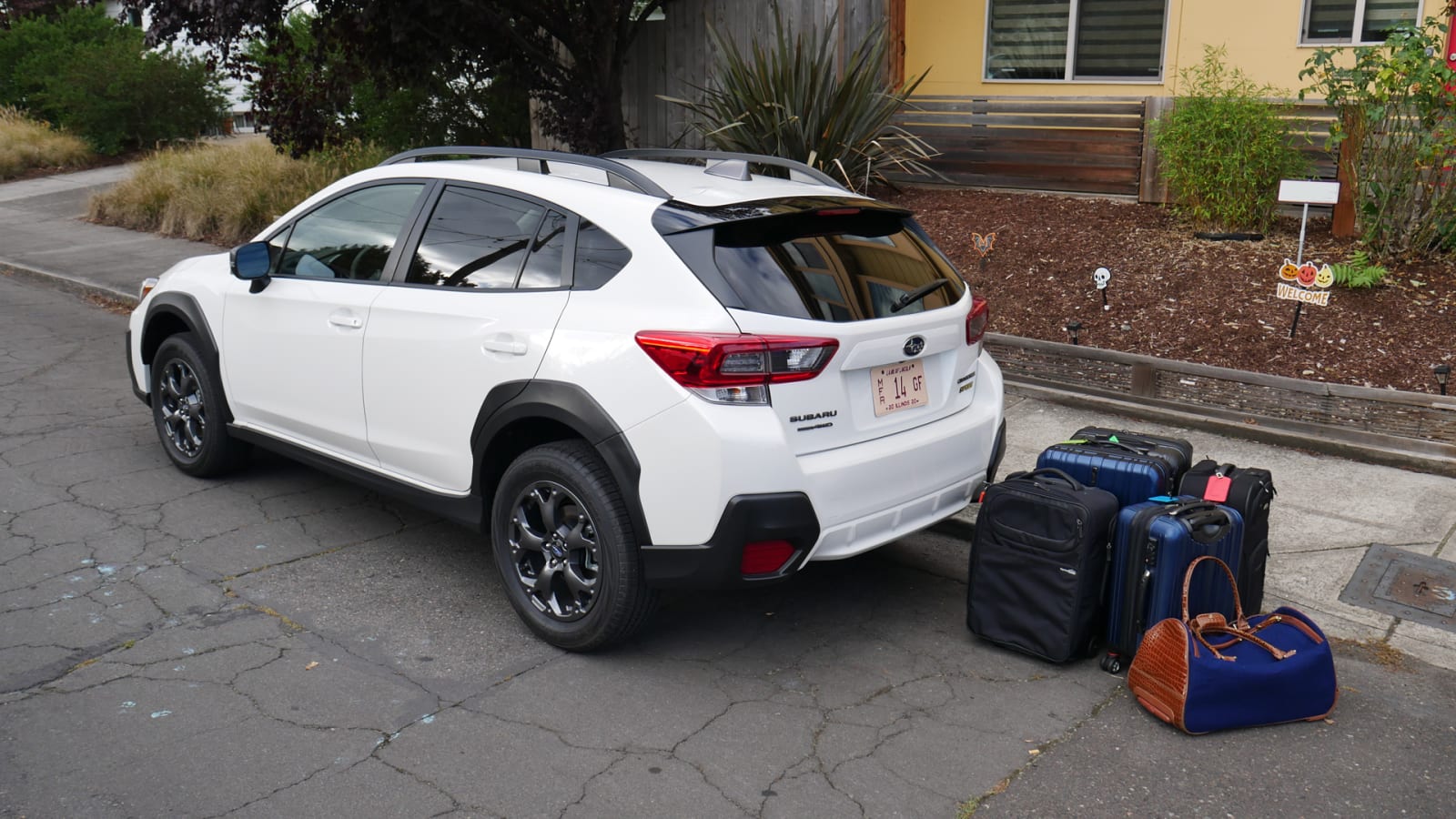 How much is the 2022 Crosstrek price and what features are available?

The base car includes all-wheel drive, 17-inch alloy wheels, roof rails, rear privacy glass, a height-adjustable driver seat, automatic climate control, a 6.5-inch touchscreen, Apple CarPlay, Android Auto and a four-speaker sound system. When you opt for the CVT (be it the base or Premium trim levels), you also get Subaru’s EyeSight driver assistance systems (see Safety section) along with Intelligent and Sport drive modes, hill-descent control and a color instrument panel display. 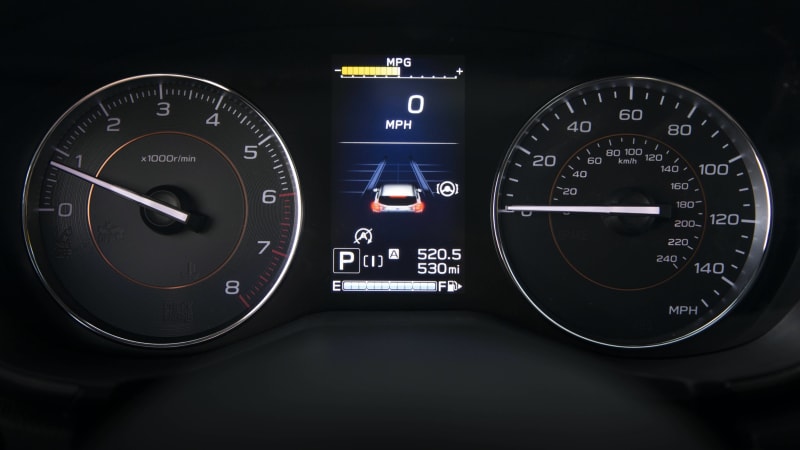 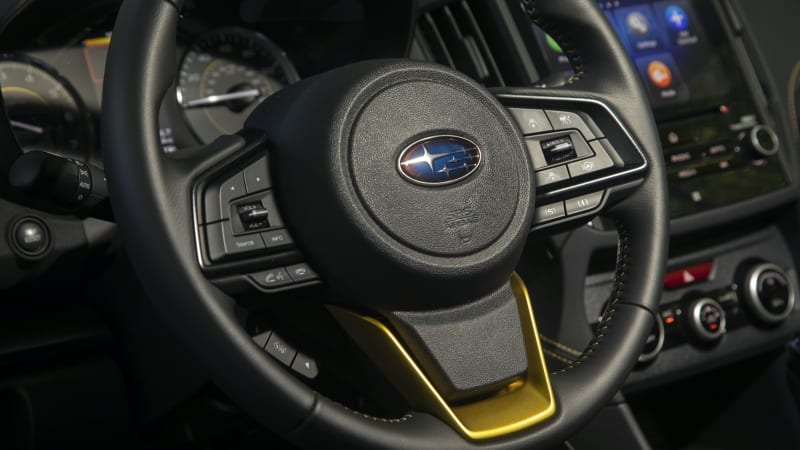 What are the Crosstrek safety ratings and driver assistance features?

The Crosstrek received a five-star safety rating from the National Highway Traffic Safety Administration and the Insurance Institute for Highway Safety gave it the highest Top Safety Pick+ award last year. Its top crash scores have not changed for 2022, but the IIHS had not published updated scores for crash prevention tech or headlights at the time of this writing.