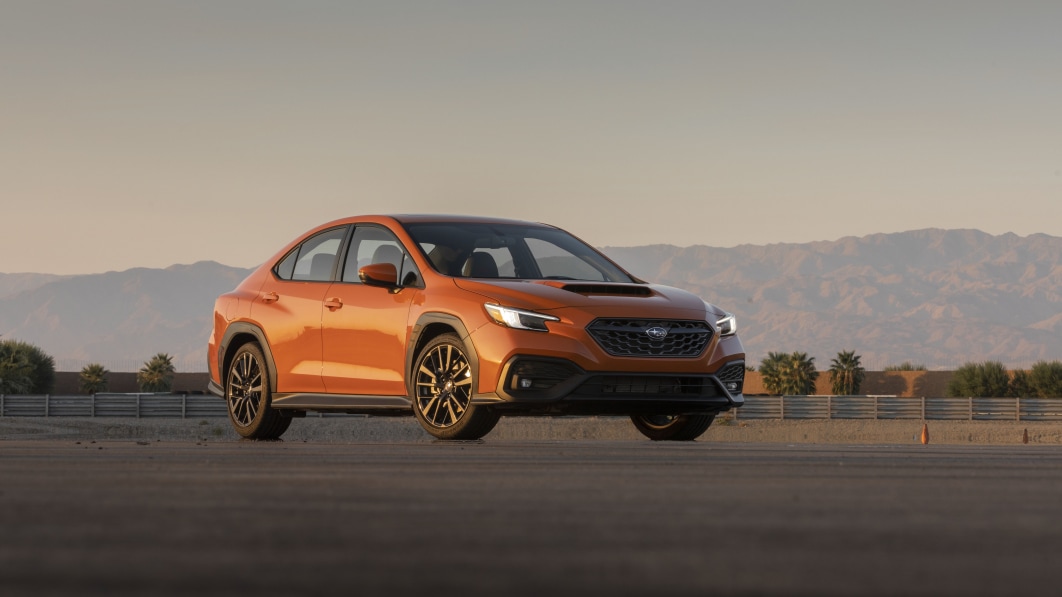 HEALDSBURG, Calif. — Our first look at the 2022 Subaru WRX was brief and suffered from a distinct lack of driver’s seat time. That demonstration was also geared toward showing off the competency of its overhauled “Subaru Performance Transmission,” which is a tarted-up CVT by another (just as long, somehow?) name. This time, we got the car to ourselves and the only models available were Premium and Limited trims equipped with the six-speed manual – the meat and potatoes of WRX sales volume with a take rate that exceeds 75%.

Sending power to that gearbox is a new 2.4-liter turbocharged boxer-four that makes 271 horsepower and 259 pound-feet of torque. Those figures are effectively the same as the old 2.0-liter boxer-four, but the larger engine offers a much broader torque curve than the one it replaces. The base model checks in at just 3,297 pounds (not bad for AWD, even for a compact), the Premium at 3,320 and the Limited at 3,390. All of those figures are virtually identical to the outgoing WRX.

Subaru has made a big to-do about the 2022 WRX being the first to be fully differentiated from the Impreza on which it has historically been based. We’re pretty sure something similar was said last time, but in practical terms, the new WRX rides on an evolution of the same global platform shared by most Subarus, including the Impreza, and shares no body panels with that car despite both being compact sedans. Even the greenhouse shape was tweaked slightly. Plus, you know, that cladding. Subaru says the honeycomb texture on the plastic smooths out turbulence near the wheel wells, improving the car’s performance aerodynamically and maybe even cutting down on some wind noise.

The six-speed is quite good. The clutch pedal feels alive in a way you don’t often find in sporty cars based on a mass-market offering, making it a snap to locate the engagement point and time shifts. If we’d change anything, we’d ask for some slightly taller gearing in first and second, as you’re out of both so quickly due to the 2.4-liter’s 6,000 RPM redline. Third gear is pretty flexible, but low-speed switchbacks will catch it flat-footed. 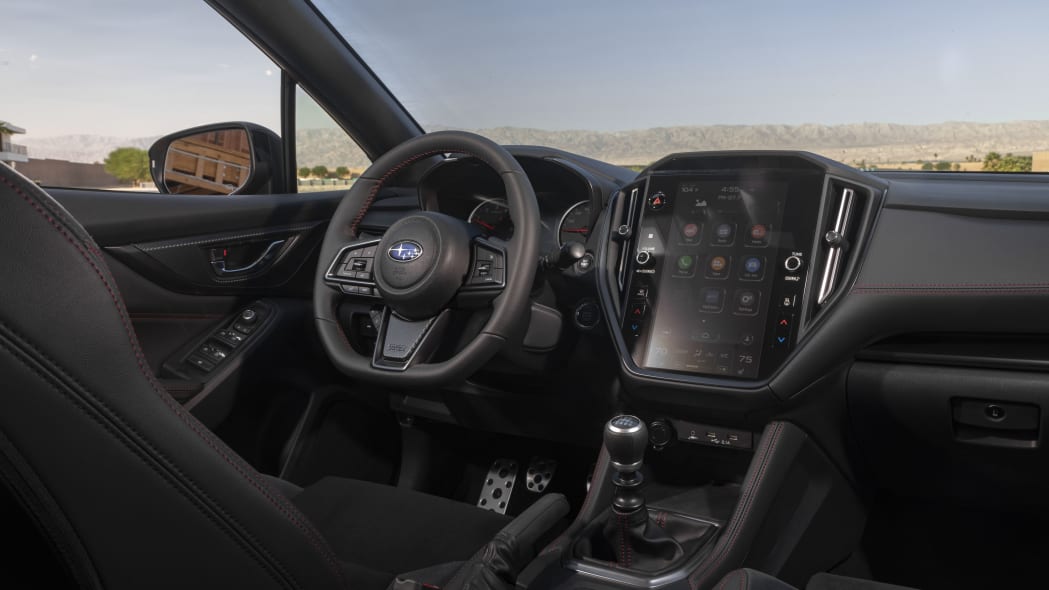 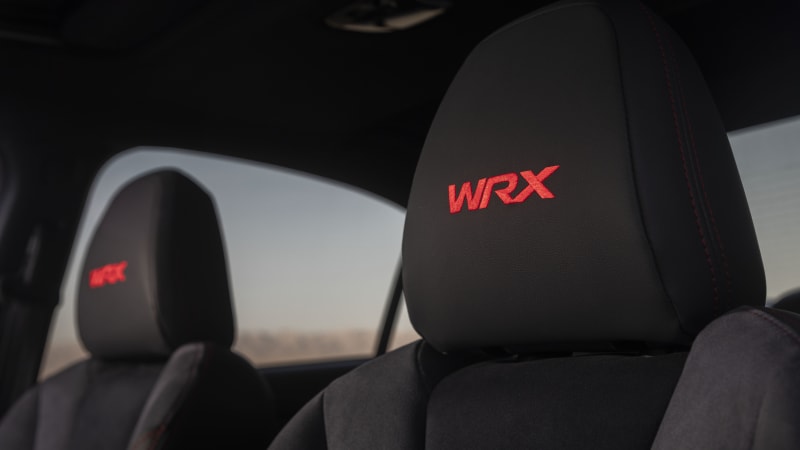 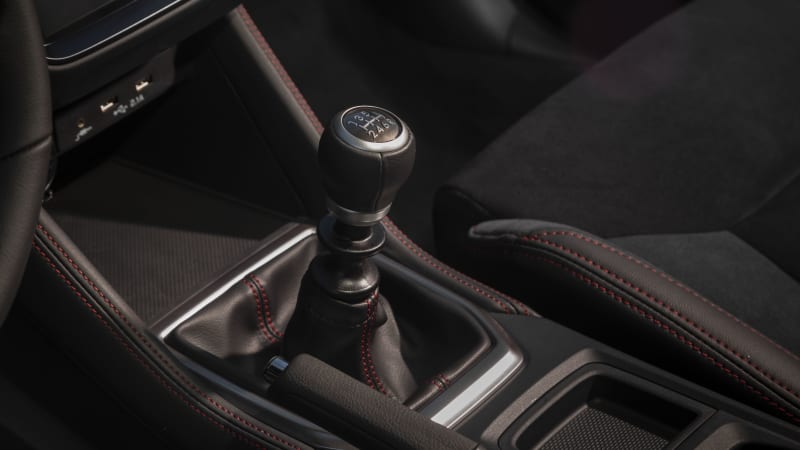 When we weren’t busy dodging freshly fallen rocks and trees on a route that took us from Santa Rosa, Calif., to Point Arena on CA-1, it still managed to be cold, windy and in the shady parts, still slick from days of rain. We even saw the occasional burst of graupel – not quite hail and not quite sleet but definitely frozen. AWD enthusiasts would have approved. Despite the occasionally hostile temperatures (elevation-dependent), the Dunlop SP Sport Maxx tires gripped admirably, and the WRX offered no objections as we enthusiastically scrubbed up their sidewalls.

It’s easy to dismiss Subaru’s claims about the boxer’s low center of gravity as mere marketing bluster, but it does make a difference. Even the Impreza, with its thoroughly uninspiring engine, still handles beautiful for a fairly basic compact sedan. The WRX is that, only sharper and with way more ultimate grip. While Dan was prepared to write off the perceived lack of understeer in his ride-along as a testament to the skill of the professional behind the wheel, we saw for ourselves just how eagerly the new WRX turns in.

While its approach to putting power down may be an application of brute force at all four wheels, it’s not merely a muscled-up Impreza. It’s light on its feet for its size, it responds to steering inputs beautifully and the all-wheel drive imparts tremendous confidence.

The WRX’s new platform is stiffer both laterally and torsionally, and Subaru took advantage of the added chassis rigidity to soften up the damping a bit in order to improve ride quality. Since our testers all had the fixed steel suspension, we got to see the results of this firsthand. Our route took us over some heinously pockmarked Sonoma County roads, and while the WRX was far from supple, it wasn’t punishing. We did note some pretty significant road noise on the rougher surfaces, but nothing out of line with our expectations for the car. 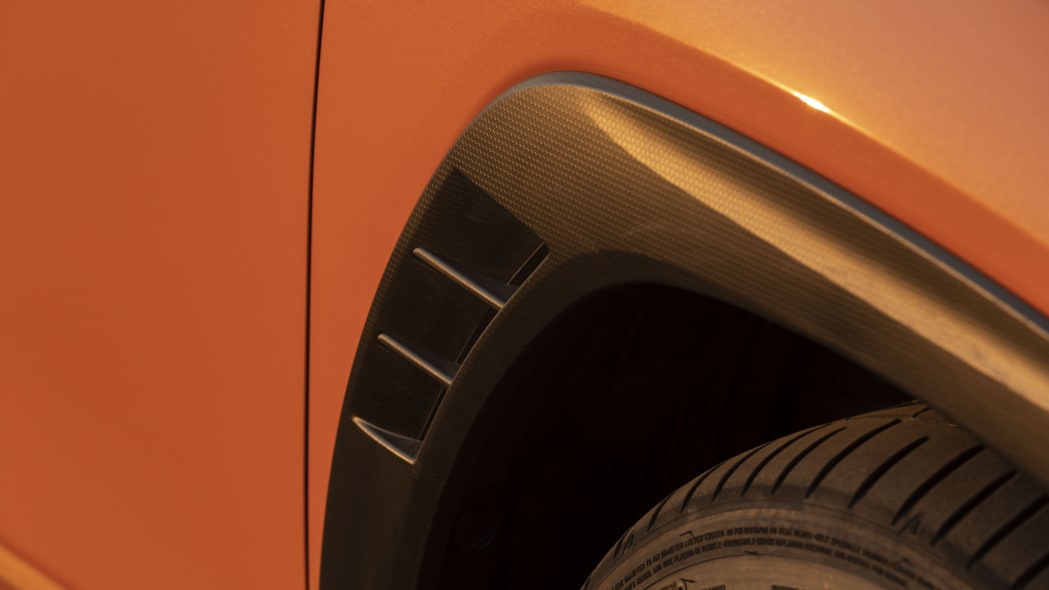 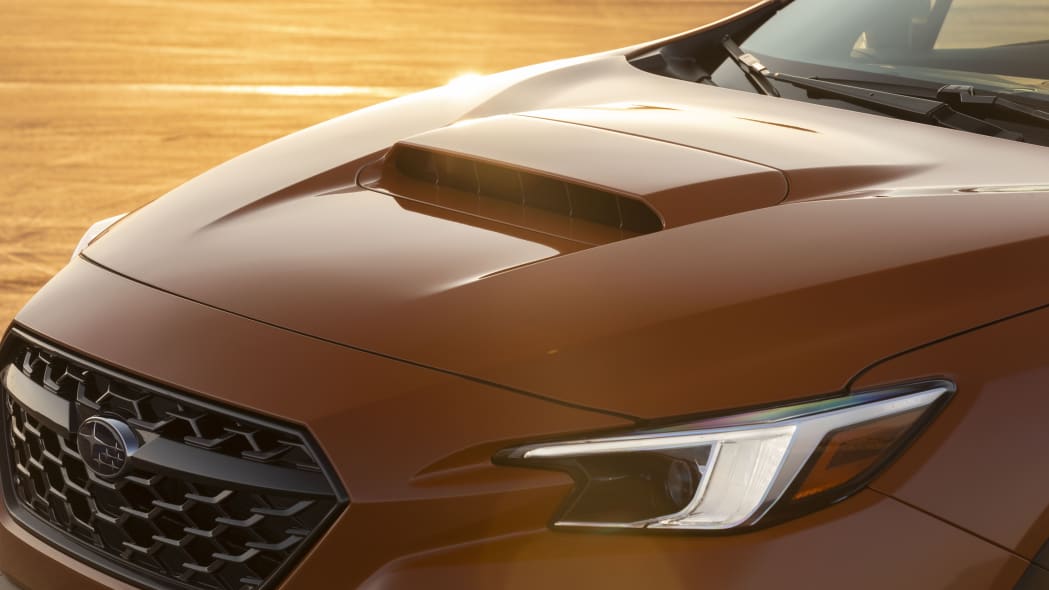 The interior is unique to the WRX. Soft surfaces are few and far between, but Subaru at least put some effort into design and material aesthetics. Carbon weave pattern on one section breaks up the inner door trim nicely, for example, and the stitching and fit throughout the cabin all present well. The new WRX is slightly lower than the old one but is a touch roomier inside with the exception of rear headroom, which suffered slightly from the lowered roofline.

The available 11-inch infotainment screen that’s shared with the Outback rather than the Impreza and other Subarus, absolutely dominates the dash and is reasonably easy to use. We’ll dock them slightly for the lack of wireless Android Auto and Apple CarPlay, at least in the pre-production cars we were able to sample, but that’s our only major gripe with the tech. It’s not the most robust system out there, but it works. The base system fills the same space with two screens separated by buttons within a black plastic panel – it’s probably easy enough to use but looks like an aftermarket application.

This gives us another chance to gripe about the fact that some of the coolest driver’s gadgets are relegated to the new GT model, which is available exclusively with the CVT SPT. Adaptive dampers? GT only. Recaro seats? GT only. Selectable (and configurable) drive modes? You guessed it. And if this were just about any other car, we’d accept at face value that Subaru’s bean-counters couldn’t justify the stickshift in a premium offering. But when the automatic is the rarer choice, that excuse just doesn’t fly.

Subaru has another one in the chamber though: conquest sales. The GT is “white space” for Subaru, meaning it didn’t exist before, and Subaru says it was created almost deliberately to attract people other than traditional WRX buyers. Those who want the automatic, the fully loaded cabin, the electronic gizmos and the full EyeSight safety suite, in other words – not the track junky who wants the cheapest trim with all of the performance parts and none of the unnecessary frills. We’re not sure where this hypothetical buyer stands on vaping; we forgot to ask. 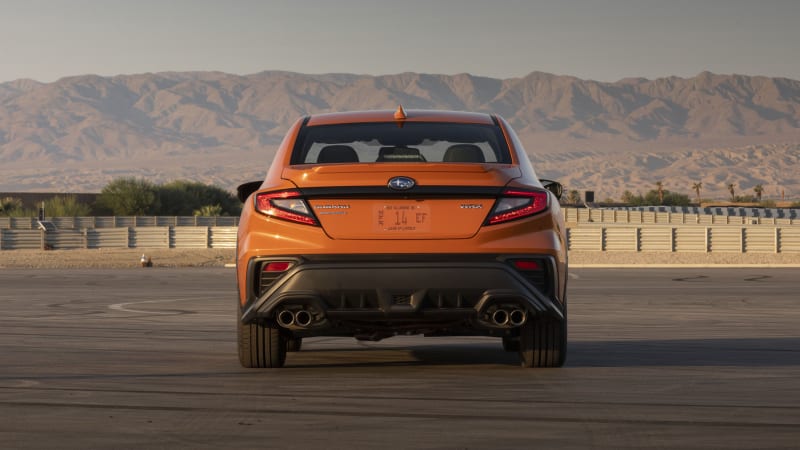 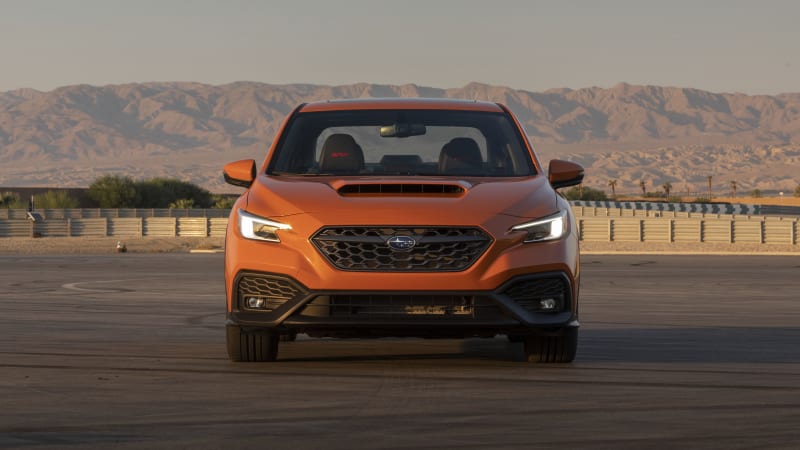 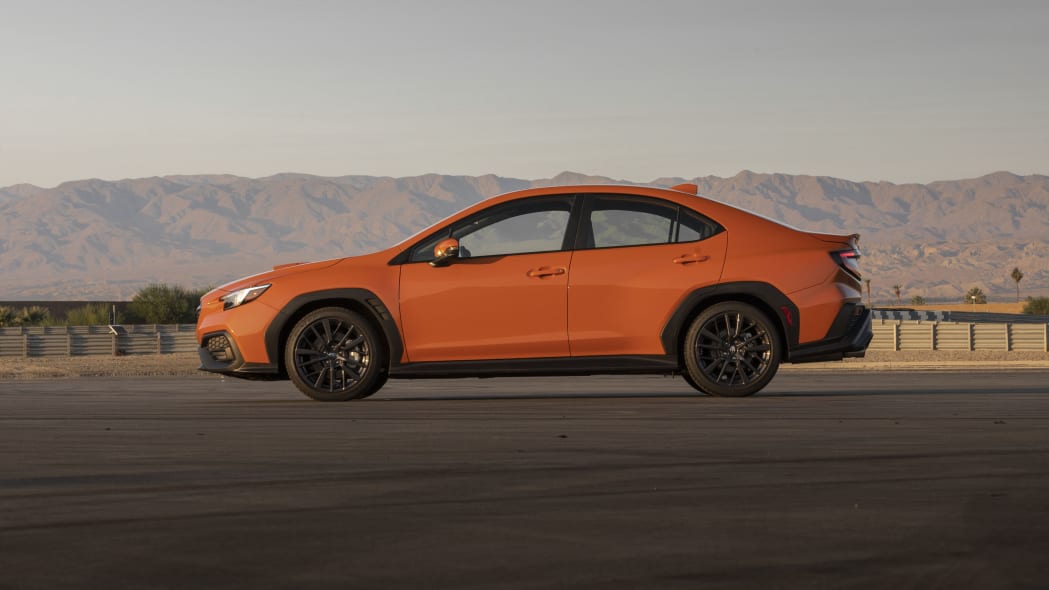 For all of this consternation regarding Subaru’s decision to firewall some of the WRX’s more interesting features behind the CVT SPT, there is a path to redemption. The GT is not the pinnacle of WRX performance, nor will it be the best-equipped version for long: We don’t know the details, but a new STI is coming.

Until then, the WRX versions we drove essentially prove that the Impreza has a wonderful chassis in search of more power. If you can get past the looks, which work surprisingly well in person, and the transmission kerfuffle, what you’ll find is a refined take on a tried-and-true formula. The quasi-redesigned Nissan Z, Cadillac CT4 and CT5, and even Subaru’s own BRZ (alongside the Toyota GR86) have proven that gasoline-powered enthusiast cars are not where automotive product development is devoting its effort and dollars. That’s a refrain enthusiast buyers should get used to – unless they’re willing to look beyond gas engines.

We’ll get another shot at the WRX when Subaru is able to crank out a few more early builds with the totally-not-a-CVT. The company says the gap should be relatively small, so you won’t have to wait too long. Even if you’re in the 75% of potential buyers who don’t care about it, it’s a milestone worth watching out for, because it means the next thing coming down the pipeline is STI.