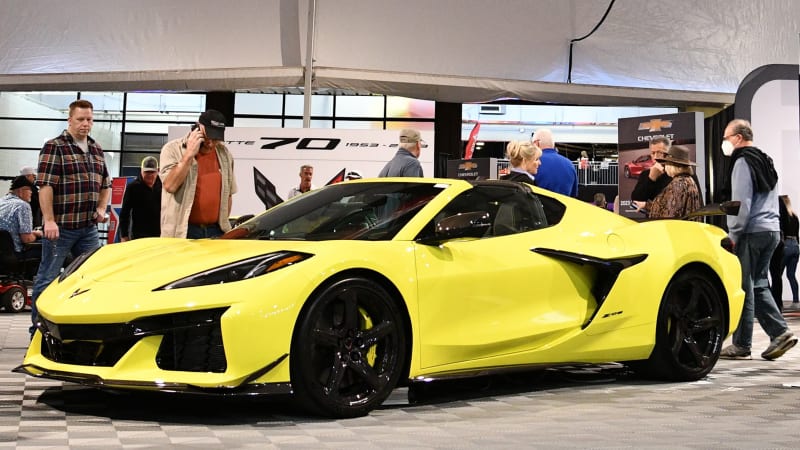 When we learned that Chevrolet would auction the first retail 2023 Corvette Z06 for charity at this month’s Barrett-Jackson Scottsdale auction, we figured there’d be another Corvette record in the making. The last charity Corvette the auction house sold was the first 2020 C8 Corvette, which NASCAR team owner Rick Hendrick bought for $3 million. With his winning bid, Hendrick set the benchmark hammer price for a Barrett-Jackson charity car, eclipsing the $2.9 million paid for the last front-engined Corvette in 2019. On January 29 at around 8:30 p.m., bidding began for this new tilt, and sure enough, the Z06 set a new charity auction benchmark for a vehicle donated by an OEM at $3.6 million. The winning bidder was, again, Rick Hendrick, the selfsame chap who bought the first retail 2020 C8 Corvette Stingray two years ago for $3 million.

The NASCAR team owner, Chevrolet dealer franchisee and GM Defense contractor didn’t just buy a Z06 VIN 0001, he bought one of the recently announced 70th Anniversary cars. The special edition starts with two new exterior colors unique to the 70th AE, White Pearl Tri-coat and Carbon Flash Metallic, available with optional accent stripes in Satin Gray for the White Pearl, Satin Black for the Carbon Flash. The 70th AE cars also get unique wheels and center caps, finished in Carbon Flash with an Edge Red stripe. Edge Red graces the brake calipers and the Stingray’s engine cover, while Anniversary Edition badging graces body panels outside and cabin surfaces inside. The package also comes with a rear bumper protector, trunk cover and a set of custom luggage. And while the cosmetic fripperies are locked in, a Chevy spokesperson told Autoblog, “Customers maintain the ability to add Z51/Z07 performance packages, performance aero accessories, carbon fiber interior accessories and features like that” for more performance if they’re willing to pay.

Every cent of Hendrick’s largesse is being donated to Operation Homefront, Barrett-Jackson forgoing its usual fees, and an unnamed benefactor donating another $100,000 to make $3.7 million in total. The 20-year-old nonprofit Operation Homefront exists to help the post-9/11 wounded, military families and veterans with financial assistance and housing support. Chevrolet has been involved with the charity for more than five years, donating funds and Silverado pickups. Operation Homefront’s president & CEO, retired U.S. Army Brigadier General John I. Pray, Jr., said the organization has spent around $35 million to answer more than 50,000 requests for assistance.

About the only auction-based Corvette record left to beat is the most expensive sale in the model’s history, a 1967 L88 Coupe with a hammer price of $3.85 million at Barrett-Jackson’s 2014 Scottsdale auction. Until that sale happens, congratulations to everyone involved in this one.