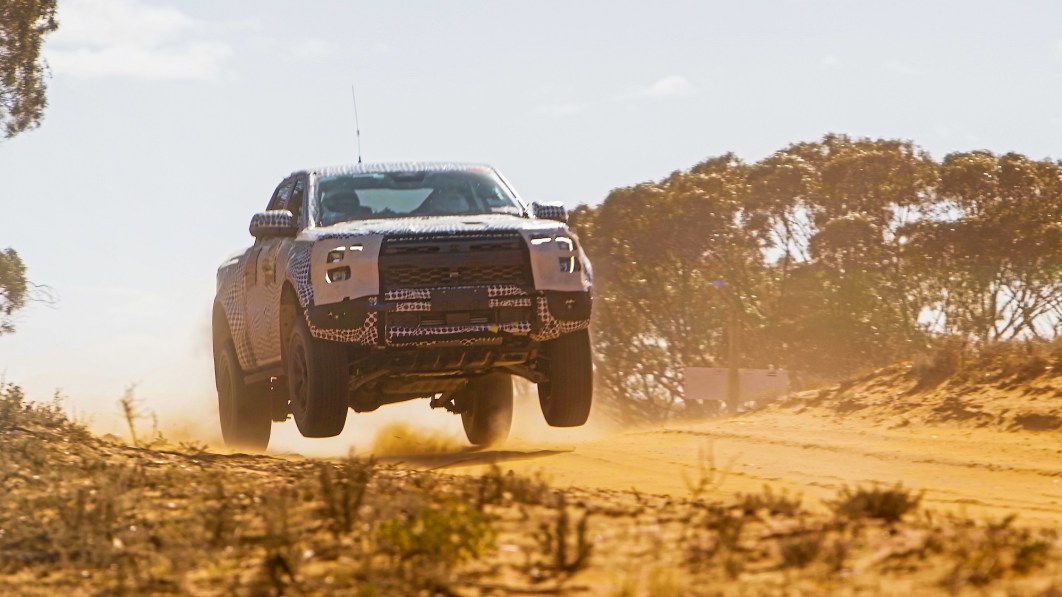 The global version of Ford’s next-generation Ranger is out of the box, which means that the dune-hopping Raptor-badged variant isn’t far behind. Official spy shots and videos published by the Blue Oval give us a better idea of what to expect from the model when it breaks cover.

Ford’s photos are less revealing than the last batch of shots our spies sent us. We already know that the Raptor will stand out from the regular-production Ranger thanks to a specific grille with familiar-looking “FORD” lettering and bigger tires tucked under flared wheel arches, among other changes. Inside, red accents on the steering wheel and on the dashboard will help set the two pickup trucks apart.

What’s perhaps more telling is the video (embedded above) that accompanied the release. Crank it up: that doesn’t sound like a diesel engine, does it? Nothing is official yet, but it seems like the 2.0-liter turbodiesel four-cylinder that powered the last-generation Raptor will not return for a second dance in the desert. Unverified rumors claim that power will instead come from the same 3.0-liter, twin-turbocharged V6 that powers the recently-unveiled Bronco Raptor. It could make over 400 horsepower, though even the Bronco’s figures aren’t out yet.

Exploring the far, unlit stretches of the speculation path leads us to Europe, where the Ranger Raptor is relatively popular. It’s certainly not a high-volume model, but it enjoys a loyal following. However, various taxes and regulations keep motorists out of cars and trucks with large-displacement engines, so swapping the 2.0-liter turbodiesel for a gasoline-burning V6 is like committing sales suicide. Again, this is merely a hunch, but we would not be surprised if Ranger Raptor models built for some global markets end up with another engine under the hood.

Ford’s European division will introduce the next-generation Ranger Raptor online on February 22, 2022, at 8:00 a.m. CET, which is — sorry, everyone across the pond — 2:00 a.m. in New York and 11:00 p.m. on February 21 in California. Sales should start shortly after. What remains to be seen is whether the baby Raptor will be sold in the United States this time around. The first-generation Ranger Raptor wasn’t, a decision partly made due to the turbodiesel engine that powered it, but the rumors claiming this one is America-bound are getting louder.