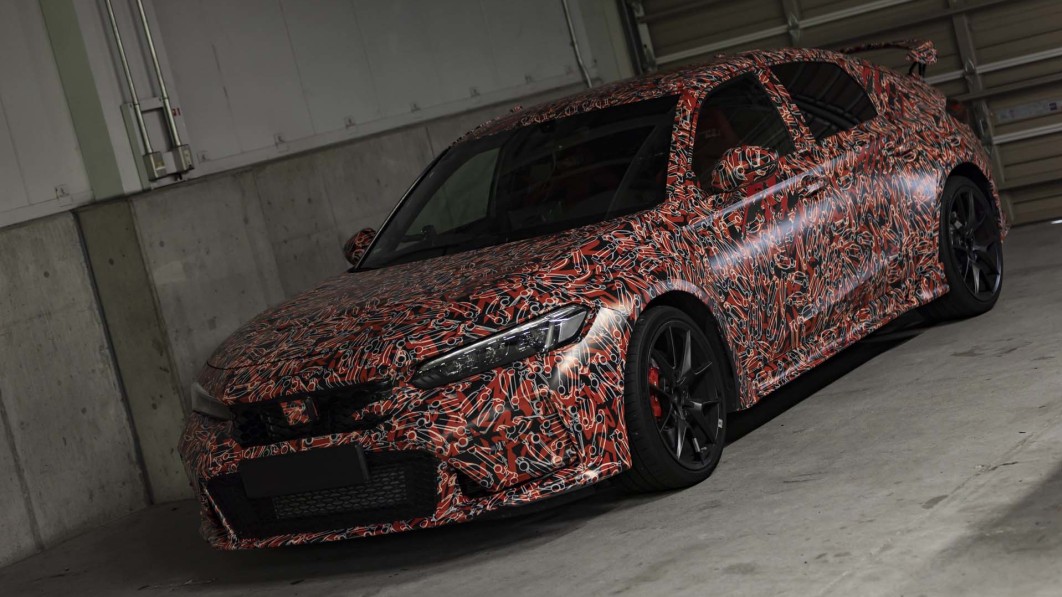 Honda again undermined the work of spy photographers around the world by publishing images of a fully-camouflaged 2023 Civic Type R. The pre-production prototype is shown undergoing a series of high-speed validation tests on the Suzuka Circuit alongside its predecessor.

While the hatchback’s final design is literally kept under wraps, we can tell that several key styling cues will differentiate it from the standard version of the 11th-generation Civic. Up front, it receives a bigger grille and larger intakes that direct more cooling air into the engine bay. It wears model-specific side skirts on both sides, and its rear end features a big rear wing plus a trio of cool-looking exhaust outlets. New-look wheels add a finishing touch to the design, while a lower ride height hints at the suspension changes that engineers are testing at Suzuka.

Honda stopped short of publishing interior photos, but earlier spy shots suggest that the Type R’s cabin is very close to the regular Civic’s. Some of the new parts include sport seats for the front passengers, an aluminum (or aluminum-look) shift knob, and red stitching.

Similarly, there are no official details about what kind of engine will trumpet its song through the three exhaust tips. We’re not expecting a massive departure from the last-generation Type R, however. Power will probably come from a 2.0-liter four-cylinder engine turbocharged to develop over 306 horsepower and 295 pound-feet of torque. Front-wheel-drive will continue to come standard, it doesn’t sound like Honda is planning to steer the Type R into all-wheel-drive territory, and buyers will need to choose between a manual and an automatic transmission.

Honda will unveil the next Civic Type R in 2022 and sales will begin during the 2023 model year. Until then, the Si will remain the quickest and most engaging member of the range; it’s powered by a 1.5-liter four-cylinder engine that’s turbocharged to 200 horsepower.

Previous articleBiden denounces Kellogg’s plan to replace striking workers
Next articleThis Land Rover Defender is Corvette-powered, and you can win it