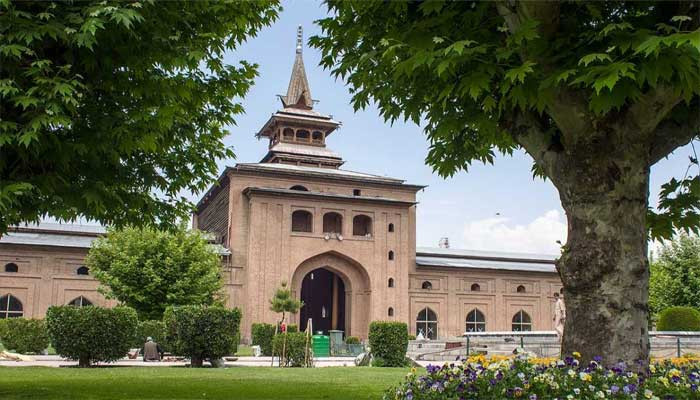 SRINAGAR: Jamia Masjid, the grand mosque of Srinagar, dominates its neighborhood with an imposing main gate and massive turrets. It can hold 33,000 worshippers, and on special occasions over the years hundreds of thousands of Muslims have filled nearby lanes and roads to offer prayers led from the mosque, foreign media reported on Thursday. But Indian authorities see the mosque as a trouble spot — a nerve center for protests and clashes that challenge India’s sovereignty over the Indian Illegally Occupied Jammu and Kashmir (IIOJ&K).

For Kashmiri Muslims it is a sacred venue for Friday prayers and a place they can raise their voices for political rights. In this bitter dispute, the mosque in Kashmir’s main city has largely remained closed for the past two years. The mosque’s chief cleric has been detained in his home almost nonstop throughout that time, and the mosque’s main gate is padlocked and blocked with corrugated tin sheets on Fridays.

The closure of the mosque, which is revered by Kashmir’s mostly Muslim population, has deepened their anger. “There is a constant feeling that something is missing in my life,” said Bashir Ahmed, 65, a retired government employee who has offered prayers at the mosque over five decades. In the past, officials have said the government was forced to close themosque because its management committee was unable to stop anti-India protests on the premises.