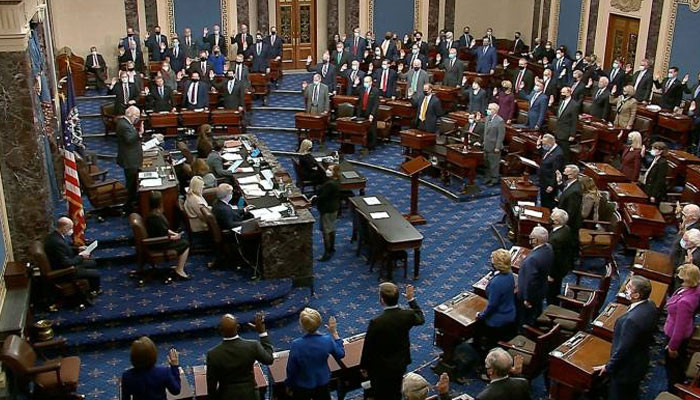 WASHINGTON: The annual defense bill is stalled in the Senate amid a bitter disagreement over one senator’s demand to punish China over its alleged treatment of the Uyghurs.

Republicans and Democrats are rejecting the demand by Sen. Marco Rubio, a Florida Republican, to add an amendment because they say it violates a constitutional requirement that legislation that raises revenue originate in the House.

The National Defense Authorization Act, or NDAA, is an annual must-pass piece of legislation that sets the policy agenda for the Pentagon and authorizes about $780 billion in funding to put its agenda into action. It has passed Congress for the past 60 years and is a top priority for lawmakers. It has been bogged down in the Senate after a failed procedural vote earlier this week and failed attempts from Democrats and Republicans to come to an agreement on a package of amendments.

Bipartisan senators finally appeared to reach an agreement on a package of 25 amendments late Wednesday, but Rubio is blocking moving forward until the inclusion of his amendment, which would place more import restrictions on Chinese goods manufactured by Uyghur Muslims in the Xinjiang province of China who are in forced labor camps.

The Senate passed legislation earlier this year that is almost identical to Rubio’s amendment, but the House has not taken up the bill. On Thursday, Rubio said he would not back down and allow the NDAA to move forward until his amendment was included or the House passed similar legislation about the issue.

“I won’t give UC (unanimous consent) to an amendment package that doesn’t include my amendment. That’s my view of it,” Rubio told reporters. “Now, going back to the broader issue, everyone here is in favor of this bill, and everyone here is against slave labor of Uyghur Muslims in Xinjiang, and the only impediment is some House rule because this theoretically raises revenue which it doesn’t, then they should just pass the House version of the bill and send it here.”

Republican Sen. Mike Rounds of South Dakota said Republicans are working to get the bill to the Senate floor later on Thursday or Friday but that they are still trying to negotiate a way forward on the Rubio amendment. “I’m optimistic that we’ve got a couple of paths that we can pursue. We’re hoping that we might have something completed yet today,” Rounds told CNN on Thursday.

But if Rubio maintains his position, the critical piece of legislation will remain stalled, with only two more weeks of in-session legislative days for the Senate before the end of the year.

Democratic Sen. Mazie Hirono of Hawaii, a member of the Armed Services Committee, expressed frustration with the process since Rubio’s amendment had already been passed in a piece of Senate legislation earlier this year.

“Considering that we had already passed that,” referring to Rubio’s amendment, Hirono said she hopes Rubio lifts his objection. “But the circumstance where one person can totally hold up everything is ridiculous.”

Because of the fluctuating debate on the NDAA, a Senate Armed Services Committee confirmation hearing for the next vice chairman of the joint chiefs of staff, the fourth most senior position at the Pentagon, was postponed. Gen. John Hyten, the former vice chairman of the joint chiefs, retired late last month. The position will be vacant until the nominee, Adm. Christopher Grady, can be confirmed.