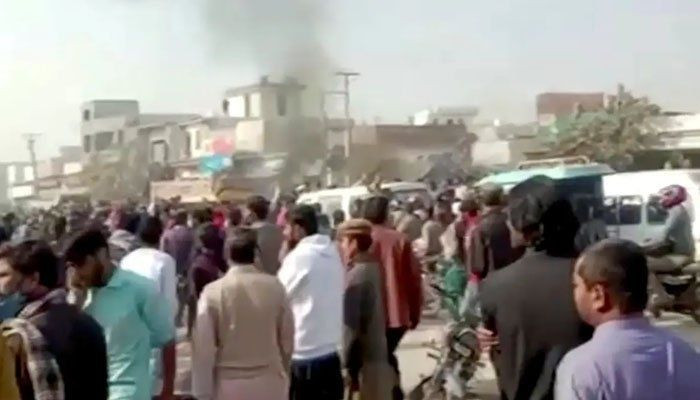 The deceased, Mushtaq Rajput, son of Bashir Ahmed of Chak 12, Khanewal was described by his brother as a middle-aged man who was reportedly suffering from a mental illness.

According to the Punjab police, video footage was used to assist in the identification and arrest of the perpetrators.

Following reports that a man had desecrated the Holy Quran, hundreds of people gathered in Jungle Dera village after Maghrib prayers where Mushtaq was caught by the mob, which started beating him.

According to eyewitness accounts, police arrived on the scene and captured Mushtaq, but he was snatched again by the mob.

After tying him to a tree, the mob beat him up before stoning him to death.

According to eyewitnesses, the victim had been mentally unstable for a long time. His brother told Geo News that Mushtaq had been under the treatment of a retired army doctor for years.

The lynching occurred just 10 weeks after a Sri Lankan national was lynched in Sialkot.

The police conducted 120 raids and apprehended people, according to the IGP, who said that the accused included the key suspects. To identify further suspects, the police would conduct forensic analysis of available footage. Police conducted their secret operation all night on orders from the CM and IGP, and all top police officers remained in the field.

He asked the courts to make decisions in matters like this as soon as possible.

“We have zero tolerance for anyone taking the law into their own hands & mob lynchings will be dealt with full severity of the law. Have asked Punjab IG for report on action taken against perpetrators of the lynching in Mian Channu & against the police who failed in their duty.”

PPP Chairman Bilawal Bhutto Zardari, reacting to the tragedy, said the lynching had once again humiliated the entire nation and tarnished Pakistan’s image.  “Events like the Mian Channu tragedy after the Sialkot are a moment of reflection for us and the government should conduct a transparent investigation into this tragedy and those responsible should be punished. The mob killings are a question mark on the government’s writ,” he added.

He claimed that if violent groups were left uncontrolled, the entire society would be insecure. To put an end to mob killings, he urged for all stakeholders to get on the same page.

“Incidents like Sialkot and Mian Channu lynching are an outcome of the educational system enforced in the country for decades,” Fawad said, adding that the matter is both about the implementation of law and deterioration of society.

The minister warned of major destruction if “reforms are not made on schools, police stations and pulpits level.”

Shireen Mazari, the Federal Minister for Human Rights, stated that the perpetrators would not be spared punishment.

According to Mazari, the Punjab administration was a silent spectator during the tragedy.

The minister took to Twitter to say that rules exist and that police should enforce them rather than allowing mobs to act as they choose.

She also encouraged the provincial administration to take swift action against the police for allowing another incident to occur.

“The mob lynching of a man in Mian Channu is condemnable & cannot be allowed to go unpunished. Punjab govt must immediately take action against the police that watched it happen & the perpetrators. Laws exist – the police must enforce these laws & not allow mobs to rule the day,” Mazari wrote.

The Human Rights Commission of Pakistan (HRCP) said in a statement that the cruelty with which the mob killed its helpless victim — even wresting him from police custody — demonstrates all too well that blasphemy claims have long gone beyond a law-and-order issue. When the government’s own minister dismissed a similar incident as a case of “high emotions,” it’s simply not enough to state the government has a “zero-tolerance” attitude for such culprits.

“The state has consistently pandered to political and religious groups that have never had any qualms about encouraging religious fanaticism. HRCP notes with grave concern a seeming uptick in mob vigilantism and warns the government that, if it does not pushback against fanaticism on all fronts, it is ordinary citizens who will continue to pay the price,” the statement concluded.