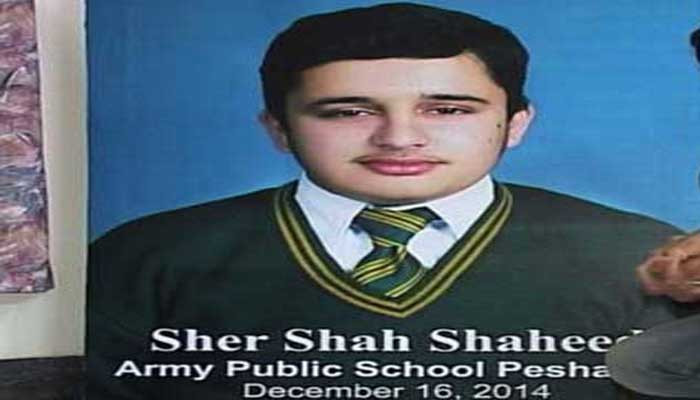 PESHAWAR: One of the 132 children who embraced martyrdom during the tragic Army Public School attack was Sher Shah Khattak, who preferred death to save his injured peers on the ill-fated day of December 16, 2014. A total of 147 people, including 132 schoolchildren were butchered by a group of six armed terrorists in the APS tragedy, known as Pakistan’s 9/11.

It has been seven years since the tragedy but the grief of the parents who lost their children is still the same and might not fade away ever.

The entire country mourned with the parents when they received the blood-stained bodies of their young ones after sending them to a well-guarded school in the heart of Peshawar cantonment.

Most of the students of the army-run school had been assembled by the school administration in the school’s auditorium when the terrorists stormed it. Sher Shah, a handsome and brilliant student of his school, was the elder son of Tufail Khattak, who remained a journalist in the past and is now serving in the Cherat Cement Factory as manager.

His younger brother, Ahmad Shah, was also studying in the same school. The loss Khattak and his family suffered was a huge one that drove them to develop multiple health issues after losing such a lively child.

One thing that motivated Tufail Khattak and his family to honour Sher Shah’s martyrdom was his extraordinary bravery.

Nobody would have known exactly what happened to Sher Shah and other students during the terrorist attack on the school had Col Dr Shaukat Ali Yousafzai not disclosed it. Col Shaukat Ali Yousafzai was then an ENT specialist and held an administrative position in the Combined Military Hospital (CMH), Peshawar, that received a huge number of APS victims.

“Basically, I am an ENT specialist but held an administrative position as well. If you can see that child (pointing towards Sher Shah’s picture), he received four bullets on his chest but when brought to us at the reception in the CMH, he told us, sir please prefer the two other injured students next to me. I couldn’t see any tears in his eyes,” Col Shaukat Ali Yousafzai had explained in a show organised by the Pashto language television channel AVT Khyber.

The show host, Jamshed Ali Khan, to verify further from Col Shaukat Ali, went close to the picture and put a hand on Sher Shah’s photo, prompting the military doctor to say, “yes yes exactly that one.”

“And all the doctors (on duty), all the specialists in CMH, almost one and half hundred, are witness to the fact that the amount of exemplary bravery of this student (Sher Shah) that we saw that day. I have served everywhere and handled casualties in Siachen, the Kargil war and the Line of Control in Kashmir, but never ever in my life, I have seen the type of bravery and courage that this boy (Sher Shah) had,” Col Shaukat Ali Yousafzai shared his memories about Sher Shah Shaheed with a widely attended show, organised by the AVT Khyber for honouring the APS martyrs.

Sher Shah had managed to leave the school auditorium and save his life when the terrorists entered there but he was concerned about his younger brother Ahmad Shah. He desperately searched for his brother outside the auditorium and asked many other fleeing students if they had seen him.

None of them told him about his brother and he got worried and feared that his younger brother might have been trapped inside the auditorium. He returned and went back to the same auditorium where the terrorists were spraying the innocent students with bullets. As revealed by the doctors in CMH Peshawar, Sher Shah had received four bullets on his chest. His parents had named him Sher, a lion, and Shah, a king. He lived like a king and died like a lion.

His loss is irreparable and like many other parents of the APS victims, Sher Shah’s family would never forget such a brave and outstanding son but the way he preferred to die and save others made them proud.

“Sher Shah was my asset like a cash crop and his loss has broken my back. But the way he died has made me proud. I am proud to be the father of a brave and courageous boy like Sher Shah Shaheed,” remarked Tufail Khattak, when he came about an old video clip that comprises excellent remarks by Col Dr Shaukat Ali Yousafzai about Sher Shah.

“I feel proud that sacrifices of our dearest children had given a right direction to the nation and Pakistan launched a much-delayed military action against the terrorists. We can forget the loss of our children for the safety of our people and security of our country if we are assured that no other parents would pass through the same tragedy that we suffered,” he maintained. The parents are still complaining that they had not been heard, even though the government formed a fact-finding judicial commission over the APS incident.

The government had on June 15, 2014 started Zarb-e-Azb military operation against the terrorists in North Waziristan, where militants from all over the world had gathered. The military offensive uprooted the militant groups and many of them went across the border to Afghanistan and started terrorist activities in Pakistan. The APS attack was reportedly planned in Afghanistan. The outlawed Tehreek-e-Taliban Pakistan (TTP) through their spokesman Mohammad Khurasani had claimed responsibility for the APS attack.

It was the only terrorist incident in Pakistan that was publicly condemned by the Afghan Taliban, al-Qaeda, and TTP-Jamaatul Ahrar. Ehsanullah Ehsan was then spokesman of TTP-JA when the terrorists attacked APS and he on behalf of his faction had condemned the brutal killing of schoolchildren. It was after the APS massacre that civil and military leadership conceived the 20-point National Action Plan in January 2015 to curb terrorism.

The moratorium on the death penalty was lifted so that convicted terrorists could be executed and all the political parties in a meeting on December 24, 2014, supported the move to set up military courts.

Ahmad Shah, Sher Shah’s younger brother, in his remarks said, “The relationship between siblings is unique and most genuine. Their love and care for each other are immeasurable. Brothers play many roles in our lives, from the hide-and-seek partner to our adviser. I cannot describe in words how important they are.”