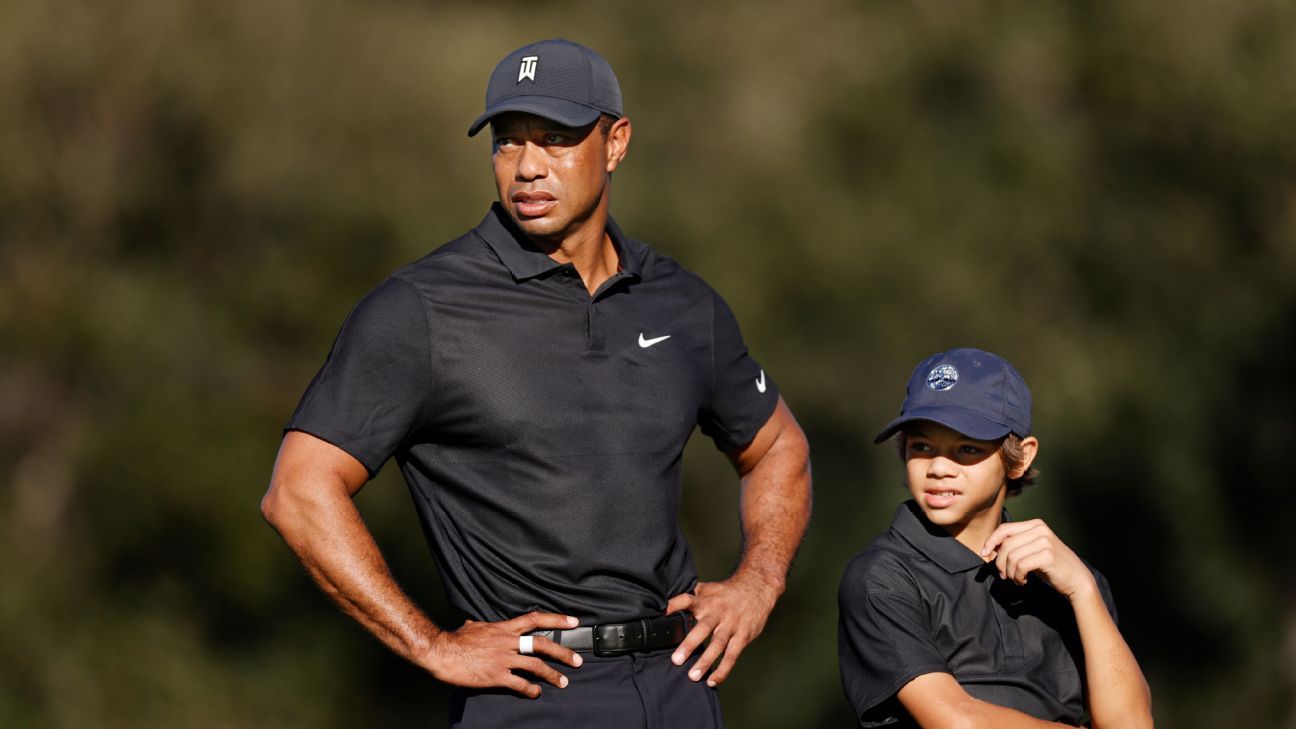 ORLANDO, Fla. — The focus is back where it always burned brightest, on the guy whose various injuries and comebacks have garnered the laser-like attention akin to all the golf records he set.

Tiger Woods was on a golf course again, a crowd of thousands following him in a pro-am. It was amazing to witness, knowing what we know.

A year has rambled by since he last did this, at the same Ritz- Carlton Golf Club where his son, Charlie, then 11 years old and now 12, stole the headlines at the PNC Championship.

Padraig Harrington, the most recent European Ryder Cup captain, who had his battles with Woods throughout the years, is just as curious as the rest of us. He chuckled at the memory of pronouncing at the 2020 event “The Charlie Show.”

“For once, Tiger is not the story,” Harrington said then.

Tiger Woods is now — and that was obvious Friday. Golf Channel wasn’t breaking in to show live pro-am shots were it not for the momentousness of the occasion. Woods was back on a golf course, hitting shots, looking good, nearly 10 months to the day that he was involved in a horrific car crash that could have claimed his life.

The injuries were extensive to his right leg and foot, and only recently has Woods felt good enough to appear in public. For months, he stayed in seclusion, needing a wheelchair. When he finally graduated to crutches, he joked that getting around his mansion in South Florida was more of a chore than he realized.

A few weeks ago, he appeared at his foundation’s Hero World Challenge in the Bahamas, doing his first interviews and proclaiming he had a long way to go — all the while hitting balls on various days at the Albany course, showing there was still some game left.

That he has taken it to this point — even if he is riding in a golf cart — is impressive. The story isn’t so much about Charlie, whose exploits as a now-12-year-old are impressive. And yet, Charlie is the reason Tiger is here.

“Completely,” said Erica Herman, Tiger’s girlfriend. “[Tiger] really wanted to do this for him. It became important to try and do this.”

Herman said that Charlie didn’t so much try to drag his dad to the tournament where they tied for seventh a year ago as remind him how much fun he had. And Tiger, realizing its significance, wanted to make it happen.

We probably will never fully realize that magnitude of the struggle to get here.

Herman joked that when the rest of us have some sort of malady that a doctor asks us to rehabilitate, we are likely to be less-than-committed. Not Tiger Woods.

“He’s worked hard — and it’s been harder than any of the others,” she said, referring to the various comebacks from knee and back issues. “No matter what it was, no matter how small, he did it. Never missed. Did everything.”

Charlie Woods sinks a smooth birdie on the 17th hole, and Tiger appears quite impressed.

That seems right on brand for Woods, whose work ethic and attention to detail throughout his career is part of the legend.

“I think he’s got alien DNA,” said Notah Begay, Woods’ teammate at Stanford and now a Golf Channel analyst. “His ability to repair not only physically but mentally and emotionally is second to none. I don’t think we’ve ever seen anything like it in sports.”

In some ways, Friday appeared to be business as usual. Herman usually never bothers with the pro-ams.

“Are there usually this many people?” she asked.

But she was recruited to help drive the cart and direct traffic. Joe LaCava is here to caddie and Rob McNamara, Tiger’s long-time friend and eyes and ears over the past several years, was with him inside the ropes, discussing the swing and various aspects of the game.

McNamara admitted he had his reservations about doing this, given the struggles that lay ahead and knowing that even walking the short distances between the cart and the greens or tees is still going to take a toll over three days.

But he also acknowledged that it seemed right, that Woods bonding with his son on this stage after nearly year of immense struggle was worth it.

And if you didn’t know what you know … well, a lot of what Woods did during five-plus hours on the course seemed … normal.

Woods has never been fully engaged in pro-ams. He chats up his amateur partners, jokes around with a few stragglers, works on his game but not in any high-intensity manner. That was the case Friday. He practiced his short game around the greens, pitching and chipping to different spots. He did the same on the greens with his putting.

There was some thought he might forego tee shots, but he hit from the back tees — they measure just more than 7,100 yards. And while they didn’t all fly true and far, he had his moments, such on the 11th hole, where his tee shot went 320 yards.

Charlie Woods’ second shot on the 11th comes within an inch of going into the hole for an eagle.

Around the greens, Woods’ short game looked sharp. But let’s face it, that is the aspect he’s been able to work on the most.

One drive got away from him on the ninth hole, a toe-push that elicited some obvious dismay from Woods. As Charlie walked by his dad, the younger Woods quipped: “Nice shot,” which in turn had Tiger firing his tee at Charlie’s back and eliciting a huge laugh.

Woods has been working with a new prototype driver as well as a new golf ball. He unveiled a new device a few weeks ago for swing speed and launch angle work. Clearly, some of this is about him giving some love to his sponsors, who have not been able to benefit this year from the eyeballs he typically draws to everything about him.

But it also shows that Woods is fully engaged in the process. He’s an equipment geek at heart, and loves to test out all of the game’s new toys, a sign he is engaged in this recovery. That he was hitting chip shots from behind the 18th green despite being in some discomfort was another sign.

As the round progressed, Woods hit less shots, a reminder of this daunting process. He said he wanted to save them for the tournament. That makes sense. The weather is quite warm and there is bound to be fatigue.

“For all intents and purposes, nine months hasn’t done his swing any different,” Harrington said. “To him it might feel different, but it doesn’t look any different. Coming back, speed is going to be an issue.”

Don’t underestimate how big of a deal that is for him, an act that is taken for granted but now takes on extra meaning. Woods is going to need some time, perhaps quite a bit more. Four rounds of tournament golf is certainly nothing to be taken for granted, and doing so at the highest competitive level only adds to the stress.

This event should be far from that. It is meant to be low-key, which is nearly impossible when Woods is involved. Hence, the spotlight will be on him again.

But if it weren’t for Charlie, Tiger wouldn’t be here, and an important part of the comeback would be on hold.