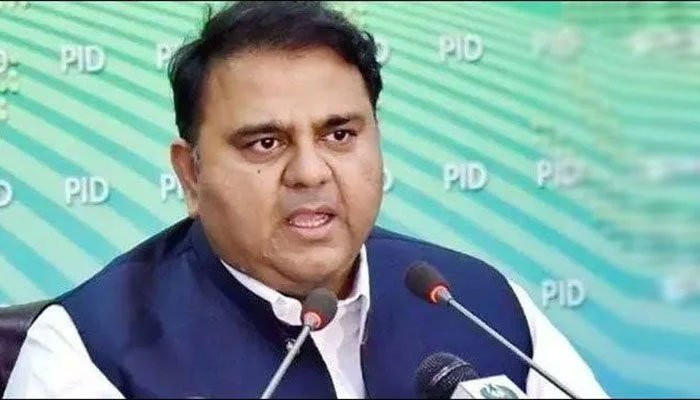 LAHORE: Federal Minister for Information and Technology Chaudhry Fawad Hussain said on Sunday that the state is willing to develop better ties with those who agree to abide by the law, The News reported Monday.

The remark came as Fawad explained the dialogue process with the Tehrik-e-Taliban Pakistan (TTP) while responding to reporters’ questions at a press conference about the death of a policeman in an alleged armed attack on a polio vaccination team by TTP in Khyber Pakhtunkhwa’s Tank district.

He said that the state has a clear policy to deal with parties or groups that have a terrorist or extremist background. He added that the state had no confusion concerning the TLP or any other similar outfits.

“We have fought those who were not willing to comply [with laws] in the past and can do so in future also,” he said.

He claimed that various extremist parties and groups had also been registered with the Election Commission of Pakistan (ECP). He said there were big question marks on various parties’ sources of funding, and there was no record of funding for TLP.

He said the JUI-F also faced serious allegations about its sources of funding. The ECP, he said, should scrutinise and publicise the funding sources of all parties. It should scrutinise the party funding of PPP, PML-N and PTI, besides other registered political parties so that the public can compare and evaluate the parties, he said.

He said that the PTI had submitted a record of more than 40,000 donors consisting of about 22 volumes to the ECP, so that the party funding sources could be publicised.

The minister said that the PML-N had under-valued its assets as it showed the value of a house in F-7 Sector of Islamabad as only Rs27 million, while two transactions of Rs145 million and Rs86.7 million were also made to a PML-N account in 2013, and the source of such transactions to the party account was also unknown. But the PTI had submitted records of each of its donors, even of those who donated one dollar or 10 dollars to the PTI, he added.

Chaudhry said that the PML-N had claimed an office, situated in the F-8 area, Islamabad but it was yet to be ascertained who was paying funds to run financial matters of the office, adding that an audit of PML-N’s Punjab office was not conducted from 2013 to 2015, while a balance of Rs17.5 million was available in its account without the known source of income.

The minister said that Nawaz Sharif had donated 100 million rupees to its party, while out of that donated amount, Rs45 million were returned to Nawaz Sharif so the said method was used for money whitening, adding that a company situated in London, United Kingdom was collecting and arranging funds for the PML-N, but there was still no record of what sources the company was collecting funds from.

Fawad said that there was no information available on PPP’s funding from 2009 to 2012. He said the PPP had opened a source account and deposited Rs420 million into it without apprising the ECP about the source of the amount, and that the party had also showed amounts of Rs3.6 million, Rs3.5 million and Rs2.5 million into its audited account from 2013 to 2015, without mentioning the source of funding.

The PPP had claimed that it spent about Rs230 million during the general elections 2013, but the source was not mentioned, he claimed. The minister said that the PPP, under the control of then Pakistan Ambassador to the United States Hussain Haqqani, had also established a company in the USA which collected funds worth millions of dollars for the PPP without known sources so there should be accountability for all the political parties.

He congratulated the Punjab government on introducing an effective new local government system to decentralise powers at the lower level and said that it was for the first time that mayors’ elections would be held directly in all districts of Punjab and the mayors would have their own empowered cabinet, adding that the new system was aimed to devolve powers to the local representatives to redress people’s issues at the earliest and bring about a change.

He said that Prime Minister Imran Khan fulfilled his promise of introducing a truly empowered local government system, which he made to the people of Pakistan, adding that the Sindh chief minister should focus on his governance matters instead of making indecent and rude statements about the federal government.

The minister said that for the first time since 1964, Karachi was doing federal politics instead of regional. To a question, Fawad said the local government elections could be held through electronic voting machines as Election Commission of Pakistan should issue tender pertaining to the purchase of such machines for inviting various vendors or companies while the purchase process of such machines could be completed within few months.

To another query, the minister said that persistent decrease in inflation rate had been recorded for the last three weeks, adding that the prices of petrol, oil, wheat, lentils and other commodities were lesser in Pakistan compared to other countries in the region.

He said that the government had taken responsibility of bearing the health related expenditures of people under the Sehat Insaf programme, providing a huge relief to people, besides improving their purchase power as now they could utilise such amount for other purposes.

Fawad Chaudhry said the PTI government was striving from the first day in power to resolve the issues of the people of Balochistan.

State Minister for Information and Broadcasting Farrukh Habib said financial matters of all political parties should be made public so that the people could analyse and compare them, adding that the ECP scrutiny committee had examined the accounts and funding details of the PTI but it did not scrutinise accounts of PPP and the PML-N.

He demanded the ECP conduct a scrutiny of the PPP and PML-N accounts under the directions of the Supreme Court of Pakistan. Farrukh said that both PPP and PML-N were trying to hide the facts and account details as once Benazir Bhutto, in her book, had levelled an accusation against Nawaz Sharif that he received funding from foreign elements to derail her government. He said the ECP should hold scrutiny of smaller parties accounts also after the major political parties.

Earlier, it had been reported that a police official was martyred during an armed attack on the polio vaccination team in KP’s Tank district on Sunday.

Tank Deputy Commissioner Kabir Khan Afridi confirmed the reports of the attack saying that some armed men opened fire at a police constable deputed for providing security to the polio vaccination team in Tank’s Shada village.

The constable died on the spot while the assailants managed to escape, Afridi said. This was the second time on the second consecutive day that a polio vaccination team was attacked and a cop was martyred as a result in Tank. Also, it was the second attack allegedly by the Tehrik-e-Taliban Pakistan after it announced ending the ceasefire agreement.