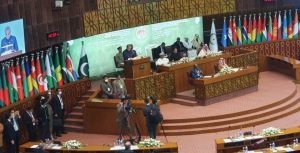 With the membership of 57 states spread across four continents, the Organization of Islamic Cooperation (OIC) is the world’s second-largest organization after the United Nations. The Muslim world’s unified voice is represented through this Organization. It reflects Muslim ideology and works to safeguard and protect the interests of Muslims around the world in the spirit of international peace and harmony. Pakistan has played a vital role in establishing the OIC and has consistently urged Muslim communities to assist one another in times of distress.On 19 December 2021, after 41 years, the 17th extraordinary session of the Council of Foreign Ministers (CFM) of the Organization of Islamic Cooperation (OIC) on Afghanistan was hosted by Pakistan in its capital. The Secretary-General of the Organization of Islamic Cooperation, H.E. Mr. Hissein Ibrahim Taha discussed the Afghanistan Situation with the Prime Minister of the Islamic Republic of Pakistan, Imran Khan. Both talked about the importance of mobilizing efforts to provide support and aid to the Afghan people and to provide urgent assistance to achieve security and stability.
They also discussed the latest developments in the Jammu and Kashmir dispute, as well as the OIC’s efforts to support the Kashmiri people in their fight for fundamental rights, such as the right to self-determination. They highlighted the rise of Islamophobia and the efforts of the OIC and Pakistan to combat the issue. Hissein Brahim Taha, speaking during the joint session, stated that the OIC has always supported the Afghan people and appreciates its member nations in providing humanitarian assistance. It is now more important than ever due to the mounting challenges that the Afghan people confront. He praised Pakistan for hosting this crucial summit and emphasizing the gravity of the situation.
Pakistan quoted the horrendous consequences for the international community if Afghanistan’s economic meltdown continued. Prime Minister Imran Khan also mentioned, that if the world doesn’t act, this will be the biggest man-made crisis. Shah Mehmood Qureshi, the Foreign Minister of Pakistan has proposed the six-point plan, which addresses Afghanistan’s humanitarian crisis, food security, and economic development besides its institutional capacity building to fight the threat of terrorism.
The OIC has agreed to establish a humanitarian trust fund for Afghanistan as a result of this summit. The forum also agreed to start a food security program for Afghanistan’s citizens. Around 70 delegations from member states, foreign aid agencies, and special officials attended the summit.
Afghanistan, a war-torn country is struggling with drought and severe poverty right now. It is the time for Muslim ummah and also the international community to step forward to help the country that is going through difficult times. Politics should be kept aside when it comes to humanity. We hope that the members of the OIC would quickly find a common ground to assist Afghans in escaping the present humanitarian catastrophe.