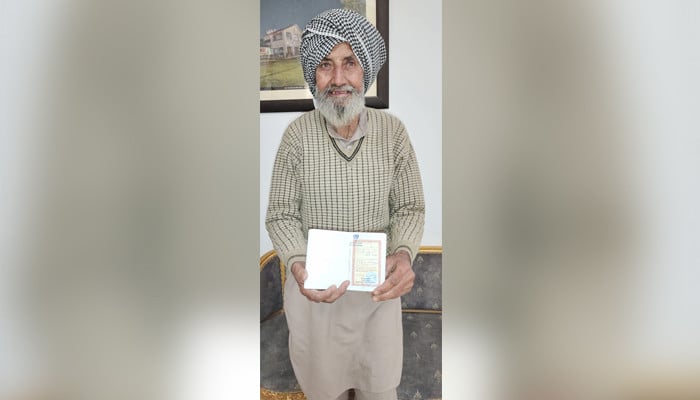 ISLAMABAD: If there is political will, even the impossible could become possible between Pakistan and India as far as people-to-people contact is concerned. This became evident on Friday, especially at a time when bilateral relations are at an all-time low.

First, while visas for citizens of both countries are very difficult to acquire, Pakistan issued a visa to an Indian national who had not met his brother for 74 years. Later, India announced that it was prepared to engage with Pakistan to increase the number of shrines visits and modes of travel between pilgrims on both sides.

The Pakistan High Commission on Friday issued a visa to Indian national Sika Khan to visit Pakistan and meet his family.

Recently, Sika Khan had reunited with his brother Muhammed Siddique at the visa-free Kartarpur Sahib Corridor, after 74 years as they had been separated in 1947 during Partition.

Meanwhile, the Indian Ministry of External Affairs (MEA) announced that India maintains a positive approach on the matter and is willing to engage with Pakistan on it.

The Protocol on Visits to Religious Shrines 1974 is a bilateral agreement between India and Pakistan facilitating Indian and Pakistani nationals to visit certain religious shrines in both countries.

In November 2018, 15 locations in Pakistan and five in India were covered under this protocol.

MEA spokesperson Arindam Bagchi said: “As you are aware, under the 1974 Protocol between India and Pakistan, visits to religious shrines are being facilitated regularly. There is an interest on both sides to expand the agreed list of shrines and the mode of travel. It naturally needs to be discussed under the protocol”.

However, he added that currently, restrictions are in place on movement and gatherings in view of the COVID-19 pandemic.

“As the situation normalises, we expect that this time can be utilised to hold discussions under the bilateral Protocol. It is our hope to facilitate the early exchange of visits to all shrines of interest to pilgrims,” he said.

However, on IOJ&K, Pakistan once again strongly urged the members of the international community to hold India to account for its atrocities in IOJ&K and to play their due role in enabling the Kashmiris to exercise their inalienable right to self-determination as pledged to them under the relevant UN Security Council resolutions.

“Peace and development in South Asia must no longer be held hostage to India’s irresponsible and reckless approach.

The world is increasingly aware of the grave situation in IIOJ&K. Let India be warned that its reign of terror and illegal actions cannot continue unchecked”, said the spokesman at the Foreign Office during the weekly media briefing.

He added that it is a matter of grave concern that India continues to commit widespread and gross human rights violations in IIOJ&K with impunity.

“These gruesome acts are well-documented by the UN and international human rights organisations. On various occasions, Pakistan has also presented to the UN and the international community evidence of war crimes and crimes against humanity being perpetrated by the Indian occupation forces in IIOJ&K,” he pointed out.

“For over seventy years, India has violated the UN Charter and fundamental principles, norms and rules of international law. On Jammu and Kashmir for example, by refusing to implement the UNSC resolutions, India remains in consistent breach of its obligations under Article 25 of the UN Charter that stipulates that “The Members of the United Nations agree to accept and carry out the decisions of the Security Council”, said the spokesman.