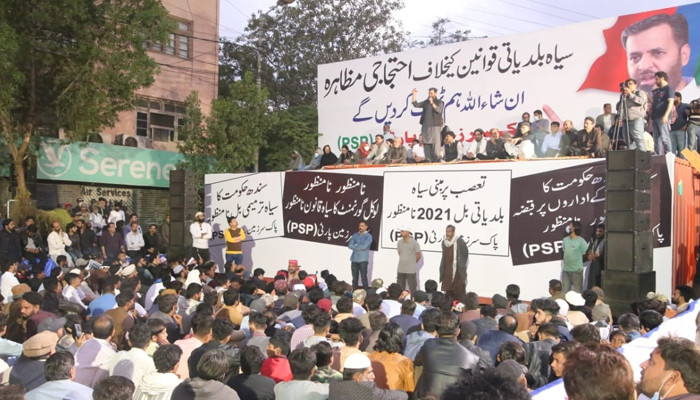 KARACHI: The Pak Sarzameen Party (PSP) on Saturday announced to stage a sit-in against the Sindh Local Government Act 2021, two days after the JI had ended its 29-day-long dharna over the same law.

PSP Chairman Mustafa Kamal made the announcement during a rally, which he had called against the controversial law. Scores of party workers and supporters had reached Fawara Chowk on his call.

“We have decided to not stage a protest outside the Chief Minister House. We will now stage a sit-in here. I will continue the sit-in even if I am left alone,” Kamal said, who has also served as Karachi’s mayor in the past.

Kamal claimed a Sindh government delegation had accepted 70% of his demands a week earlier, but it was not enough. “This is not a matter of my ego, this is an issue of right and wrong.”

The PSP chairman said he would “force the Sindh government to accept all the lawful demands which would benefit the masses and the country.”

He told the rally’s participants that they would have to continue the sit-in “till the government meets their demands” and told them he brought his pillow and mattress along with him.

After this, he spread his mattress and sat on it; turning the rally into a protest.

The sit-in has been staged near Fawara Chowk.

According to the traffic police, Din Muhammad Wafai Road has been closed for traffic due to the sit-in.

The JI had on Friday announced to call off the sit-in after almost a month in Karachi as the negotiations with the Sindh government bore fruit in connection with the law governing the local governments.