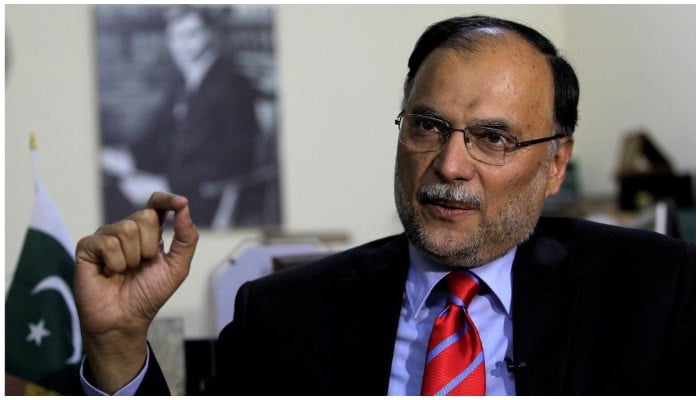 NAROWAL: PML-N Secretary-General Ahsan Iqbal on Sunday slammed the PTI government for “talking about the extension of the army chief’s tenure before the right time” and called it another “political tactic,” Geo News reported.

Speaking to journalists in Narowal, Iqbal said that “a new military chief is appointed during the last three months of the incumbent’s tenure, therefore, talking about the extension before time is just a political tactic.”

He further said that the government is “trying to play a dangerous political card on the matter of the army chief’s appointment” adding that it is a “condemnable act.”

Iqbal also spoke about the Murree disaster and said that instead of taking preventative measures, the PTI-led government was “busy applauding the increase in tourism there”.

The PML-N leader said that neither the government nor the Murree administration could be seen in action when heavy snowstorms left more than 20 people dead as they ended up being stranded in their cars on the roads.

“Despite an alert being issued regarding the weather situation in Murree, the government was busy praising the uptick in tourism there,” he said.

He said that tourists were stuck in a snowstorm but the provincial government was busy with matters related to the PTI’s organisation in Lahore.

“The government was blaming tourists in a careless, ignorant, and sarcastic manner [for its own shortcomings]” he added. “The government thinks that by running trends on social media, it is fulfilling its responsibilities.”

Shedding light on the economic condition of the country, Ahsan Iqbal said that the “agreement with the International Monetary Fund (IMF) is a reflection of the government’s incompetency and failure.”

He also said that if allied parties keep standing with the government, the public will consider them equally responsible for the regime’s failure to deliver its promises.

He also briefly talked about the foreign funding case of the PTI government and said that ever since the Election Commission of Pakistan (ECP) has released its inquiry report — in which it was revealed that the PTI failed to declare millions of rupees — “Imran Khan’s reality has been exposed and he will have to answer the masses for his corruption.”