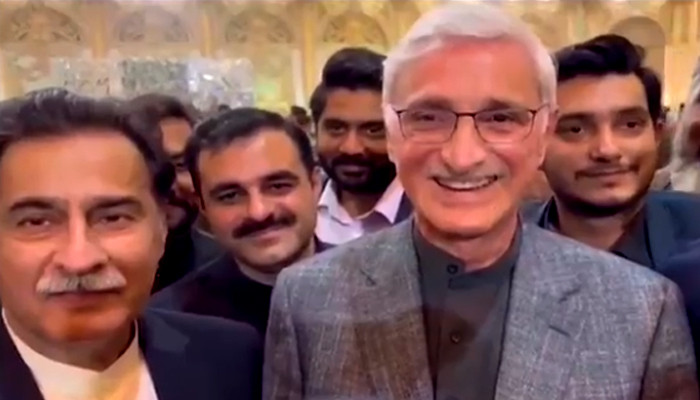 “An airplane can go in every direction,” PTI stalwart Jahangir Tareen said  while standing beside PML-N leader Ayaz Sadiq in a video that was the talk of the town on Friday.

Tareen was attending a dinner reception the night prior hosted by PML-N leader Khawaja Saad Rafique on the occasion of his daughter’s wedding.

When asked by a reporter to comment on his presence at the event, given the rivalry between the PTI and the PML-N, Tareen said he has a “very old friendship” with Rafique, which “will always remain”.

The reporter then asked whether “the plane” — a euphemism for Tareen himself — will ever switch its trajectory to “this direction” — a reference to the PML-N, given the gathering he was in. This prompted laughter from Tareen.

Sadiq interjected to tell the reporter: “Why do you think he is smiling?”

When Tareen finally responded, he was still all smiles, and said: “The thing is, I am here to attend a wedding, to share in the joy of this occasion. We will see what happens next, InshaAllah. What will happen, will happen.”

The reporter persisted, asking again: “But can the plane ever switch directions?”

At this, Tareen, while walking ahead in a bid to get away, chuckled and said: “A plane can go in every direction.”

Sadiq, standing right beside Tareen, said to the reporter once more: “He [Tareen] is smiling.”

The PML-N leader said that it will be good for the country “if everyone continues to smile with the exception of Imran Khan”.