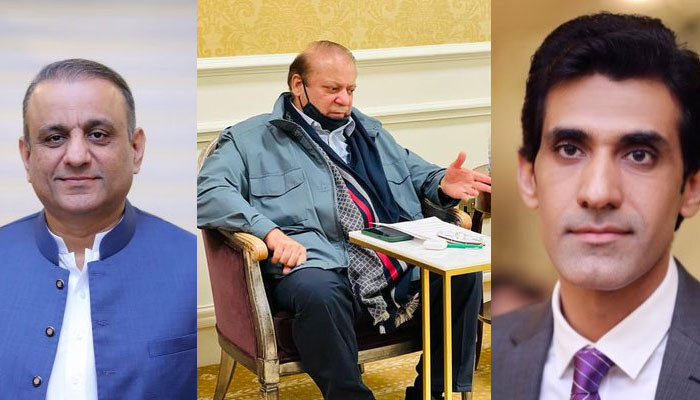 Aleem Khan didn’t talk to the media and left after the meeting. Refusing to reveal anything about the meeting, Aleem Khan said, “I will avoid talking about politics.”

“Let’s talk about the weather. The weather in London will not have any impact on the politics in Pakistan.”

Talking to the media after the two-hour meeting, Aoun Chaudhry, the PM’s advisor on sports and tourism, said that Pakistan needs Nawaz Sharif at this critical juncture. He said the nation would hear good news very soon.

“Don’t ask me anything today. We pray that Nawaz Sharif comes to Pakistan soon,” he told the media.

The Punjab government will crumble under its own weight, he said.

In his meeting with the PML-N chief, Aoun Chaudhry informed Nawaz about the number of PML-N members needed to kick-start a change in Punjab. The two discussed matters regarding the Centre and Punjab.

The advisor will leave for Pakistan today, carrying some important instructions from Nawaz Sharif.

Chaudhry also briefed Nawaz on the government’s measures related to the rehabilitation of flood victims and the control of inflation.