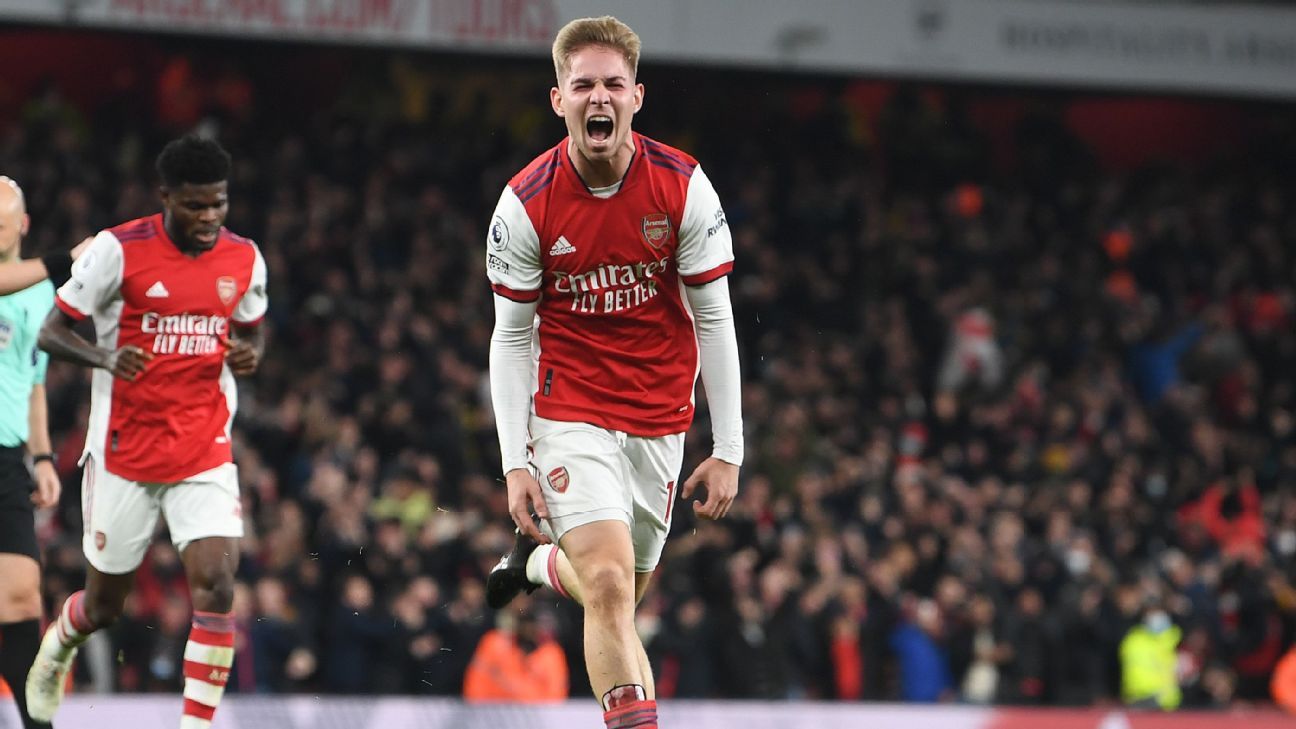 LONDON — The pre-match message was for Pierre-Emerick Aubameyang but we know now he wasn’t the only one listening.

Mikel Arteta’s decision to strip Aubameyang of the captaincy dominated the build-up to Arsenal‘s game against West Ham United on Wednesday and could have had divisive effect given the striker’s popularity within the squad. Yet it had the opposite impact, galvanising this young group to produce one of their most complete performances of the season to earn a 2-0 win, climb into the top four and offer an exciting glimpse of what life without Aubameyang could resemble.

“They were fully focused,” said Arteta after the match. “They wanted to show how strong we are as a team. The performance, the attitude and the commitment they showed today is exactly what we are as a club.

“I expect it from every player: to stick to our values. We will talk about that another day. Today I want to talk about the game.”

– Whoever next Arsenal captain is, history says it won’t be for long
– Stream ESPN FC Daily on ESPN+ (U.S. only)
– Don’t have ESPN? Get instant access

There was a time not too long ago when Aubameyang was carrying a disjointed Arsenal team on his shoulders. Arteta’s predecessor Unai Emery would almost certainly have been sacked earlier than November 2019 had Aubameyang not been so prolific in front of goal to that point.

Yet after a series of disciplinary issues and a loss of form, Arteta demoted the 32-year-old on Tuesday citing a lack of “commitment and passion” in addition to “certain moments where he has not fulfilled his duties.”

Commitment and passion were in abundance on Wednesday. The Emirates Stadium crowd can sometimes be an unforgiving bunch, but they responded to the application on show, Arsenal pressing West Ham relentlessly into mistakes in a breathless first half that somehow ended without a goal at either end.

Aubameyang’s willingness to press has often been questioned, but Gabriel Martinelli, Alexandre Lacazette and Bukayo Saka led from the front in that regard.

And Martinelli’s 48th-minute opening goal bore more than a passing resemblance to Aubameyang in his pomp, drifting in off the left to collect Lacazette’s pass before curling a right-footed shot past former Arsenal goalkeeper Lukasz Fabianski. There were even hallmarks of Thierry Henry about the way Martinelli opened his body up to finish clinically but, hey, one step at a time.

Proving a reliable replacement for Aubameyang would be a hugely valuable place to start for Martinelli. A bundle of energy with and without the ball, the 20-year-old made four tackles — only outdone by the excellent Lacazette (five) — Martinelli’s seventh Premier League goal makes him the most prolific Brazilian prior to the age of 21 in the league’s history behind Manchester City‘s Gabriel Jesus (16).

“Certainly it was one of [his best performances] in every aspect of the game,” Arteta said of Martinelli. “Physically he is growing. He was cramping again and he needs to mature in that sense as well.

“But his overall understanding of the game is getting much better, he is able to put some gears into his play, instead of sometimes doing everything 100 mph. The energy and the quality he shows at times is top.”

Anything less than a win on this night would have brought Arteta’s authority into question and placed pressure on the Spaniard to find a way back into the team for Aubameyang, who has scored 58 Premier League goals since the start of the 2018-19 season. Instead, this game felt similar to mid-March, when Arteta dropped Aubameyang at the last minute after the Gabon international reported late for a team meeting on the day of the north London derby and his team responded with an impressive 2-1 win in a performance of similar vigour.

However, what came next can offer an important history lesson. The Gunners won two of the next nine in all competitions, a run that brought the sensibility of Aubameyang’s peripheral role under renewed examination.

This time, they face Leeds United next — hammered 7-0 by Manchester City on Tuesday — Sunderland in a Carabao Cup quarterfinal, Norwich City and then Wolverhampton Wanderers before New Year’s Day. It is an inviting programme that offers the chance to generate further momentum and shift the emphasis on Aubameyang to match the focus and diligence around him if he is to revive his fortunes in north London.

Despite Arsenal’s dominance, the game was not safe until the very end. The home side benefitted from a soft penalty decision as Vladimir Coufal appeared to win the ball from Lacazette with a tackle in the box, although it was notable afterwards that West Ham boss David Moyes suggested the defender should have been more decisive in his challenge.

Lacazette missed the resulting spot kick — the third Premier League penalty in a row Arsenal have squandered — but the damage was still profound for the Hammers given Coufal’s sending off for the offence and the resulting numerical disadvantage.

Substitute Emile Smith Rowe finally killed off the visitors three minutes from time with another excellent finish, wrongfooting Fabianski with a left-footed shot from Saka’s pass. It was the tenth league goal Arsenal have scored by a player aged 21 or younger, the highest number achieved by any team this season.

The furore over Aubameyang overshadowed the importance of this game beforehand given the Hammers’ fine form under Moyes and the somewhat fragile progress being made by Arteta’s Arsenal. It is also worth remembering that Aubameyang was initially made captain after winning a player’s vote. His popularity is such that a poor performance would have been interpreted as signs of discontent at one of Arteta’s boldest decisions in his managerial career to date.

Instead, they delivered one of their best displays of the season. They responded to Arteta’s call. Time will tell if that continues — and whether Aubameyang can do the same.