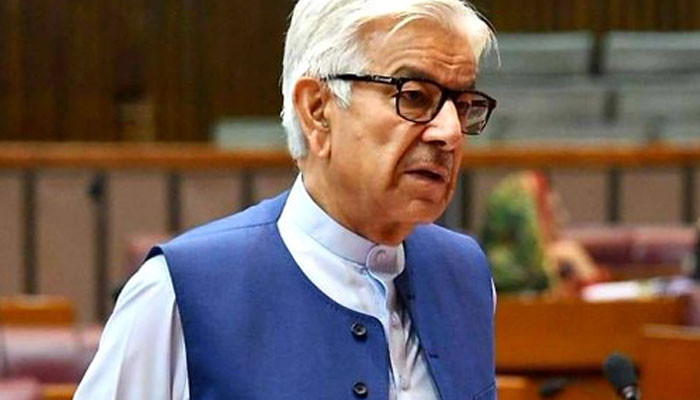 Federal Defence Minister Khawaja Asif condemned Chairman PTI Imran Khan over his statement regarding the appointment of the next army chief and said that the new army chief would be appointed from among the top five generals.

In a public rally in Faisalabad on Sunday, the PTI chief criticised the government, saying that it was delaying the elections to appoint an army chief of its choice and that if a “patriotic chief of army staff comes in, he will not spare the incumbent rulers.”

Since then, the former prime minister is under fire for targeting the Pakistan Army.

“The government will not deviate from this principle [of the army chief’s appointment]. The Prime Minister of Pakistan makes the appointment in consultation with the institution,” the PML-N leader said while speaking in the Geo News programme “Aaj Shahzeb Khanzada Kay Sath” on Monday.

Khawaja Asif said that Imran Khan’s statement at the Faisalabad rally is the second instalment of his aide Shahbaz Gill’s statement.

He said that Shahbaz Gill, through his statement aired on a private news channel, tried to create conflict among the rank and file of the Pakistan Army.

But this time around, Imran Khan himself launched the second episode and tried to create rifts among five or six three-star generals of the army, he pointed out.

It was in the Zulfikar Ali Bhutto regime that General Ziaul Haq was appointed from the eleventh or twelfth position, he added.

“Imran Khan has proved time and again to be an unguided missile for the country, its economy, politics and social cohesion,” Bilawal said, urging the PTI chairman to desist from questioning the patriotism of the defence institution and its commanders.

Bilawal said, “Targeting senior officials and handing out certificates of patriotism and treason to the members of different state institutions have been hallmarks of this anarchist.”

Meanwhile, Maryam called the PTI chief a “double-dealer.” She said that Pakistan will “continue to go downhill if he’s [Khan] not declared and dealt with as a double-dealer by all the stakeholders including the judiciary.”

She further added that Khan should not be treated as a “political leader” because he’s not.

“He has been launched and funded to wreck and ruin Pakistan and plunge the nation into pits of misery and despair,” she wrote on Twitter, adding that he has waged a war on our country by attacking its stability, economy, society, media and now its armed forces.

On September 4, the PTI chairman said the coalition government wanted to “appoint an army chief of their own choice” therefore it was stalling the elections.

The PTI chairman said that PPP Co-chairman Asif Ali Zardari and former premier Nawaz Sharif “feared” a strong and patriotic army chief, who could hold them accountable for the looted money they had stashed abroad.

The former prime minister said a new army chief was going to be appointed in November this year. They [Zaradri and Nawaz] wanted to appoint a favourite [general] as the next army chief, he said.

Both have committed corruption worth billions, and they wanted to appoint an army chief who could protect them and their corruption, Imran Khan alleged.

The PTI chair alleged that PM Shehbaz, his brother Nawaz, and Zardari had been laundering public money. The two families had been looting the national exchequer for the last 30 years, he said.

The Pakistani Army expressed displeasure over Imran Khan’s statement against the military and said it was “aghast” over it.

In a statement, the Inter-Services Public Relations (ISPR) said that the army was “aghast” at the defamatory and uncalled-for statements about the military’s senior leadership made by the PTI chairman during a Faisalabad rally.

The military’s media wing said that regrettably, an attempt was made to discredit and undermine the senior leadership of the army at a time when the institution was laying lives for the “security and safety of the people every day”.

The army said that senior politicians trying to stir controversies over the appointment of the COAS, the procedure for which is well-defined in the Constitution, is “most unfortunate and disappointing”.