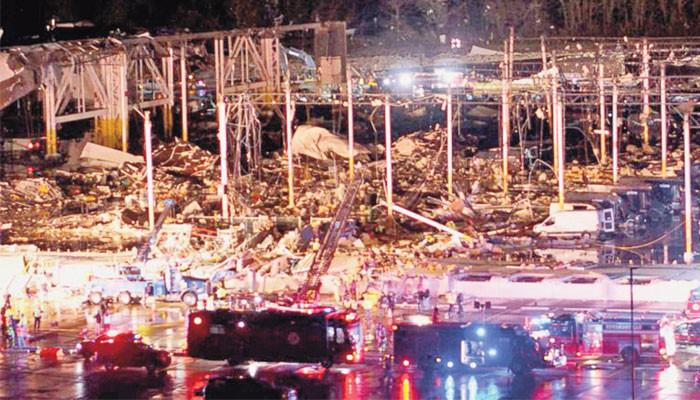 MAYFIELD: Dozens of devastating tornadoes ripped through the Midwest and the southeastern US overnight involving six US states overnight, leaving more than 70 people dead Saturday in Kentucky — many of them workers at a candle factory — and inflicting deadly damage at a sprawling Amazon warehouse in Illinois. Police and fire stations in Mayfield, Kentucky, destroyed by tornado. Gov. Andy Beshear said in a press conference Saturday morning, adding “it may, in fact, exceed 100 before the day is done.”

The western Kentucky town of Mayfield was “ground zero” of the storm — a scene of “massive devastation,” one official said early Saturday. The city of Mayfield, Kentucky, is putting a curfew in place beginning at 7 p.m. ET, Police Chief Nathan Kent said at a news conference Saturday. A CNN Weather analysis of warning data shows that residents of Mayfield, Kentucky, received more than 20 minutes of lead time before the tornado struck.Entire city blocks there were flattened, with historic houses and buildings ripped apart, and twisted metal, shattered tree limbs and chunks of brick strewn across streets.“It is indescribable — the level of devastation is unlike anything I have ever seen,” Kentucky governor Andy Beshear said after rushing to Mayfield. “This will be, I believe, the deadliest tornado system to ever run through Kentucky.” Beshear said it was clear that the death toll in his state was already “north of 70” and could end up “exceeding 100 before the day is done.” Referring to the candle factory, where a roof collapsed, he said: “We´re going to lose a lot of lives in that facility. It´s a very dire situation.”

Reports put the total number of tornadoes across the region at around 30, and at least eight people were killed in other storm-hit states, including two at the Amazon facility in Illinois.

In Arkansas, at least one person died when a tornado “pretty much destroyed” a nursing home in Monette, a county official said. Another person died elsewhere in the state. Three people died in Tennessee, according to local authorities quoted by the news media, while one died in Missouri, as the region was hammered by some of the most powerful tornadoes to hit the area in years.

President Joe Biden said the massive storm system had inflicted an “unimaginable tragedy” on the area, and vowed to provide all needed federal aid. The American Red Cross said it was working to provide relief across all five states and noted a continued threat of more severe weather.

“It looks like a bomb has exploded in our community,” 31-year-old Mayfield resident Alex Goodman told AFP. “The sheer force of the wind and the rain was incredible.”

“We live in a very historic community and all our downtown history is gone,” she said. The tornado that smashed through Mayfield had rumbled along the ground for over 200 miles in Kentucky and for 227 miles overall, Beshear said.

Previously, the longest a US tornado has ever tracked along the ground was a 219-mile storm in Missouri in 1925. Powerful and devastating — as such long-track storms tend to be — it claimed 695 lives.

Images of the latest tornadoes from US news channels showed dark black cylinders sweeping across the ground, illuminated by intermittent flashes of lightning.

The governor declared a state of emergency and said scores of search and rescue officials had been deployed along with the national guard. Around 275,000 homes in the region were left without power, according to PowerOutage.com.

When another tornado hit an Amazon warehouse in the southern Illinois city of Edwardsville, reducing much of it to rubble, around 100 workers were trapped inside, said police quoted by local media.

Hundreds of workers scrambled to rescue the trapped or injured employees, who were on the night shift processing orders ahead of the Christmas holidays. Two died, local media reported.

In a statement, Amazon spokesperson Richard Rocha said its workers´ safety was the company´s “top priority,” adding, “We´re assessing the situation and will share additional information when it´s available.”

In Arkansas, some 20 people were trapped after a tornado struck the Monette Manor nursing home, US media reported. Craighead county official Marvin Day told local news channels that those trapped had been rescued but that the structure was “pretty much destroyed.”

Scientists have warned that climate change is making storms more powerful and increasing their frequency, posing a growing threat to areas where extreme weather events are already common.

Tornado outbreaks in this region are rare in December, however, according to Sam Shamburger, the lead NWS forecaster in Nashville, Tennessee. The La Nina weather phenomenon may be aggravating normal weather patterns, he said. “We could see even more of these severe weather-type systems even during the winter months, December, January, February,” Tennessee news channel WKRN quoted him as saying. “Stay alert over the next few months.”