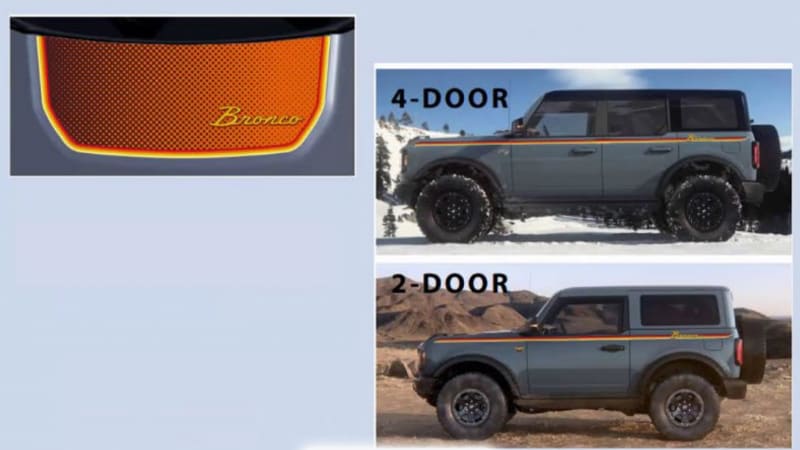 Ford will offer more than 300 factory-developed or factory-authorized accessories for the 2021 Bronco. Pricing emerged earlier in 2021, and the first images showing some of the add-ons have now been released online.

Well-informed enthusiast forum Bronco6G obtained and published what looks like slides from an internal presentation (pictured). They show some of the accessories that buyers will be able to purchase when Bronco deliveries begin later in 2021. There are several types of fender flares, including a few created by aftermarket companies like Bushwacker. If they look a little bit silly in the photos, keep in mind that they were designed to cover aftermarket wheels and tires that will often be bigger than the stock setup shown in most of the images.

Retractable tops are available for the two- and four-door variants. Interestingly, some of the power-operated tops have a slanted rear window instead of the upright one the Bronco comes standard with. Skid plates, rock rails, trail armor, and mud flaps are available, too, as are various storage solutions for the cargo compartment.

Customers who want to personalize their Bronco have a growing selection of decals to choose from. One adds stickers showing a map to the hood and to the bottom of the doors, while another brings black, dark gray, and light gray stripes accented by the SUV’s name. Our favorite set of decals adds a retro touch with a sunburst insert on the hood, right below the windshield, and a matching stripe that runs below the belt line on both sides.

Once you’ve customized the front and the sides, you can move on to the rear end by choosing from one of several soft spare tire cover designs. Alternatively, dealers can order a cover with their name and logo on it.

If you want to eat in your Bronco, there’s a Tuffy swing gate that attaches to the tailgate. If you want to rock out, there’s a non-amplified sound bar built by JLB. If you want peace and quiet, there’s a headliner kit you can add to lower the decibels in the cabin. Ford ensured that there’s something for nearly everyone in the catalog.

Official details about the Bronco’s available accessories will emerge closer to the start of production. And, fear not if nothing catches your eye. Aftermarket tuners will create hundreds (if not thousands) of accessories for the born-again off-roader, much like they have for the Jeep Wrangler, the Bronco’s most direct rival.