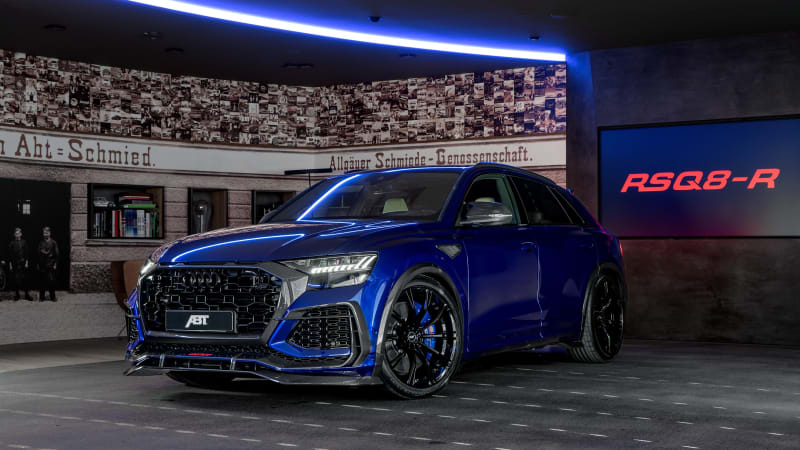 Audi crowned its range of SUVs with the RS Q8, a high-performance people-hauler that’s as fast as it is luxurious. Its 3.7-second sprint to 60 mph is quick enough for most, but German tuner ABT saw room for improvement. It celebrated its 125th birthday by building an RS Q8 that’s nearly as speedy to 60 mph as an R8.

ABT kept the twin-turbocharged, 4.0-liter V8, which produces 591 horsepower and 590 pound-feet of torque. It increased those figures to 740 and 679, respectively, largely through software tweaks; it made no internal modifications to the engine. Injecting 140 horses into the driveline reduces the R’s zero-to-62-mph time to 3.4 seconds, meaning its zero-to-60-mph time could check in at 3.3 seconds. For context, the R8 sprints to 60 mph in 3.2 seconds, while the standard RS Q8 takes 3.7 seconds. Motorists planning on storming the unrestricted sections of the autobahn can cruise at 195 mph after ABT removes the speed limiter.

Making a wolf in sheep’s clothing wasn’t ABT’s intention. It gave the RS Q8-R a body kit that includes several carbon fiber bits, and it installed a set of 23-inch wheels. Buyers who prefer a more subtle look (or something even louder) can work directly with ABT’s design department to customize nearly all of the add-ons. Inside, there’s an additional dose of carbon fiber and sport seats for the front passengers, among other modifications.

125 units of the RS Q8-R will be built, a number chosen because ABT was founded 125 years ago. It wasn’t tuning steam-powered cars and two-horsepower quadricycles; it was formed as a horseshoe manufacturer.

Pricing information hasn’t been released yet, but we’ll hear more about the RS Q8-R in the coming months. The tuner hinted that the power hike will allow it to easily beat Audi’s 2019 Nürburgring record, which stands at seven minutes and 42 seconds. ABT’s R won’t dethrone the RS Q8, the record set is for production SUVs and it’s a limited-edition model, but we’re looking forward to finding out how many seconds it can shave from that time.

Previouse Post :« Is Dest as good at Barcelona as USMNT fans had hoped? The numbers suggest the answer is ‘yes’