COUGAR, Wash. – Somewhere in the mountains south of Mount St. Helens, there is a serpentine road with sharp twists and scenic sweepers. It’s lined by dense ferns with conifers overhead, and it’s almost certainly damp. Then, at some point, there’s a large turnout that provides a vast, unencumbered view of the infamous stratovolcano — the side that was less blown up in 1980.

Unfortunately, I’m not sure where that “somewhere” is. It’s a distant memory, but if I was ever going to find it again, a Chevrolet Corvette Convertible seemed like the perfect tool. Sure, it was February, but the ‘Vette was wearing winter tires. What could go wrong? You see, I first stumbled upon that road and lookout in late 2009 during the Suzuki Kizashi press launch. Probably not a car you expected to be referenced in a Corvette review, but there it is! The road in question provided a challenging tableau for the agile little sedan, while that lookout served as a scenic driver change point complete with a box of Voodoo Doughnuts the Suzuki reps brought along to fatten us up. I have since had my share of Tangfastics and Maple Creams, but that road has remained a mystery despite my move to Portland three-plus years ago.

V8 fired up, the exhaust’s deep, nasty rumble is regrettably far more noticeable outside the Corvette than inside – something I noted a year ago in the C8 first drive review. This would be a point in favor of the Corvette Convertible’s retractable hardtop roof. Though I planned to eventually put it down in order to enjoy that V8 music and satisfy the requirements of reviewing a convertible, temperatures were in still in the 40s with rain always possible. Pushing a button to restore the roof is a much better solution than what you get with the Corvette Coupe’s removable roof panel: get out of the car, open the trunk, pull out the roof panel, awkwardly put roof panel on car … you get the idea. Yay Convertible. Well, except for the diminished headroom. I managed to wear a helmet in the coupe back in February 2020, but no way is that possible in the Convertible. I couldn’t wear a baseball cap without the button hitting the rigid panel above me, and although 6-foot-3, it’s rare for me to come in contact with a car’s roof.

The most obvious candidate to be the Kizashi road is Washington Highway 503. It runs from Interstate 5 eastward into the mountains south of St. Helens with no other roads in between. At its eastern end, it forks in multiple directions, including south toward the Columbia River Gorge. I planned to take that and loop back to Portland on Washington 14. You can see the route here.

But first, getting to 503 requires a straight shot up Interstate 5 for 40 minutes. This C8 Convertible (as tested $88,805) came with Magnetic Ride Control, a $1,895 option available with or without this car’s $5,000 Z51 Performance pack. It’s a must-have. As much as these magnetically controlled dampers might help conquer mountain roads and race tracks, they’re even more indispensable for their ability to smooth out trash pavement and provide a truly civilized highway ride. In fact, having already judged the ride to be shockingly comfortable, I discovered upon exiting onto Washington 503 that I had actually been driving in Sport mode the entire time. Admittedly, the differences between Tour and Sport modes are more obvious in terms of steering, but still, that’s impressive. 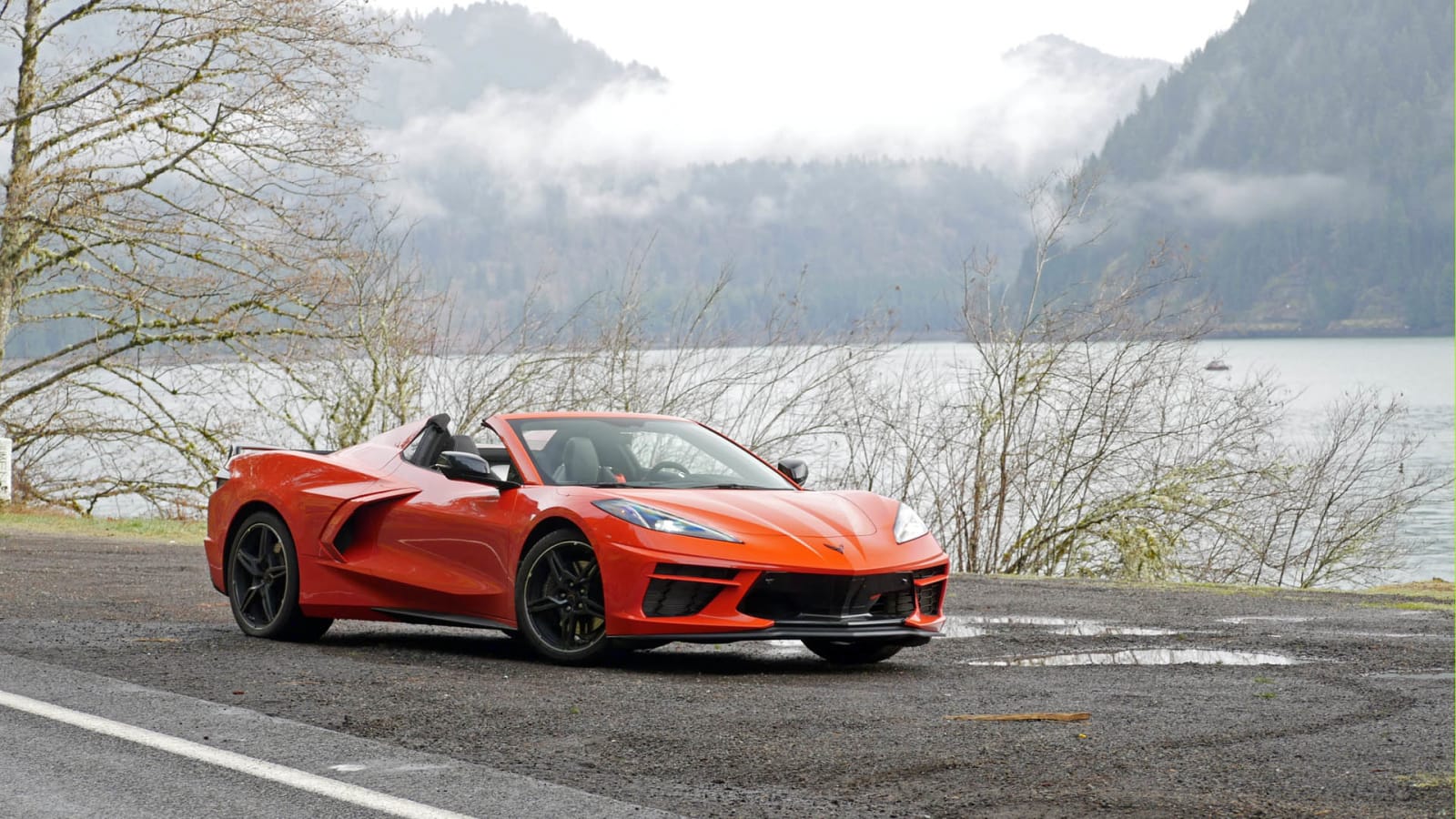 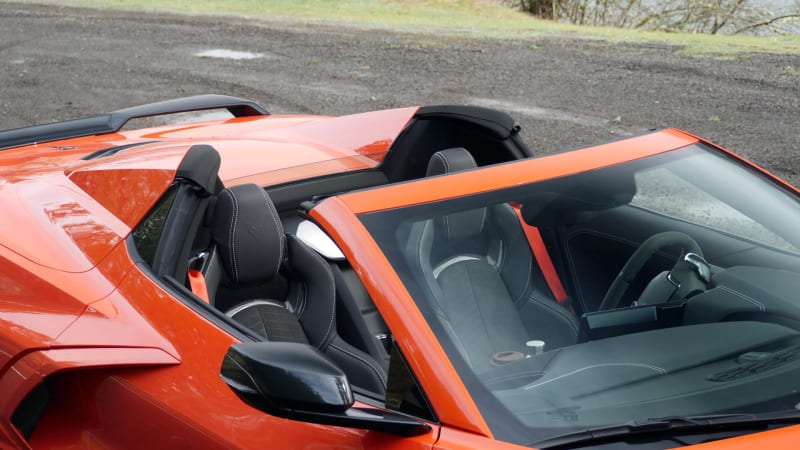 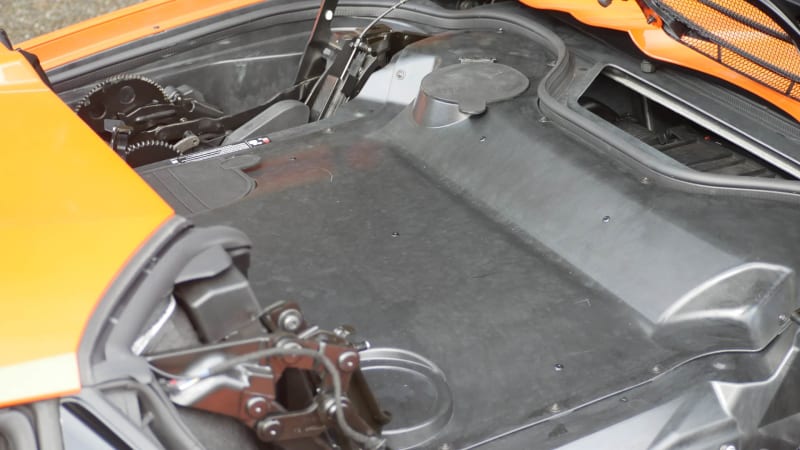 After about 15 minutes, 503 starts skirting a spectacular trio of lakes. The first, Lake Merwin, does a decent impression of a fjord. It’s here where I lowered the roof, a hardtop piece that lifts up and disappears below a solid clamshell panel. The rear window is a separate roll-down element that doubles as a wind deflector with the roof down. It does a competent job on that front, significantly reducing cabin airflow while driving in the 50- to 60-mph range. However, there’s still quite a lot of noise created by the prominent buttresses aft of each seat; things that weren’t present in the C8’s more roadster-like predecessors.

Still, it’s quieter than the Coupe with its roof panel removed, and indeed, if you plan on frequently driving al fresco, the Convertible is without a doubt superior. Rear visibility even improves – by a lot – since there’s no second rear window reflecting the engine below. Of course, it must be said that the engine is therefore completely hidden away under the roof storage area, which could be a real bummer if your idea of a fun Saturday morning is to sit next to your ‘Vette in a lawn chair while its small-block is ogled by Cars and Coffee attendees.

With the temperature dipping into the 30s, I put the roof back up while passing through a town called Cougar, which isn’t to be confused with Cougartown, yet somehow still seems appropriate for a road trip involving a Corvette. Soon thereafter, I reached the final lake, Swift Reservoir. It’s vast and devoid of human activity with snow spackling the tree-lined mountains on the other side. It’s shocking that this little slice of Alaska is within two hours of my door. 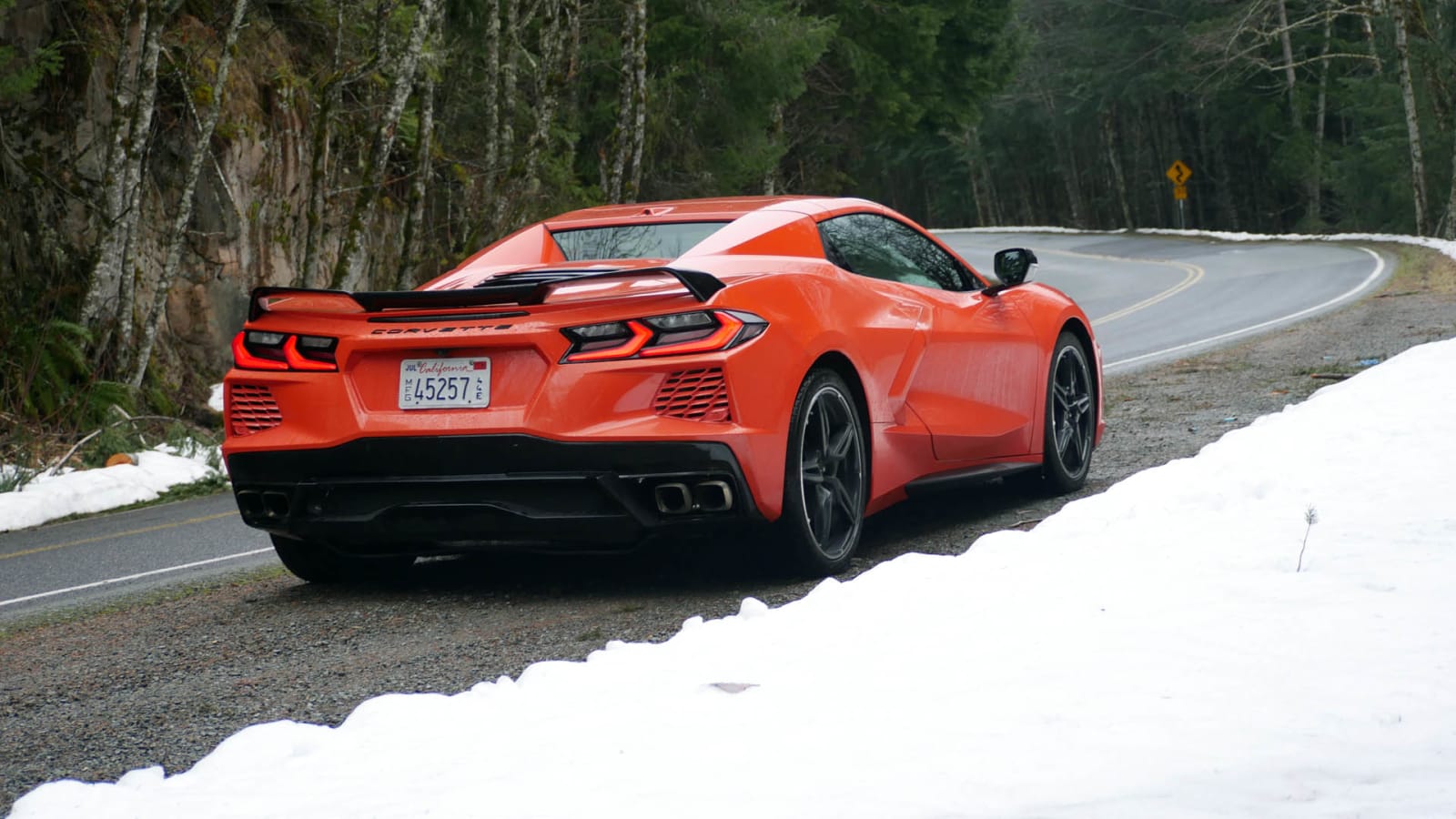 It’s also along Swift Reservoir where the long sweepers of Washington 503 turn into the tighter, more technical National Forest Road 90. Now we’re really talking. The Corvette’s turn-in proves just as immediate and rewarding as I remember from last year at Spring Mountain Motorsports Park where I pushed the Corvette exponentially harder than would be possible in the shadow of St. Helens. Frankly, if you want to read a tale of the C8 in ideal conditions, read that review. By contrast, NF90 is damp in places and often lined in the vestiges of a blizzard from weeks prior. The car is also wearing winter rubber, but this is still an exceptional performance machine that slices from corner to corner with such ease that I inevitably found myself going far quicker than intended with ease.

That sense of ease carries over to sounds the Corvette makes, or rather, the relative lack of them. There’s so much torque available (470 pound-feet) and the mid-engine chassis so capable, that it can comfortably go far quicker than intended while the engine just hums along at 1,500 rpm in fifth or sixth gear. Even “hum” is too loud a descriptor for the 495-horsepower 6.2-liter V8 at that rev count, and unfortunately, the eight-speed dual-clutch automated manual is only too happy to keep it in that range, even in Sport mode. This means calling on the paddles to bring up third or fourth gear just to make things a bit more audibly interesting.

On the other hand, you can also wait for a slow-moving car and gun the V8 to pass. This is a cliché, but when the engine is only a few inches from your back, it seems fair game to describe the experience as spine tingling. Wow. It’s just so visceral and loud, like no twin-turbo this-or-that could ever be. The ferocity of volume was genuinely surprising considering how much the transmission had kept the engine unobtrusively purring along. Once that happened, I started to look forward to slower traffic ahead. Or found excuses to slow way down. “Oh no, is that a log in the road? Phew, just a pine cone. Gun it!” 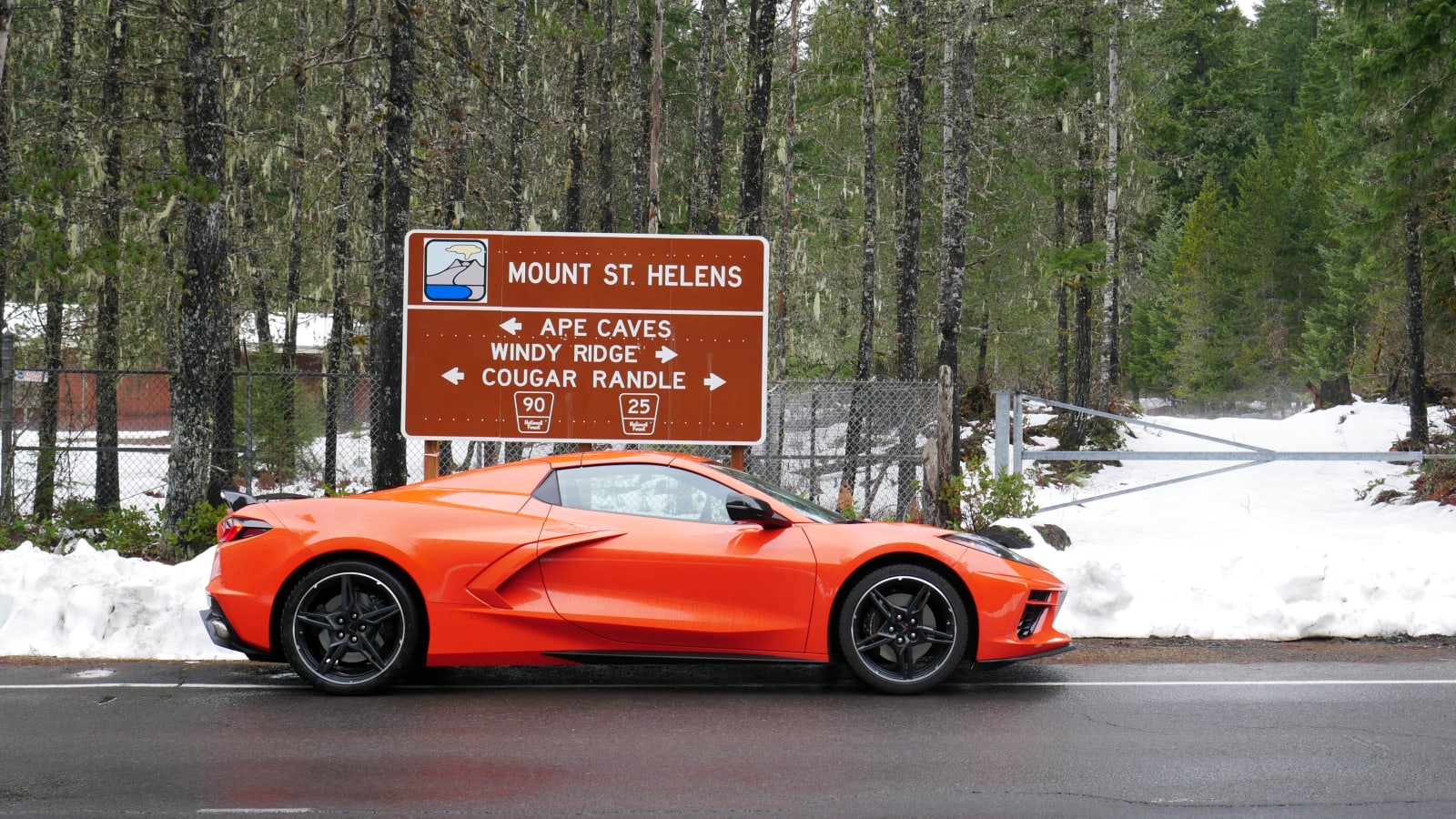 Eventually, though, no other vehicles were going in my direction, and the only thing going the other way that wasn’t an SUV or a truck was a Hyundai Accent. And it was wearing chains. Uh oh. This was unexplored territory for me after all. Washington 503 and now NF90 had proven to be clear, but I still knew absolutely nothing about Curly Creek Road and Wind River Highway, the two roads that would lead me south toward the Columbia River Gorge. There were no road condition updates I could find for them, nor a weather update for “Random Stretch of the Gifford Pinchot National Forest.”

A sense of anxiety started to settle in. I had also effectively passed Mount St. Helens, meaning my quest was looking grim. Perhaps the viewpoint was actually to be found on NF25, which branches north from NF90, or on NF30, which heads northeast towards Mount Adams. Perhaps I was completely on the wrong road. Perhaps I had just dreamed that someone would make something called a Suzuki Kizashi.

A sign said only 31 miles to the Gorge, but Curly Creek Road is much narrower. And bumpier. And for the first time, there’s a splotch of snow on the road. I swear that I’ll turn around if there’s more. Sure enough, a mile on, the road is awash in slushy snow as it disappears around a corner. Is it just for 20 yards or 20 miles? I came to a stop. Then, I saw it, embedded in a field of snow, teasing and taunting me: McClellan Overlook 1/4 Mile Ahead. Was that it? I hadn’t seen that on the map before I left and without cell service I couldn’t check. Should I risk it? Surely winter tires can handle a quarter-mile of uncleared snow on a mountain road. Right?