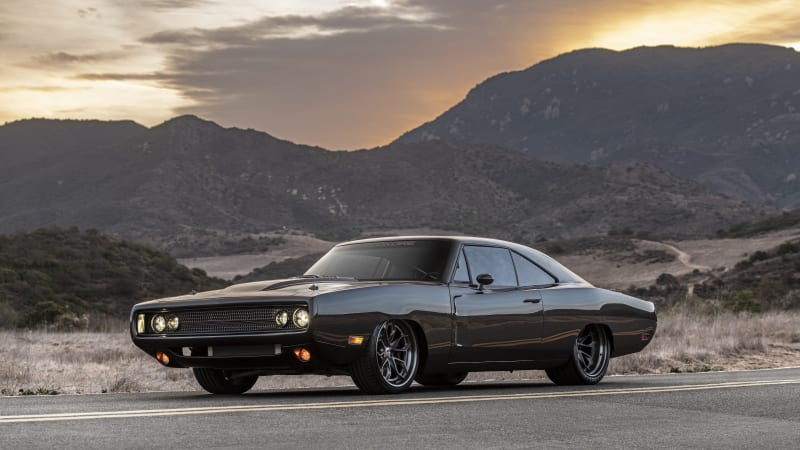 Built for actor Kevin Hart, who wrecked one of SpeedKore’s earlier builds, the resto-modded muscle car goes above and beyond the average aftermarket build. The company started by scanning a stock 1970 Charger, and feeding the data to a five-axis CNC machine that created the molds. SpeedKore then made the body using aerospace-grade carbon fiber to ensure a smooth, strong, and regular finish. Hart asked to leave it bare.

Mechanics dropped the body on a SpeedKore-designed frame with an integrated 14-point roll cage. Even if the build ended there, and the powertrain remained completely stock, we’d be impressed by this Charger. Its composite construction and its re-engineered underpinnings are merely the tip of the proverbial iceberg, however.

Popping the massive hood reveals a 7.0-liter Hellephant V8 engine that we heard scream its heart out in late 2020. It’s tuned to develop 1,000 horsepower and 950 pound-feet of torque, figures that eclipse Dodge’s regular-production Hellcat models. It spins the rear wheels via a Challenger Demon-sourced eight-speed automatic transmission and a nine-inch Ford rear end, and it exhales through a custom-built exhaust system.

After rummaging through the Mopar and Ford parts bins, SpeedKore hunted through Chevrolet’s stash. It pulled out a sixth-generation Corvette front suspension system that it modified with Detroit Speed and Woodward parts. Out back, the rear end is linked to the frame via a four-bar system and adjustable Penske shocks. Brembo brakes (including six-piston front calipers and four-piston rear calipers) reign in the V8’s power when needed.

The 3.0-liter supercharger pokes right through the hood. Look a little bit closer, and you’ll notice that most of the exterior trim pieces (including the grille) are made from solid aluminum. Inside, the Hellraiser gains Recaro sport seats for the front passengers, new-look gauges, a three-spoke steering wheel, and a specific center console, among other features. All of these components are new, but they give off a 1970s vibe. It doesn’t sound like it’s from the 1970s, though: SpeedKore installed a state-of-the-art sound system assembled with Focal components.

SpeedKore didn’t reveal how much it charged Hart for the Hellraiser, but it likely wasn’t cheap. The engine alone was priced at nearly $30,000, and it sold out in merely 48 hours. If you want one that’s a little more accessible, keep an eye out for some of the company’s earlier builds; they sometimes pop up for sale. In 2020, an exotic car dealer in Texas listed one of four carbon fiber-bodied Dodge Challenger Demons at approximately $170,000.

Next Post : Overall participation in open source was down in 2020 »