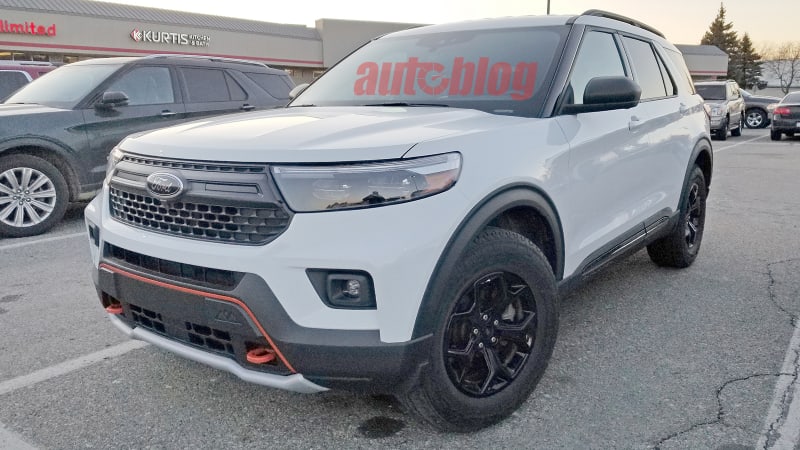 Ford’s new mystery rugged-trim Explorer has been spotted yet again, this time without any pretense of disguise whatsoever. We previously speculated that this might borrow Ford’s “FX4” nomenclature used on the Ranger and F-Series pickups, but now that we’re seeing the exterior badges and seat embroidery, it appears “Timberline” is indeed the winner. That was just one of many names Ford sought to protect in a flurry of trademark filings from 2018 and 2019, among which now-known nameplates such as “Maverick,” “Badlands” and “Outer Banks” were also established, and it appears this is one track for introduction in time for the 2022 model year.

Based on what we see here, we expect this to be predominantly a tire-and-wheel package. While Ford may reserve the treatment for 4×4 variants of the Explorer, we’re not talking about a Raptor-style package here. Realistically, it will probably fall somewhere closer to Tremor on the Ford off-road spectrum: a little beefy, but not a full Porterhouse.

Apart from the iconography we mentioned above, the Timberline is also differentiated by an orange stripe across the lower front bumper along with color-matched recovery hooks. The tires are Bridgestone Dueler Revo 3s in 265/65R18 — just under 32 inches — and they’re wrapped around unique wheels marked by a Timberline logo.

As for that doohickey that resembles a “Jeopardy!” buzzer or lavalier mic draped over the passenger seat? Well, that’s actually a vital piece of testing equipment used by the test driver to log issues with the prototype as they happen. Road Test Editor Zac Palmer explains:

“Every time there is an ‘event’ with the car (something goes wrong, literally anything), you press it and it tells the vehicle data recorder in there to take a snapshot of the last few minutes,” he said. “There’s a nifty little red box hiding under the passenger seat that the cord you see there is attached to.”

We said before that we don’t expect to have to wait long to find more about this new Explorer. The 2021 Chicago Auto Show would have been the likely venue for its unveiling, but given the current state of such gatherings, we’re inclined to believe Ford will find a way to show the Timberline on its own turf instead.

Previouse Post :« Shoaib Akhtar calls for probe at ‘highest level of the govt’ after PSL postponed