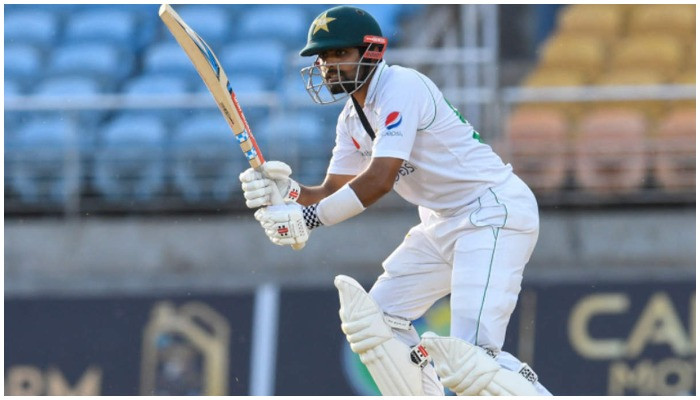 Pakistan skipper Babar Azam said on Thursday that the national squad aims at keeping up the winning momentum in the Test series against Bangladesh.

The first Test of the two-match series between Pakistan and Bangladesh starts tomorrow (Friday) in Chittagong.

The all-format Pakistani batter and captain expressed these views while speaking at a virtual press conference in Chittagong. He also spoke about the pitches in Bangladesh which he described as “slow”.

Azam also spoke about the team’s performance, saying that he expected them to perform well in the series.

“The batting line-up includes senior players who play spinners well. The players joining the Test squad were playing domestic cricket and we will benefit from this,” he stated.

He said that this Test series is also important for Pakistan.

“The team will try to keep up the winning momentum [from the T20 series].”

Babar Azam praised the Test team, saying that he was confident they will perform well in the Test Championship as “there are more matches at home grounds”.

He said that the Bangladesh team is a dangerous side even in the absence of senior players. Azam said they cannot be taken lightly as conditions are difficult in Bangladesh.

“It is not easy to play here. We have to focus and play with patience, we will also try to stay on the wicket.”

Moreover, Pakistan captain expressed concern about the unavailability of a batting coach for the national squad, saying that there should have been one to train their batters for the test series against Bangladesh.

“However, the decision to appoint a batting coach rests with the Pakistan Cricket Board,” he said.

The Australian batting legend, Mathew Hayden, had been appointed batting consultant for the recently concluded ICC Men’s T20 World Cup after former Pakistani cricketers Misbah-ul-Haq and Waqar Younus stepped down from their coaching roles in September.

Babar Azam said the team got less time to prepare for Test cricket after the T20 World Cup. However, he said the cricketers are professionals and will have to adjust to Test cricket soon.

“We have been playing white-ball cricket for many months now we have to adapt to red-ball cricket as soon as possible, we have top spinners in the team,” he said.

When asked about his below-par performance during the recently concluded T20 series against Tigers, Babar Azam said it is not necessary for him to perform well in every series. Other team members will also have to step up, he added.

“It is good that other batsmen took responsibility and scored runs,” he said.