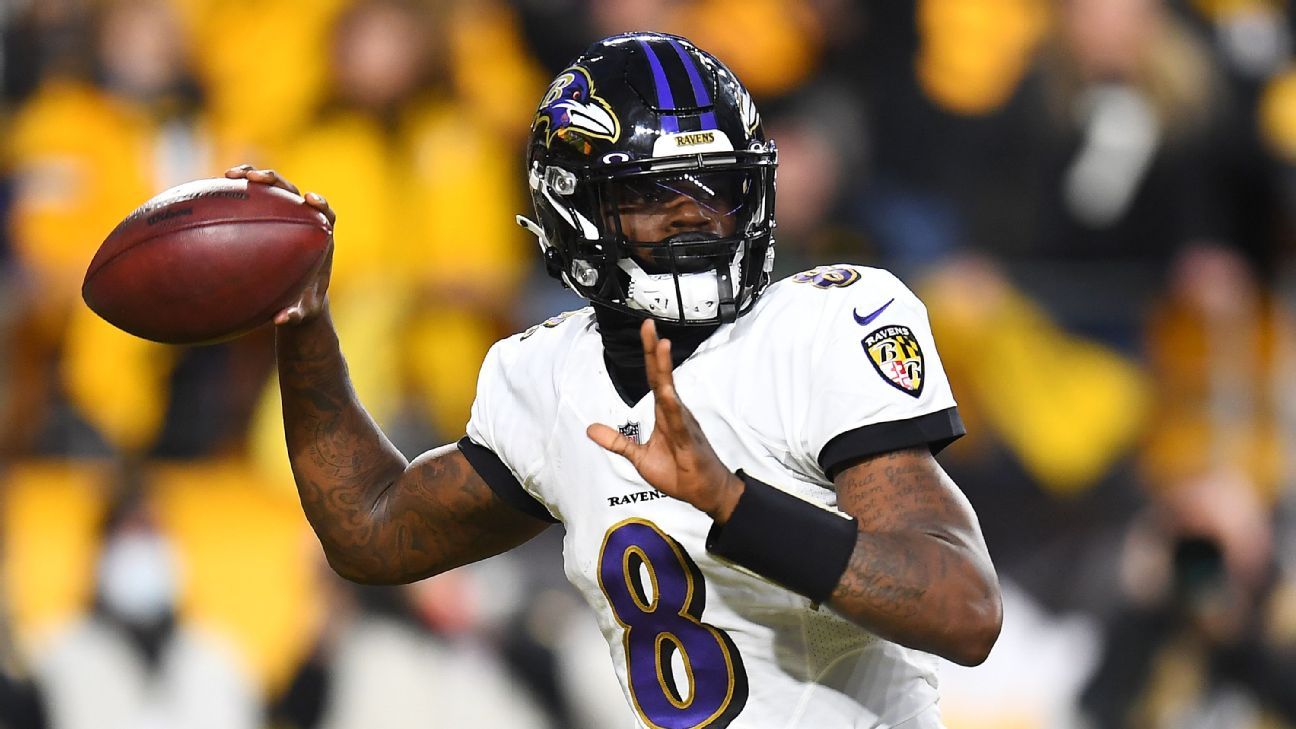 BALTIMORE — Ravens quarterback Lamar Jackson is out for Sunday’s game against the Green Bay Packers, which marks the first time he’s missed a game because of an injury in his four-year NFL career.

The Ravens had held out slim hope that Jackson would play even though he hadn’t practiced all week with an injured right ankle. Tyler Huntley will make his second career start for the Ravens (8-5), who began Sunday with a one-game lead in the AFC North.

A source told ESPN’s Adam Schefter that Jackson is dealing with a bone bruise in his ankle and not an ankle sprain, which is what the Ravens had been referring to the injury as. It would’ve been challenging for Jackson to play with limited mobility behind this Ravens offensive line. Baltimore has allowed a league-worst 47 sacks and had three starters (left guard Ben Powers, right tackle Patrick Mekari and left tackle Alejandro Villanueva) miss at least one practice this week.

The loss of Jackson, the 2019 NFL MVP, is another hit to a banged-up Ravens offense that is averaging 16.6 points over its past five games. On Sunday, Baltimore is without its starting quarterback (Jackson), top two running backs (J.K. Dobbins and Gus Edwards) and three starting offensive linemen (Powers, Mekari and Ronnie Stanley), as well as one of its top three wide receivers (Sammy Watkins).

Huntley, who went undrafted out of Utah in 2020, has impressed teammates in limited action. He led Baltimore to a 16-13 win in Chicago four weeks ago and nearly rallied the team from 21 points down last Sunday in a 24-22 loss in Cleveland. A dual threat like Jackson, Huntley has completed 68.2% of his throws for one touchdown and one interception, and he’s run for 95 yards on 16 attempts (5.9 yards per carry). Josh Johnson will back up Huntley after being signed off the New York Jets practice squad Wednesday.

Last Sunday, Jackson was hurt on the first play of the second quarter when Browns linebacker Jeremiah Owusu-Koramoah dove at the quarterback’s lower right leg after he had thrown a pass. He has been contacted 16 times per game this season, the highest single-season rate by a quarterback in the last 15 years, according to ESPN Stats & Information.

The Ravens are 2-1 in games without Jackson since he took over as their starter midway through the 2018 season. He missed two games because of illness, and he sat out the 2019 season finale after Baltimore had already clinched the No. 1 seed in the AFC.

In addition to being without Jackson, the Ravens are extremely short-handed in the secondary against Aaron Rodgers. Baltimore lost three defensive backs (cornerbacks Chris Westry and Jimmy Smith along with safety Chuck Clark) after they tested positive for COVID-19 over the past four days.

This is an unusual situation for the Ravens, who are now a 9.5-point underdog. Baltimore hasn’t been this big of a home underdog since December 2015, when Ryan Mallett and the Ravens upset the Pittsburgh Steelers as a 10-point underdog.