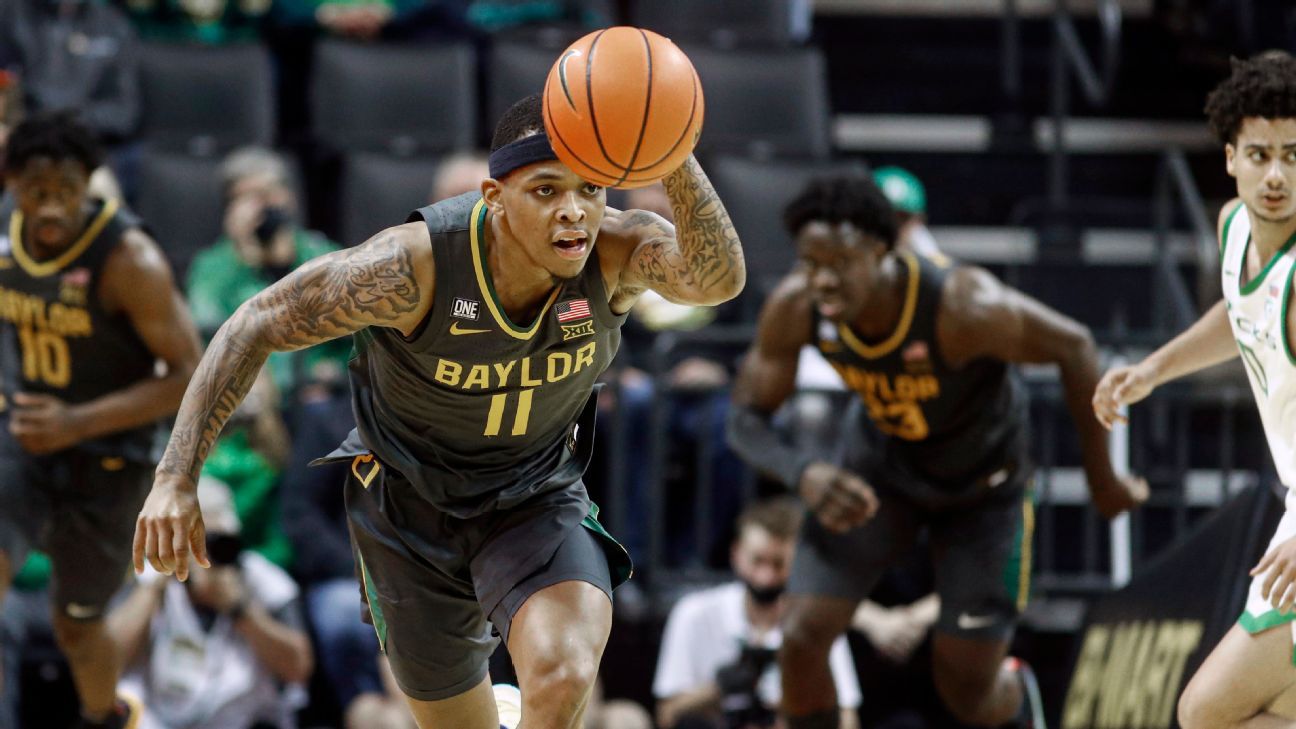 Defending national champion Baylor maintained its top spot in the Associated Press men’s college basketball poll, though not without ceding a No. 1 vote to Arizona, while the six remaining unbeatens continued their rise Monday.

The Bears ended a four-week streak of turnover atop the poll by taking care of Oregon last week, receiving 60 of 61 first-place votes from a national panel that regular covers college basketball. The Wildcats got the only other No. 1 vote and climbed two spots to sixth heading into a brutal stretch of games over the next three weeks.

Duke remained No. 2 after ending a two-week break with three easy wins. Purdue was third while Gonzaga and UCLA flip-flopped their spots with the Bruins — currently in the midst of a COVID-19 pause — rounding out the top five.

The Bears (10-0) reached the top spot last week after dominating then-No. 6 Villanova, something they never accomplished during their title-winning season. But they nearly became the fourth straight No. 1 to lose, falling behind the Ducks by four at halftime before rallying for a 78-70 victory in Eugene, Oregon.

“This was really our first road game in two years. Last year everyone had limited crowds,” said Baylor coach Scott Drew, who picked up his 400th career win. “People want to know how important crowds are; we’re the first No. 1 to win on the road.”

The Wildcats (11-0), who cruised past Cal Baptist, will have a chance to prove they deserve their No. 1 vote. They head to No. 19 Tennessee on Wednesday, then visit the Bruins on Dec. 30 and No. 8 Southern California on Jan. 2.

Throw in a trip to Arizona State on Jan. 8 and the Wildcats won’t play a home game for 24 days.

“I didn’t even know that, to be honest,” Arizona coach Tommy Lloyd said. “I always tell you guys, Tennessee on Wednesday and then Christmas. We have an awesome opportunity on Wednesday. We’ve had a really strong start. I played at Tennessee and it’s a monster, and it’s a great opportunity for us to go in there and test ourselves.”

The Wildcats were followed by seventh-ranked Kansas and two more unbeatens in the Trojans (12-0) and Iowa State (11-0), both of which moved up two spots. Alabama fell four spots after its loss to Memphis and rounded out the top 10.

“That’s the best Memphis has played all year, so you have to give them a lot of credit,” said Crimson Tide coach Nate Oats, whose team faces Davidson before a showdown with the Volunteers. “We have a lot of work to do.”

Texas also moved up one spot to No. 16 and was followed by LSU (11-0), fast-climbing Xavier, Tennessee and Kentucky. The last five spots belonged to Colorado State (10-0), Providence, Villanova, Wisconsin and Texas Tech.

Xavier made the biggest jump this week, climbing four spots to No. 18. The Musketeers beat Marquette over the weekend and now head into a two-game doozy against Villanova and UConn for early Big East supremacy.

Villanova took the biggest topple, falling from ninth to No. 23 after getting blown out by Creighton. The Wildcats’ 79-59 loss came after a 57-36 loss to Baylor, the first time since 1998-99 that they’ve lost consecutive games by at least 20.

Providence entered the poll at No. 22 after its win over UConn, while Wisconsin moved back into the poll.

“We knew coming on the road would be a challenge for us. I was proud of our players’ preparation,” Providence coach Ed Cooley said. “They did a really good job paying attention to detail and understanding the importance of a Big East game.”

Dropping out were the Huskies and Arkansas, which lost to Speedy Claxton’s Hofstra over the weekend.