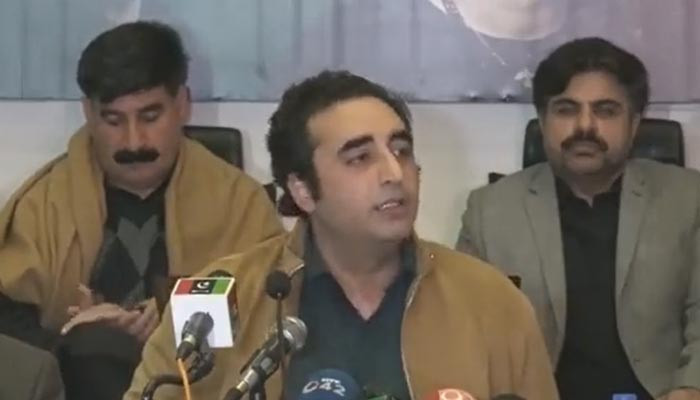 LAHORE: PPP Chairman Bilawal Bhutto Zardari on Thursday announced that he will lead a “long march” against the PTI government from Karachi to Islamabad on February 27.

Addressing a news conference in Lahore, Bilawal demanded an immediate and transparent election in the country as he termed democracy as the only solution to the problems of the country.

He said that the nation wants to get rid of the “selected” government and a transparent election is the only solution.

Criticising the government’s economic policies, the PPP chairman said that the government has “surrendered” before international organisations and now the country’s economic autonomy is “at stake”.

Speaking about the State Bank of Pakistan (Amendment) Bill, which was presented in the National Assembly last month to meet the conditions of the International Monetary Fund (IMF), Bilawal said that SBP’s autonomy is also “at stake”.

“The State Bank will neither be answerable to Parliament nor any courts,” he said.

He said the party is working on a legal course of action to take against the SBP bill.

PPP to protest in front of Parliament against “mini-budget”

Meanwhile, regarding the supplementary finance bill, which is referred to as the “mini-budget” by the Opposition, Bilawal lashed out at the government saying that their “intentions are clear to get it approved by force” in Parliament.

Terming the so-called “mini-budget” as an “anti-state bill”, the PPP chairman said that we will protest in front of the Parliament house on the day voting for it is held.

It is pertinent to mention here that Federal Minister for Information and Broadcasting Fawad Chaudhry has said a National Assembly session has been summoned on January 10 for the approval of the supplementary finance bill.

Sharing details of his line of action in context with the protest and long march against the PTI government, Bilawal said that PPP would initiate its long march on February 27 from Mazar-e-Quaid.

He said: “No matter what comes our way, we will reach Islamabad at any cost and will present our demands.”

He added: “We want all institutions to remain neutral.”

Bilawal further added that his party is starting its next phase of protests from today, hoping that no hurdle and interference will be made in their struggle.

‘PPP no longer a part of PDM’

Answering questions related to PPP’s former alliance with the Opposition’s Pakistan Democratic Movement (PDM), Bilawal said that PPP is not a part of PDM any more.

“Now it is up to them whether they resign from parliament or not,” he said, adding: “PDM has not consulted with us on its long march against PTI.”

Meanwhile, during the press conference, he also welcomed the Inter-Services Public Relations (ISPR) statement regarding their neutral stance in political matters, saying that it’s a wise comment and the institution’s role must remain neutral.

Courts should give justice to Zulfiqar Ali Bhutto

Speaking about his grandfather Shaheed Zulfiqar Ali Bhutto, he said that the court should “wash away the stain on it of Bhutto’s judicial murder”.

“The situation that the country is in at the moment began after the assassination of Zulfiqar Ali Bhutto,” Bilawal reiterated, adding that the courts should give provide Bhutto and the party justice.

‘Merger of tribal districts not complete’

Bilawal said that it was his mother, former prime minister Benazir Bhutto, who first spoke of the merger of tribal districts with the rest of Pakistan.

“The merger is not yet complete. We demand a complete and proper merger,” he said.

The PPP chairman said that the promises made to the people in those areas “have not been fulfilled”.