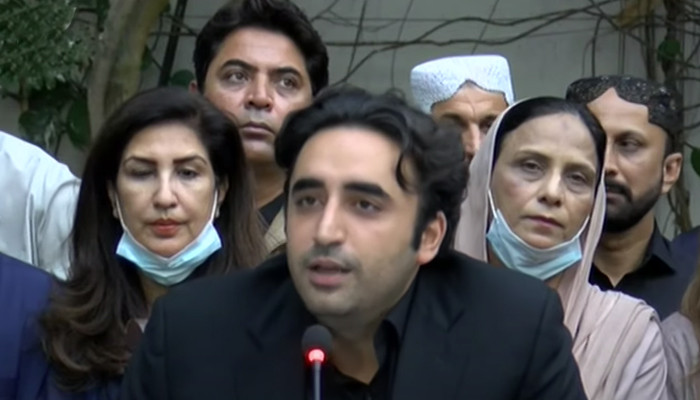 The Sindh Local Government Act was passed with amendments in the Sindh Assembly last week in a chaotic session that saw loud chants by a fervently protesting Opposition.

The PPP chairman, addressing a press conference in Karachi, said the law introduced by the Sindh government does not exist in any other province, as he slammed the critics.

He mentioned that the party is also making progress in Lahore, adding the people of Karachi and Lahore have pinned hopes on PPP.

“Karachiites believe that PPP can resolve their issues,” he said, lamenting that everybody has the right to criticise but one should not lie.

Sharing details of the developmental projects under PPP, Bilawal mentioned that the party has been allotting houses since 1970 to the masses, while PTI has “just started this initiative now.”

“PPP is the only party that understands the problem of the citizens,” the chairman boasted, highlighting that his party has given more powers to local body representatives.

Shedding light on the tenure of Asif Ali Zardari as the president, Bilawal mentioned that he gave all the powers to the Parliament.

“PTI is introducing systems of their own choice in Punjab; control of health and education system have been snatched from the representative of local government in Islamabad,” he said.

He mentioned that under the new Act, property taxes will also go to local bodies. “If local bodies collect taxes there will be no budget problem,” he maintained.

Bilawal continued: “Moreover, police, health and education sectors will be accountable to the local body representatives.

The chairman mentioned that PPP is regaining its lost trust as “we believe in serving the people.”