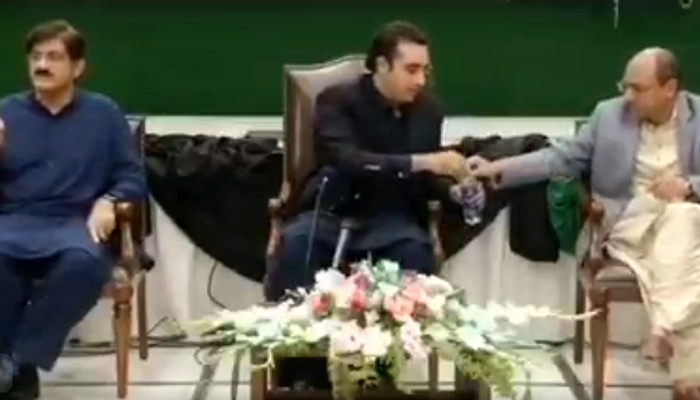 PPP Chairman Bilawal Bhutto-Zardari has drawn sharp rebuke from social media users over what has been termed an “elitist” move after he handed over a water bottle to Minister for Information Sindh Saeed Ghani for him to open it and give it back to him.

A video showing the moment went viral on Facebook in which Bilawal could be seen sitting alongside Ghani and Chief Minister Sindh Murad Ali Shah while addressing a press conference in Karachi.

The PPP Chairman picks up a bottle of water and for a moment attempts to open the plastic seal on the cap. Ghani is seen reaching out to assist him, even before Bilawal pushes the bottle his way, but people were furious nonetheless, questioning why he couldn’t complete such a small task on his own.

One user was “annoyed” at how Ghani “threw” the seal and the bottle cap.

Similar sentiments were echoed by another commenter, saying the throwing of the wrapper is the “only issue” they have. “These are the manners they have,” the user remarked.

Another user sarcastically remarked that the episode is a “great show of democracy recorded on camera”, referring to the PPP’s oft-repeated claim that they are the only truly democratic party in the country.

“He should have just held the bottle for him too as he drank from it,” they said, adding: “It would have been an even greater show of democracy.”

One user said that it was a big deal that he even passed on the bottle himself when he could have avoided doing that even. “Give credit where it’s due,” the user wrote.

Seeing the upside to it all, this user pointed out that offering someone water to drink is a good deed and thus Ghani will be rewarded for it.

“One should not create a mountain over a molehill like this,” they said.

This user, however, was not in as kind a mood, and called the series of events a black mark that represents our political system”.

“They think those around them to be their servants, what to say of the public.

“Even Oxford could not put a dent [in such behaviour],” the user wrote.

This person wondered if Bilawal would have “burned 25 calories” had he opened the bottle cap himself.