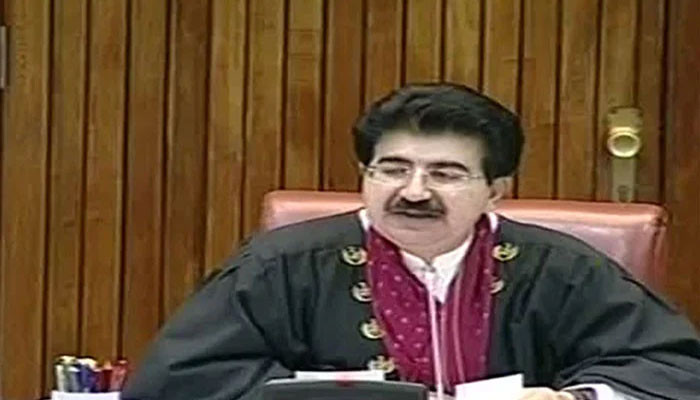 ISLAMABAD: The Senate was deeply polarised during a debate over a bill to decriminalise suicide attempts on Monday.

Senate Chairman Muhammad Sadiq Sanjrani deferred the bill, issuing direction that the input should be taken from the Council of Islamic Ideology (CII) as the House resumed on the private members day after the two-day recess.

The criminal laws amendment bill, which proposes to amend the Pakistan Penal Code (PPC) 1860 and Code of Criminal Procedure (CrPC) 1898 to abolish the punishment for those making abortive attempts to commit suicide, was moved by PPP’s Senator Shahadat Awan, with a plea that this is done by the persons suffering from mental disorder, who deserve medical treatment instead of punishment.

He said it has been observed that such people are mostly denied immediate treatment and referred to medico-legal formalities, which puts their lives at risk. “Therefore, an attempt to commit suicide, which currently carries one year jail term, should be decriminalised,” he emphasised.

Responding to the concerns expressed by some members, the PPP senator explained that the Senate Standing Committee has already unanimously passed the bill, whereas the religious scholars and psychological experts have also supported the bill. He pointed out that the House passed a similar bill back on February 19, 2018, which lapsed subsequently.

Leader of the House in the Senate Dr Shahzad Wasim said the act of attempted suicide must not be co-related with mental disorder. The PMLN’s parliamentary leader in the Senate, Azam Nazeer Tarar said 11 out of 13 members of the Senate committee had unanimously approved the bill. The amendment should be passed to save the lives that are lost due to the procedural hitches in the way of treatment under the present law, he added.

PTI’s Senator Mohsin Aziz, who is also the chairman of the Senate Standing Committee on Interior, said depression could also be a reason behind a suicide attempt, adding that the jail term could have a negative impact on the psyche and behaviour of the depressed individual.

Leader of the Opposition in the Senate Syed Yousuf Raza Gilani had no objection to the passage of the bill but inquired that if the document, proving approval by the Council of Islamic Ideology (CII), was available.

Minister of State for Parliamentary Affairs Ali Muhammad Khan contended that the opinion of religious scholars should be sought before the passage of the bill. He said it should be thoroughly discussed, so that an otherwise good bill is not lost in confusion.

JUI-F’s Senator Maulana Abdul Ghafoor Haidri said that attributing suicides to mental disorders was inappropriate as today the people, facing abject poverty and joblessness, were committing suicides under compelling circumstances. However, it was prohibited in Islam, he clarified. Another JUI-F’s Senator Kamran Murtaza wondered that how can a suicide attempt be permissible when suicide was forbidden. He stressed that the inappropriate amendment be withdrawn as it lacks any justification.

Senator Faisal Javed of the PTI proposed that the bill should be referred to the CII. However, the consideration of the bill was deferred by the Senate chairman.

Later, the joint opposition in the Senate strongly opposed placement of educational institutions in the Islamabad Capital Territory (ICT) under the administrative control of Municipal Corporation Islamabad (MCI) and they were joined by two key members of the treasury benches.

While PTI’s Senator Faisal Javed sought a clarification about how to deal with the gap until the new local government is installed. Another government member, Senator Kamil Ali Agha of the PML-Q saw the move to be a ploy of the private schools/colleges eyeing 2,50,000 students of government institutions. He vehemently opposed the placement.