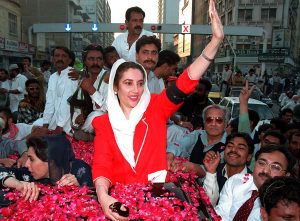 “I believe that democracies do not go to war; that’s the lesson of history, and I think that a democratic Pakistan is the world community’s best guarantee of stability in Asia”, Benazir Bhutto.

Today marks the 14th death anniversary of the inspiring lady, Benazir Bhutto, who was martyred in a political rally in Rawalpindi. The out-daring, brave and hardworking lady, Benazir Bhutto, was a Pakistani politician who became the first woman leader of a Muslim nation in modern history. She served two terms as Prime Minister of Pakistan, in 1988–90 and 1993–96.
Her son, Bilawal Bhutto Zardari, who is the current Chairman of Pakistan’s People Party, paid tribute to her mother on her 14th martyrdom anniversary by saying,
“For democracy, Shaheed Mohtarma Benazir Bhutto lost her father, two brothers, and even her mother. But she never feared dictators. She kept fighting for democracy till the last hour of her life and, in the end, achieved martyrdom. Her struggle to make the country a true welfare state in the light of the thoughts and vision of our founding ancestors is historical”.
Benazir became the titular chairman of the Pakistan People’s Party (PPP) after her father was executed in 1979 during the regime of Mohammad Zia-ul-Haq. President Ghulam Ishaq Khan removed Bhutto from office just two years into her first tenure. She launched an anti-corruption drive and was re-elected Prime Minister in 1993.
Benazir Bhutto is the only Pakistani Prime Minister to address the US Congress in a joint session address, receiving a thundering two-minute standing ovation. It was under her guidance that Pakistan received a unanimous resolution at the OIC Summit in Casablanca, seeking a solution to the Kashmir conflict by UN resolutions for the first time. During her term, Pakistan’s Commonwealth membership was also restored. Benazir Bhutto was also named among seven winners of the UN human rights prize.

During her tenure, monthly stipends for widows and orphans were initiated for their welfare. She supplied electricity to the countryside and established schools all around the country while in office. A Women’s Ministry was founded to promote gender equality and solve women’s issues. Furthermore, a Woman Bank was established to economically empower the country’s female population. Strengthening the country’s defense was one of the top agendas of the Benazir government. Hunger, housing, and healthcare were among her biggest priorities, and she hoped to continue modernizing Pakistan.
In November 1996, Under allegations of corruption, economic mismanagement, and a decline of law and order, her government was dismissed. Benazir Bhutto lived in exile in London for several years. She returned to Pakistan intending to participate in the 2008 general election, but she was assassinated in late 2007 after an attack on a PPP rally in Rawalpindi. She was brought to the hospital but died soon after due to injuries. Rioting occurred across the country in the aftermath of her death. Pakistan was thrown into chaos with the death of the country’s most popular democratic leader.
Benazir Bhutto’s accomplishments have been hailed as a victory for Muslim women in the global fight against Islamic extremism. Her efforts and struggles to promote democracy have left an indelible mark on her opponents, who hold her in high regard. Her career impacted a lot of activists, including Nobel Peace Prize winner Malala Yousafzai. Apart from all these, one thing is for sure that her national spirit, lengthy fight, and great leadership will live on in the minds of future generations forever.