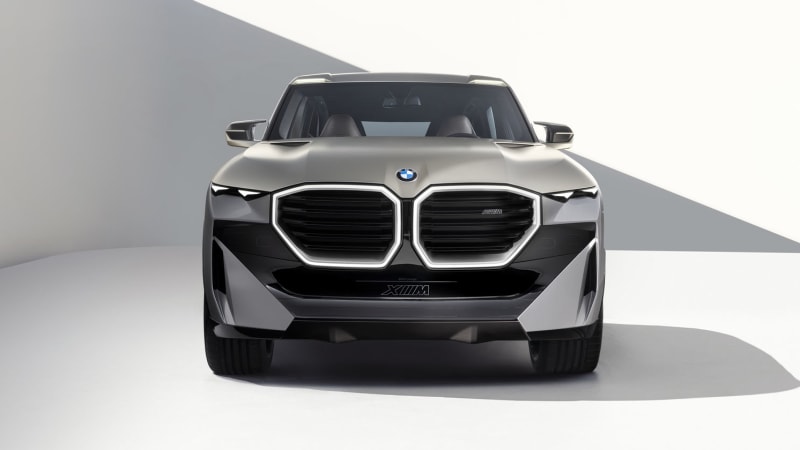 So much has been said about big BMW grilles that anything more feels like beating a dead horse. But the horse has reared up again, flaring its gigantic nostrils.

The automaker just revealed the BMW Concept XM, above, which previews the first exclusively M Division product since the M1. The range-topping SUV is notable for its 740 horsepower. And its plethora of polygons. And its honking big grille, the grille to gobble all grilles. And maybe suck up a cat or a pedestrian or two.

As if the size — made to appear even bigger by the tiny headlights — were not sufficiently in-your-face, the perimeter of the XM grille lights up. Seriously. Do the lights race round and round in opposing directions, or change colors? At least during the holidays? BMW design department, feel free to use that idea.

(BMW is rumored to be showing a car at CES in January with body panels that change color at the touch of a button, so anything’s possible.) 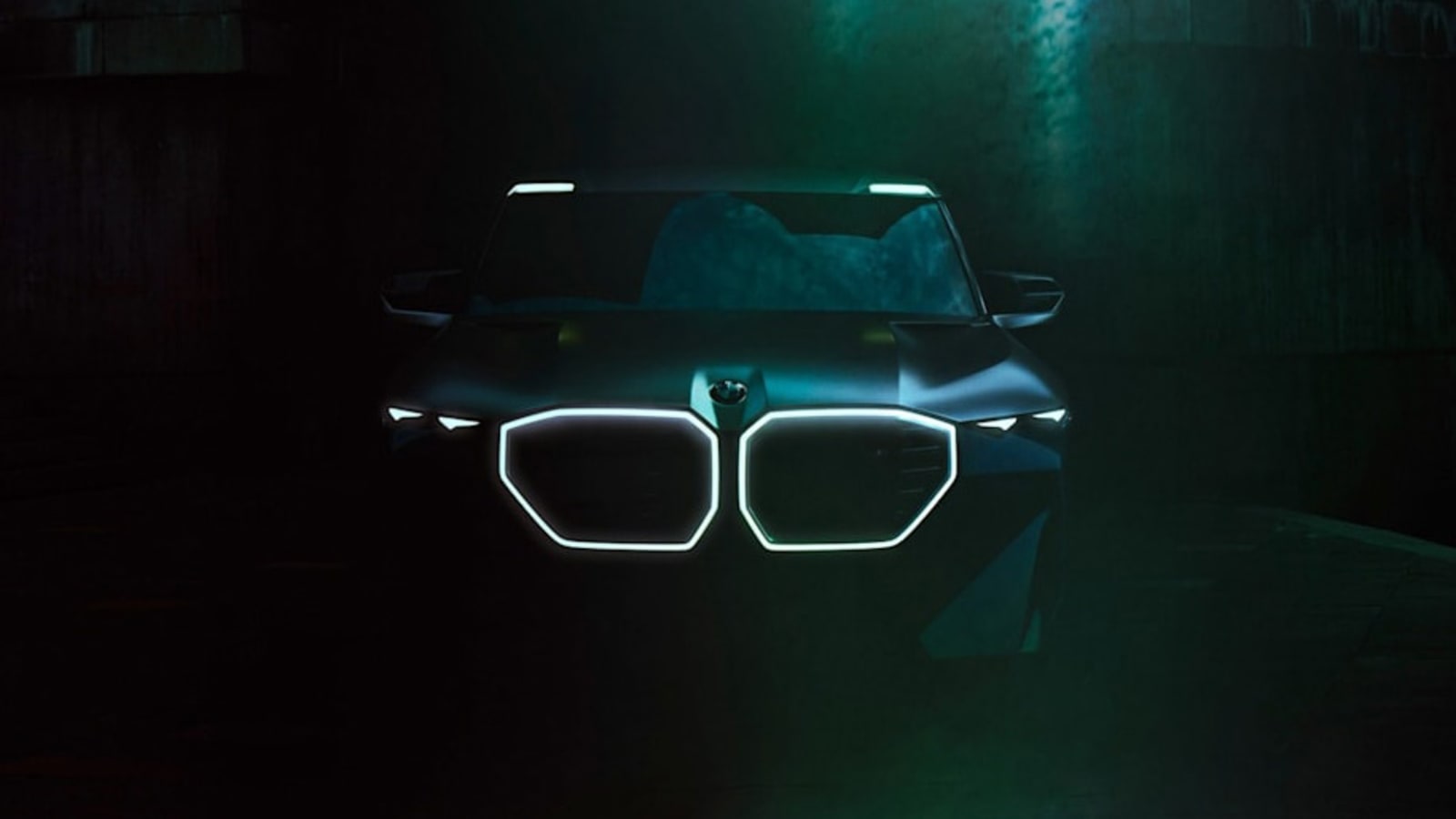 I kid, though. The XM is a concept, and concepts are showcases for wild ideas. But it follows several production cars like the toothsome 2022 M3 and M4. (Office joke when the 4 Series was revealed: What does BMW stand for? Beaverean Motor Works.) Commenters and critics have mostly said yikes, though the look has grown on some of us. We can all agree the approach is bold, which was the goal. BMW’s designers have defended the design, repeatedly, as not intended for everyone, and meant to leave no one indifferent. Mission accomplished.

Like this design direction, or don’t. What’s interesting is where it fits into brand history. BMW’s website provides context. The kidney grille originated in 1933 on the BMW 303, and some cars in what you might call the original 3 Series wore it well: 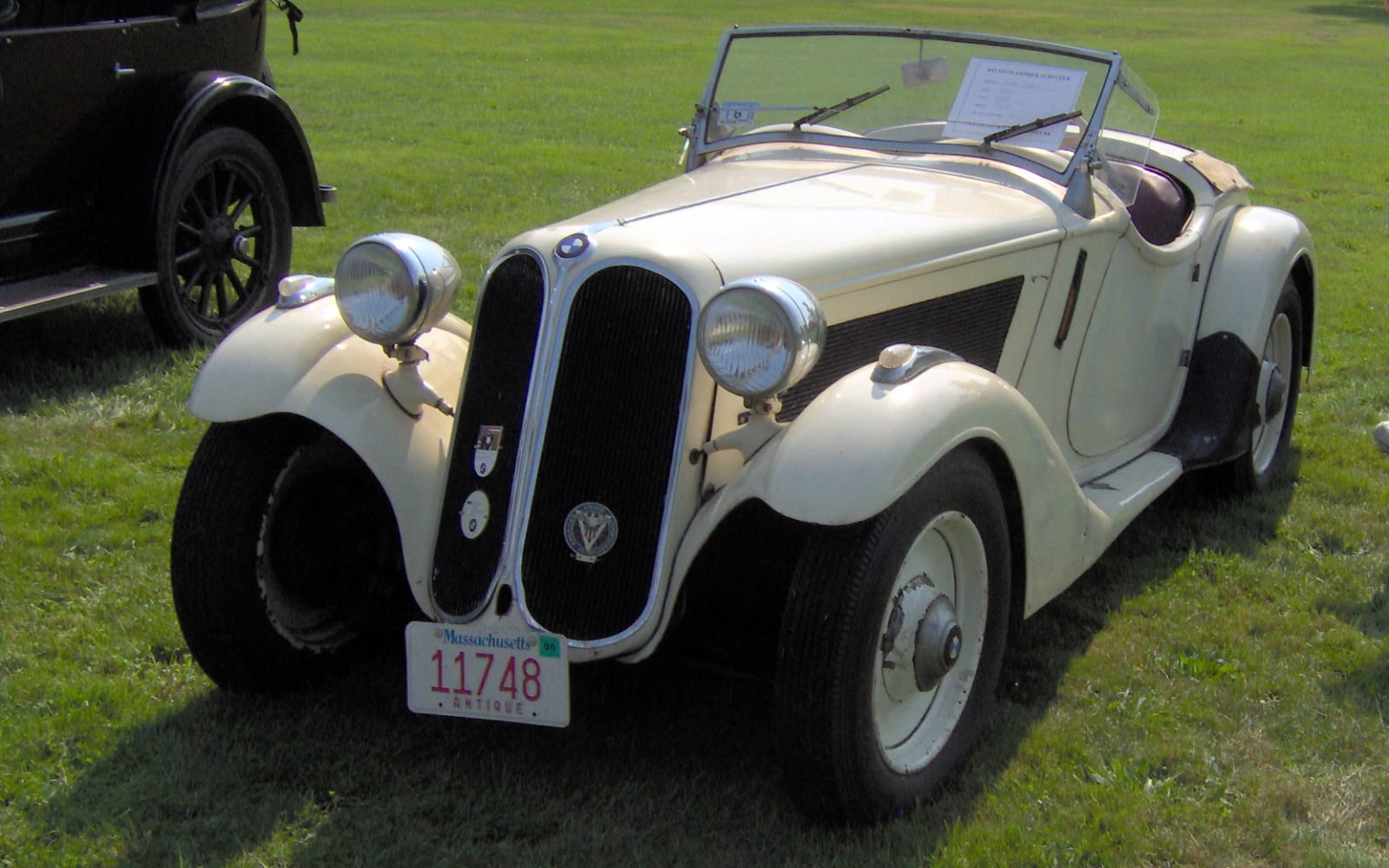 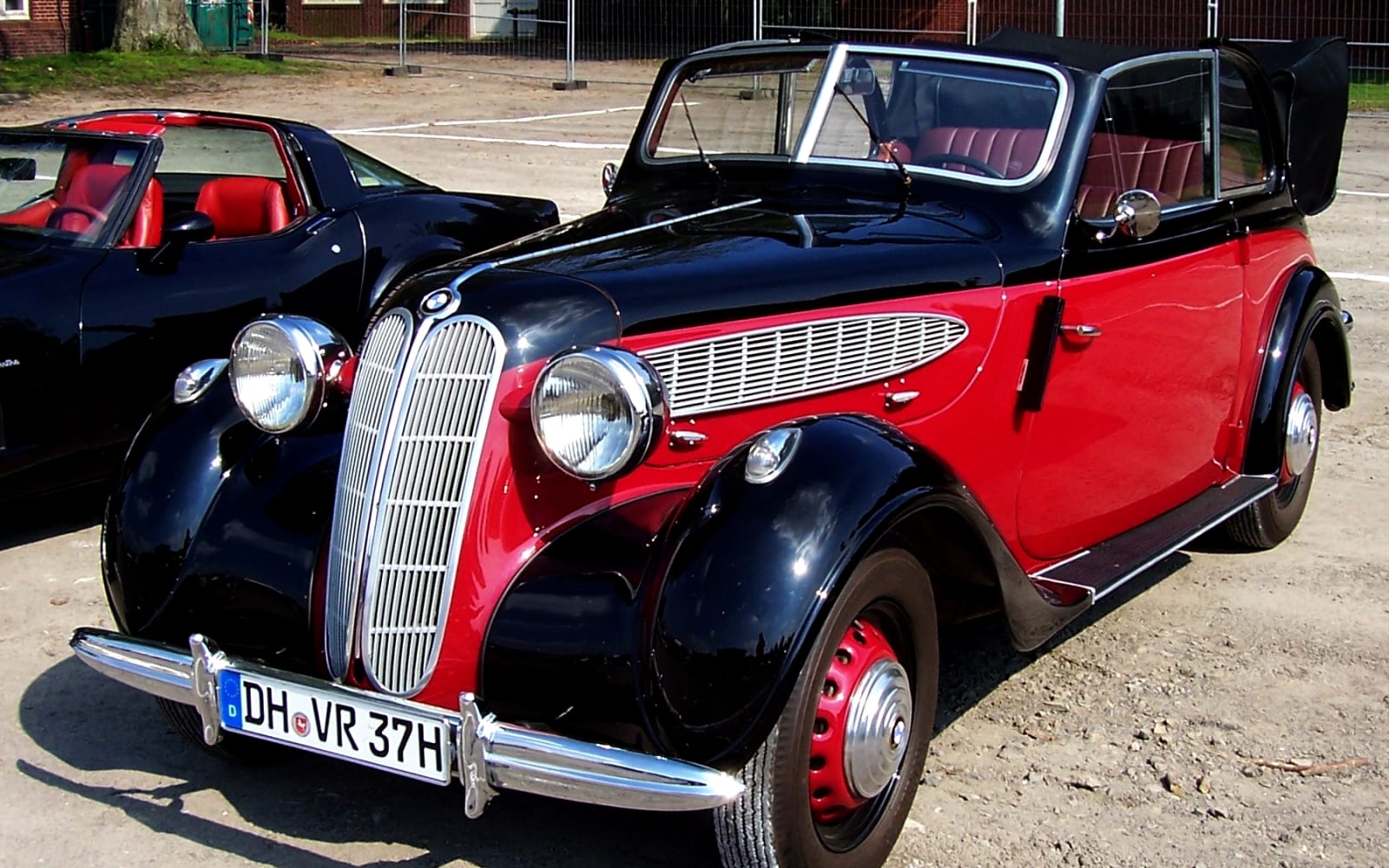 But by the 1950s, the grille motif was smaller — “narrower, and thus more elegant” — on models like the 503, and the 507 from 1956 was the first design to make the kidneys horizontal and employ them in a sharknose. The kidneys grew smaller still in the 1960s on models like the 2002 or 3.0 CS/CSi, and were mere Chiclets on the M1 in 1978 and 8 Series in the 1990s. Which brings us to the current crop of big-grille cars like the 4 Series, and the future as foretold by the concepts. Fair to note that big isn’t always bad: The X7 grille is big, but that’s a big car.

The big-grille trend has happened just as the need for a grille is about to diminish, or even vanish altogether.

I’m no car designer. My experience is limited to publication design. But in that world, there’s a classic text, “Editing by Design,” by Jan White, which stresses that design is not decorating — “not mere ornament.” Design choices must serve a practical function. Don’t we all love tools that are designed to feel good in the hand and work well, or elegant buildings that fit harmoniously in their setting?

The radiator grille on the BMW 303 was big because it had to be. That’s the only way the engine got air. Over decades of subsequent designs, engine cooling requirements and sources changed, making this kind of grille size unnecessary. It’s now surely, and mostly, an aesthetic choice for brand identity. BMW isn’t alone there.

Of course, cars like the M1 didn’t need a big grille for that. Its little grille whispered menacingly: “I am the most bad-ass BMW there ever was.” 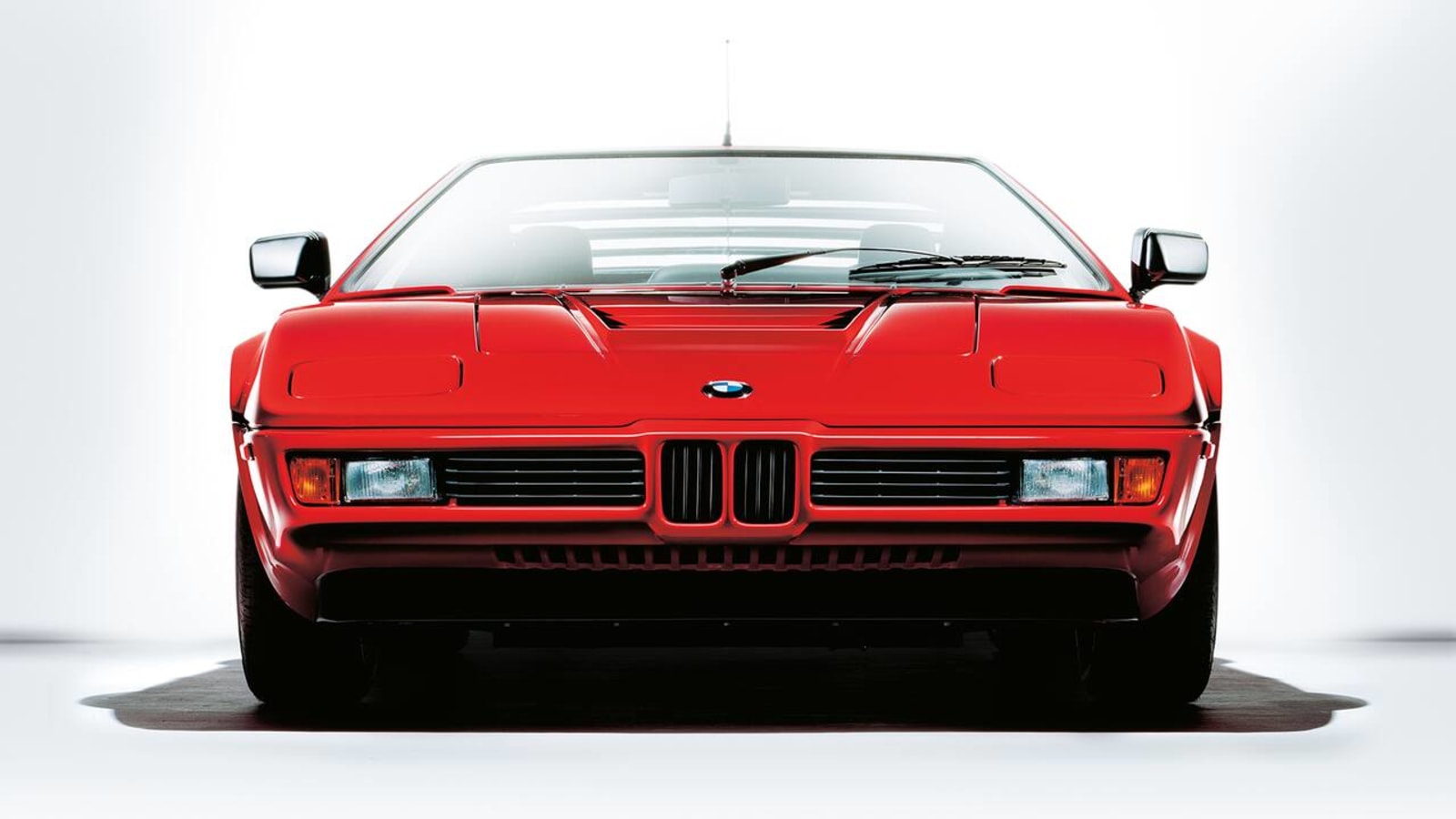 The No. 1 rule of business is: Ignore sunk costs. Just because you’ve had kidneys for 90 years, who’s to say you need them for the next 90? At least quit leaning so hard into an anachronism. If big grilles are controversial on a combustion car, they’ll look even sillier on an EV. Function over form.

Gotta say, the grille looks kind of wicked-good on the Vision M NEXT, below left. But not so much on the iX at right. BMW says the iX grille is a “completely closed off” surface that serves as an “intelligence panel” for sensors. But like the 4 Series, it’s so big it’s bisected by the license plate. And obviously there aren’t sensors behind the license plate, so it’s bigger than needed for the electronics. It’s big for big’s sake. 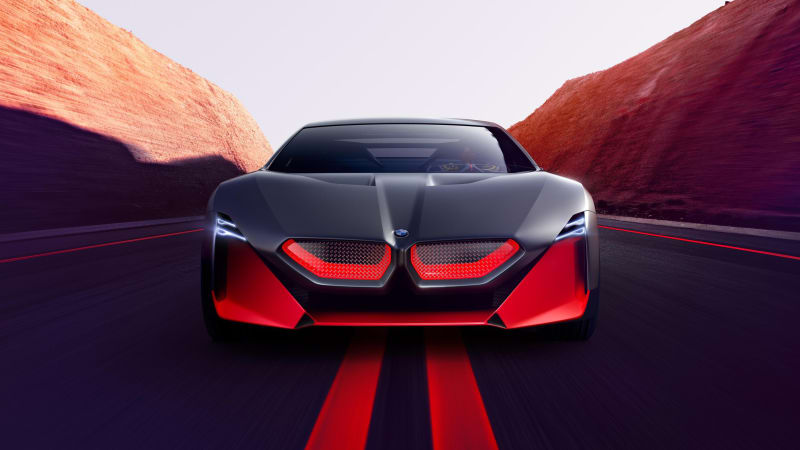 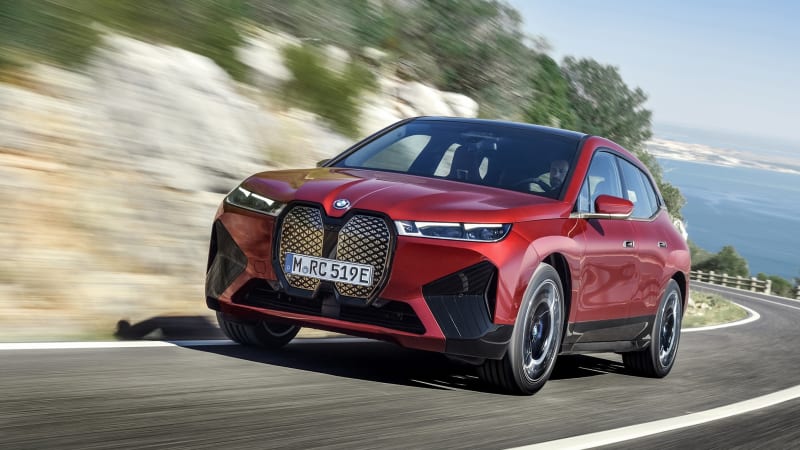 On the i3 electric car, BMW kept a small non-functioning grille outline. Lots of EVs now use an outline, surrounding a body-colored panel. And maybe our brains need that — a design vestige that fits our preconception of what a car is supposed to look like. Some technologies have echoes; people who’ve never used a rotary phone still say they’re dialing a number.

The alternative is to have nothing. The first-gen Nissan Leaf’s front end said, “I’m like a frog: green and cute.” But the Tesla Model 3’s naked front end is an expanse of featureless plastic that seems unfinished. It’s one of the only cars whose looks are improved by a front license plate.

Something probably does need to be up front to hide driver-assist sensors. Otherwise, BMW should regard these big-nosed gas-burners as the swan song for internal combustion. Chart a new course in the EV era, maybe with a new look that even kills the kidneys. But keep the rondel — that’s still cool. 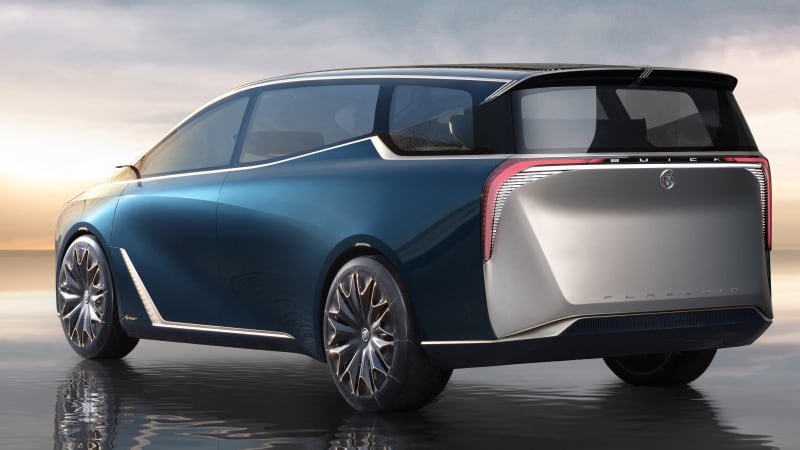 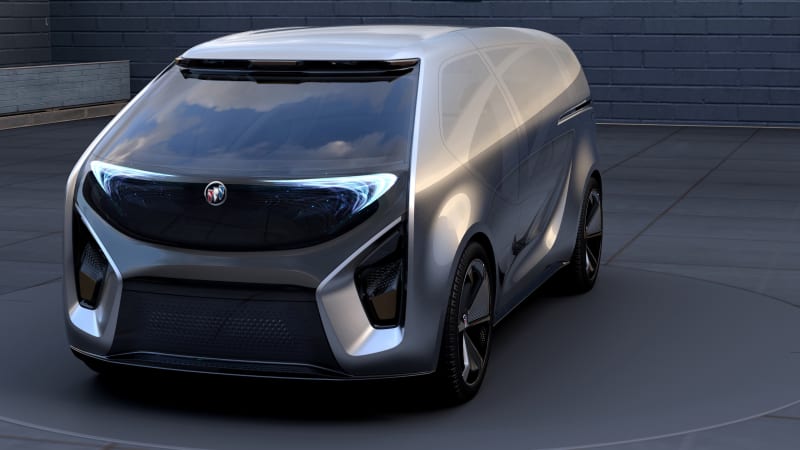 This disconnect of old design facets on future cars isn’t just a BMW issue. Buick recently revealed some spacey concepts: a cool minivan and a pod-mobile that look like they just delivered a carload of time travelers from the 22nd century. Yet these cars are wearing the Buick family’s “tri-shield” heraldry badge from Ye Olden Days, which was unearthed by a Buick designer in the 1930s. It seems like a relic on today’s Buicks, much less tomorrow’s. Imagine being the designer on that project: You’ve created two beautiful concepts, reveries on the future of transportation. Then your boss walks by and says, “Hey, where’s the tri-shield?” Who knows, in the future, jousting might make a comeback.

Yet Buick also sets an example for letting go. A few years ago, it broke with tradition and dropped its “VentiPorts,” aka portholes. The sky didn’t fall.

It’s OK to let go of things that no longer have a purpose. Marie Kondo your car design.

If these big grilles help BMW sell the last generation of ICE cars, cool. Then move on. Define your brand in this century, not the last one.