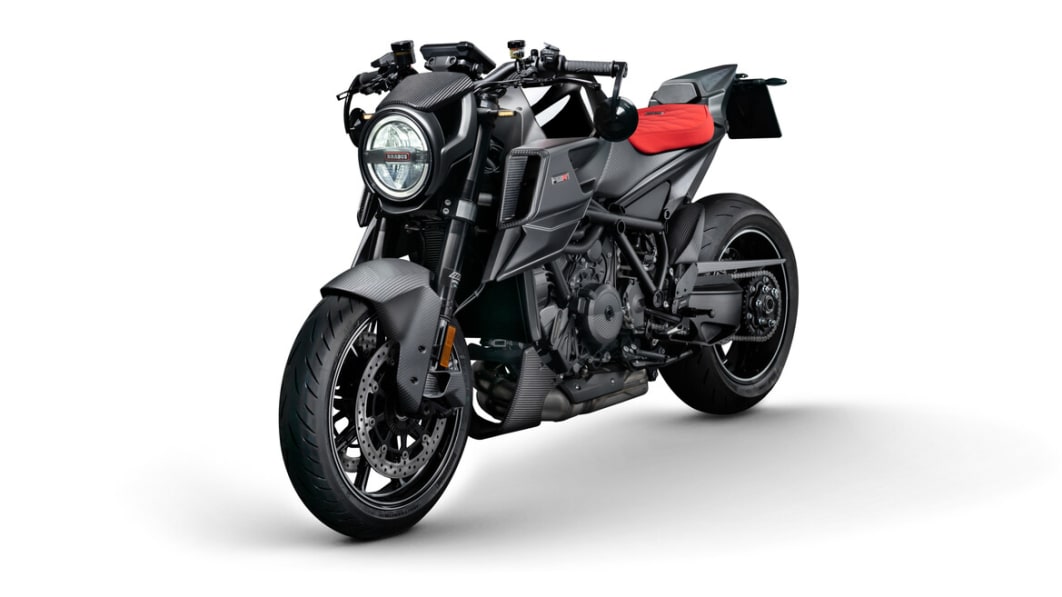 Brabus, the purveyor of wildly powerful Mercedes-Benz vehicles, is branching out into the world of motorcycles for the first time. Mercedes-Benz doesn’t make a bike, so the tuner worked with KTM to turn the 1290 Super Duke R Evo into a limited-edition model named 1300 R.

The modifications made to turn the Super Duke R Evo into the 1300 R are even more drastic than the changes Brabus makes to its cars. Nearly every exterior part has been tweaked or replaced entirely. The 1300 R notably receives a round LED headlight, redesigned side fairing made with carbon fiber, handlebars that are shorter and lower, and a thin, upswept tail. Monoblock Z nine-spoke forged wheels add a finishing touch to the look, but it’s the attention to detail that helps this bike stand out. The brake and clutch levers and the adjustable foot pegs are CNC-machined, for example, and the shift lever can be set to one of three positions (including the option of a reverse shift pattern).

The 5-inch thin-film-transistor screen allows riders to quickly access a variety of data about the bike and its surroundings, and to make adjustments to the semi-active suspension system, which offers six different damping modes. And, this motorcycle was designed for year-round riding: it features five-level heated grips and a heated seat with stitching reminiscent of Brabus-tuned cars.

Power comes from a 1.3-liter V-twin engine rated at 180 horsepower and 103 pound-feet of torque, figures that are impressive considering we’re talking about a bike that tips the scale at 428 pounds. Brabus quotes a zero-to-60-mph time of 3.2 seconds and, for those brave enough to explore the upper limit of the speedometer, a top speed of 170 mph. It’s the same basic engine that powers the 1290 Super Duke R Evo, though it exhales through a Brabus-specific double-pipe exhaust system, and it spins the rear wheel via a six-speed transmission.