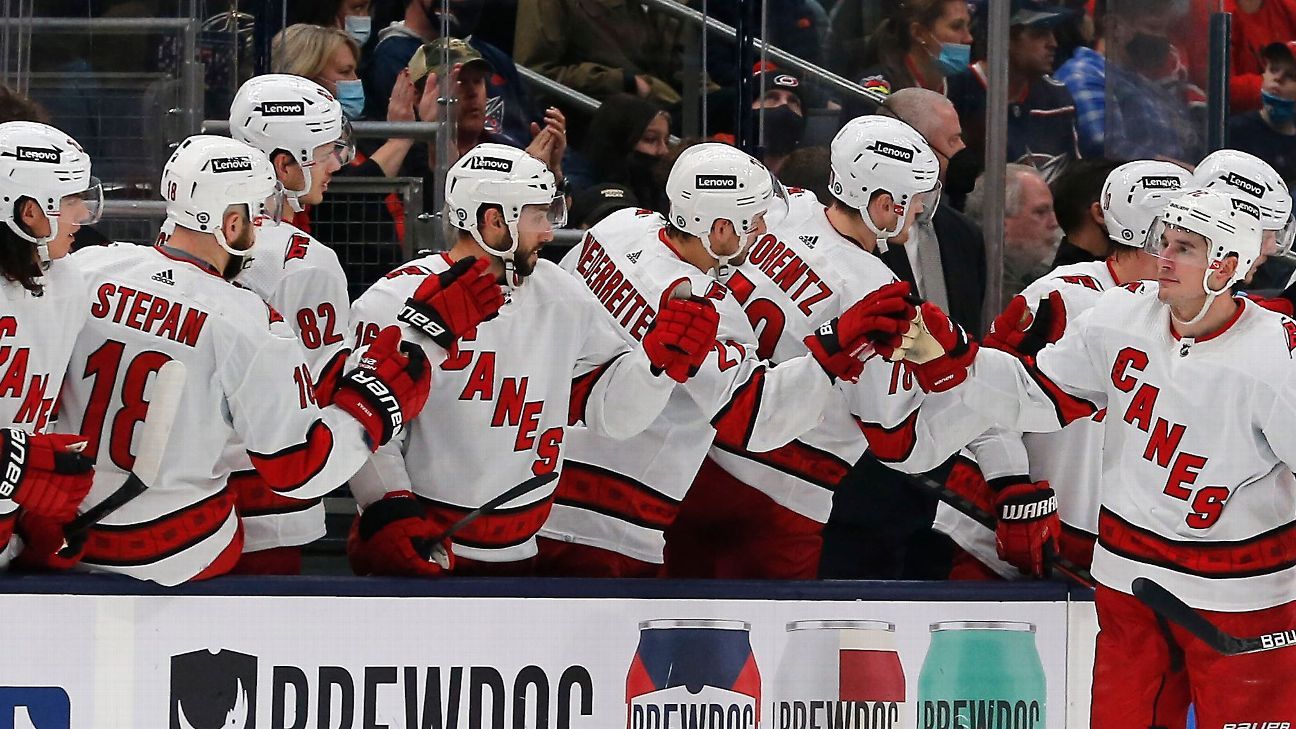 COLUMBUS, Ohio — The Carolina Hurricanes, one of the top teams in the Eastern Conference all season, have bigger plans for later in 2022, like perhaps competing for the franchise’s second Stanley Cup championship.

For now, though, they’ll settle for any type of momentum builder they can get, and they began the calendar year with a doozy.

Steven Lorentz and Brady Skjei each scored two goals as Carolina rallied from a 4-0 deficit with seven unanswered goals en route to a thrilling 7-4 victory over the Columbus Blue Jackets on Saturday.

The Hurricanes scored four times in a span of 3 minutes, 57 seconds in the third period to overcome a 4-2 deficit. They had five goals in the period.

“It was a weird game, we were down, and I still felt we outplayed them,” Skjei said. “We knew to just keep playing the way we were and the goals would come. And they definitely did.”

Nino Niederreiter, Ethan Bear and Andrei Svechnikov all chipped in with goals as well, as Carolina shut down the Blue Jackets for the final 31 minutes of the game as it mounted the comeback.

“We just tried to do what we could to stop their momentum. Let’s be honest, it was all game. It wasn’t like they ramped it up there. We built a lead, but that’s a big, strong team that they just get the puck sometimes and they have it all night,” Columbus coach Brad Larsen said. “That’s a real good hockey team and they just kept coming.”

Frederik Anderson replaced a struggling Antti Raanta in net for the Hurricanes after the veteran allowed three goals on nine shots. Andersen, the beneficiary of an improved defense in the back half of the game, stopped just eight of nine shots to post the victory.

Gustav Nyquist had a goal and two points in an otherwise forgettable performance from the home team. Zach Werenski, Adam Boqvist and Alexandre Texier also scored for the Blue Jackets before the Hurricanes rallied.

“I think that’s something we can learn from them. No matter what the score was, they kept playing their game,” Werenski said of the Hurricanes. “Up 4-0, down 4-0, just play the game the way we know how to play.”

It took Carolina a bit to get there, but the Hurricanes certainly ended the game that way.

“It’s the type of players that we have,” Carolina coach Rod Brind’Amour said. “We have young guys who are very competitive. And I think if you’re that way, and can skate, then you’re going to do well in our system.”

“Hockey is weird. It wasn’t about lack of effort today, by any means. We were not tired, at least that’s the sense I got on the bench,” Werenski said. “I thought we worked hard in the first two periods, got a few nice bounces, and we had a lead. But at some point in a game, we have to take some pressure off our goalies. It seemed like the whole game was played in our end. At some point there, we needed to be smarter.”

The victory was Carolina’s fourth in a row, and it moved it into a tie with the Washington Capitals for first place in the Metropolitan Division. With 47 points, the Hurricanes are tied with Washington and the Tampa Bay Lightning for the league lead.

“I think we’ve played really well, to be honest with you. If you look at the season, I think there are two games that I wasn’t very happy with, so that’s pretty good,” Brind’Amour said, summing up the season so far. “It’s been a pretty good effort so far, top to bottom. Can we get better? Of course.”

In a small sample size on New Year’s Day, the Blue Jackets, for sure, agreed.

“It looks bad because we had the lead,” Larsen said. “But let’s face it. They were the better team.”