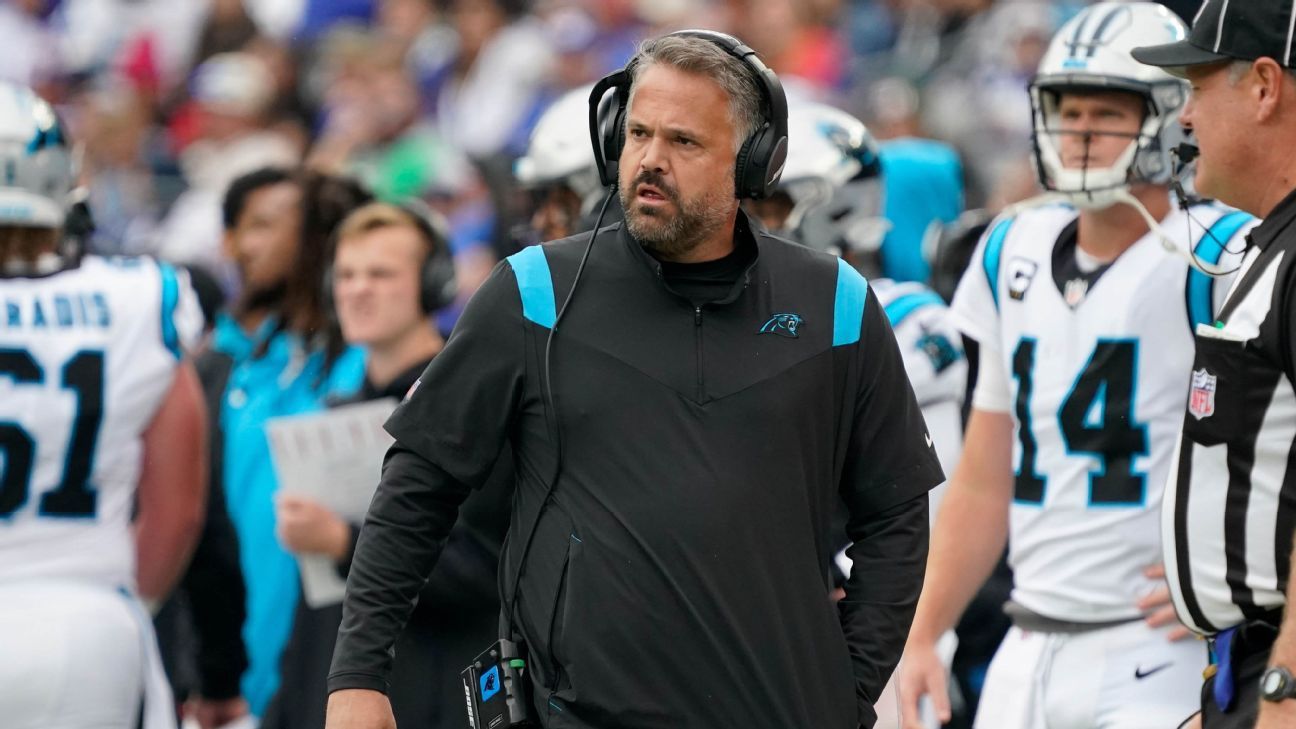 The Carolina Panthers are planning to keep head coach Matt Rhule for the 2022 season and he will begin a thorough search for offensive coordinator next week, sources told ESPN’s Jeremy Fowler.

Rhule, 46, currently has a career record of 10-22 heading into Sunday’s season finale.

Rhule previously fired offensive coordinator Joe Brady with five games remaining. In October, Rhule said he was sticking with Brady but wanted him to commit more to the running game. Brady, however, never committed to the running game to the level Rhule preferred (at least 30 attempts per game).

Panthers owner David Tepper hired Rhule in January of 2020 to succeed Ron Rivera, who was fired with four games remaining in the 2019 season. He gave him a seven-year, $62 million contract in addition to paying $6 million to buy out Rhule’s deal at Baylor.

Tepper, at the time, made it clear he understood the “difficulty” of moving from college to the NFL. Rhule’s only NFL experience before Carolina was as an offensive assistant with the New York Giants in 2012.

Rhule was hired because of his reputation for quickly turning around programs at Temple and Baylor. The Panthers have not made the playoffs or had a winning season since 2017.

Tepper said Rhule fit the job description of “the right mix of old-school discipline and toughness with modern and innovative processes.”

The Panthers were 5-11 during Rhule’s first season, losing nine of their final 11 games.

Injuries have played a role in Rhule’s time at Carolina. Pro Bowl middle linebacker Luke Kuechly, who had a history of concussions, unexpectedly retired shortly after Rhule was hired. Christian McCaffrey played in only three of 16 games in 2020 due to injuries and a total of only 10 games the past two seasons since becoming the NFL’s highest-paid running back.

But no position has impacted Rhule more than quarterback. The Panthers signed Teddy Bridgewater to lead his first team after opting to release Cam Newton, who was limited to two games in 2019 due to injuries.

Rhule moved on from Bridgewater after one season and Carolina traded for Sam Darnold, who was 13-25 his first three seasons with the New York Jets. Darnold started 3-0 this season but won only one of his next six starts before going on injured reserve with a shoulder injury.

After Darnold’s injury, Rhule brought back Newton, who was a free agent after being released by the New England Patriots following training camp. The 2015 NFL MVP, who lost his last eight starts his first go-around with Carolina, went 0-5 as the starter in his return.