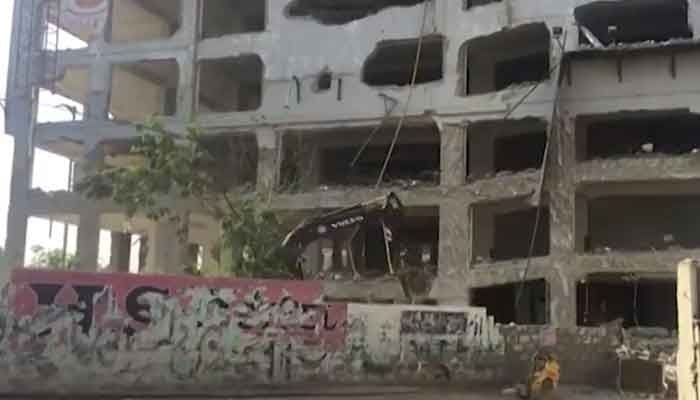 A case has been registered against the authorities responsible for okaying the construction permit of Nasla Tower in Karachi, reported Geo News on Tuesday.

The case has been registered at the Ferozabad police station, in which the officers of the Sindh Building Control Authority have been nominated for issuing permits for the construction of Nasla Tower, said sources.

According to the police, the names of those responsible have been sought from the Sindh Building Control Authority and Sindh Muslim Cooperative Society.

SC orders action against those who issued construction permits

On Monday, the Supreme Court of Pakistan had directed authorities to take action against the officials responsible for issuing the construction permits for the illegal 15-storeyed Nasla Tower building.

Hearing the Nasla Tower case, a two-member bench comprising Chief Justice Gulzar Ahmed and Justice Qazi Mohammad Amin ordered the anti-corruption department to register a case against those involved in approving the building plan. The court directed the police to register a separate case against the officials.

The DIG East has been directed to take immediate action against the officials who had approved the Nasla Tower building plan and present a report to the Supreme Court.

The apex court has also ordered to seize the 780 square yards of the land Nasla Tower was constructed upon and directed the Sindh High Court’s (SHC) official assignee to take possession of the land and stop its sale.

Expressing his annoyance over the slow pace of the demolition process, the chief justice asked, “Such a building is torn down within one hour in the world. What are you people doing?”

On this, Karachi Commissioner Iqbal Memon told the court that 400 labourers were working on the task, adding that five floors of the building have been demolished so far.